A bare cupboard and a payday that is just around the corner. That’s something that every struggling parent just can’t bear to see. There are kids to feed and bills to pay. With every waking moment, the almighty dollar becomes more and more important.

While this may not have been the everyday reality for Sam Oropeza when he was growing up, he can still identify with it. Food may have always been provided, but he knew, even when he was young, that times were tough. Oropeza didn’t have a lavish life while he was growing up. However, right before his eyes, long before he would don the gloves to be a fighter, he saw the best fighter that he knew going toe-to-toe with the cold harsh struggles that come with trying to raise a family on a single income. 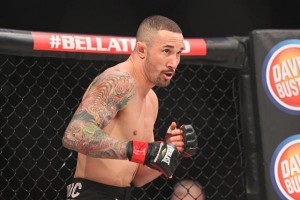 Oropeza’s mother would eventually win the fight. Just like her son, she would manage it in highlight-reel fashion, and in the process she would instill a level of work ethic in her son that still stands to this day.

“Growing up, I was the youngest of six kids. My dad, he made all the money,” Oropeza told Combat Press. “When I was growing up, it was like a real old-fashioned household where the dad worked and the mom took care of the kids. My dad never really made a large sum of money — he sold cars — but he was great at what he did. When he passed away, it was very difficult. My mom had to go back to school and had to go and get a job. We weren’t the type of family that would rely on government assistance or anything like that. I remember as a kid when my mom went back to school, there was no money. Things changed drastically for me. We didn’t really have family dinners anymore. Even though my mom worked her ass off, we kinda had to fend for ourselves.

“You know, it was tough and it was very difficult. When she got back to work, she had to work often, sometimes working more than two jobs. She would clean other people’s houses, and I would see her get up in the morning, exhausted, and she would come home late at night and kinda just fall right asleep ‘cause she had no energy. Growing up, it was hard. It was tough. I actually talked to my mom about it after an article came out, and she said it was through the grace of god that we survived, and she doesn’t know how bills got paid and how we got to school, but somehow we found a way. We survived, and it really made me the man I am today and I’m grateful for that experience growing up.”

Without his struggles at an early age, and without the life lessons that came with them, Oropeza wouldn’t be anywhere close to the position that he is in now.

“What it has done for me is I kinda live day-by-day,” he explained. “And what I mean by that is, I don’t really put too much pressure on. Today, my schedule’s insane. It’s crazy. It’s outrageous. And if I were to step back and look at it, I would be, ‘I don’t think I can handle that.’ And what I do now is I live in the moment. Like right now, I woke up and got a little bit of breakfast into me because I’m cutting weight for my fight and I’m talking to you on the phone not thinking about what I’m gonna be doing when I get off the phone. I think my drive and my work ethic definitely [come from a tough upbringing] because I know that I have to wake up and I have to work hard no matter what I do, whether it’s fighting or not fighting. So, now that I’ve chosen to fight, I’ve gotta work hard, and I’m okay with that. I enjoy it and I look forward to it.”

With his tough upbringing and lack of opportunities, Oropeza’s path in life wasn’t exactly headed towards being a fighter, or any kind of sportsman for that matter.

“It’s funny, because I was the absolute worst athlete growing up,” Oropeza admitted. “I never hit my potential. My dad passed away when I was 10, and he was the one that would keep us in sports. And then after that, my mom was busy with school and working. I had to walk to a friend’s place to get a ride to the games because my mom couldn’t take me. It was hard. Really, the way it all started was, when I was a kid I wanted to be a [Teenage Mutant] Ninja Turtle, that’s all I wanted to do, and as I got older I got a full-time job and did the whole work thing. And I still work full-time, but there was this burning desire inside of me saying, ‘Why don’t you go do something you enjoy doing?’

“The first time I went to a jiu-jitsu gym, I was 19, and the first time I ever went to a boxing gym, I was about 12 and I was hooked. It was like the way a drug addict must feel when they do that first drug, and there was no way I wasn’t gonna not try to do this my entire life. I worked full-time and never thought anything would come of it, and now I’m talking to you and here I am 12-2 as a professional fighter with 12 finishes and I’m very close to getting a UFC contract. It blows my mind, you know? You plant a seed and you water it every day and you nurture it and take care of it and it can turn into something big.”

After spending the majority of his career fighting at welterweight, Oropeza made his middleweight debut at Bellator 130 on Oct. 24, 2014. The change in division proved to be a success, with Oropeza notching his seventh win in a row and his fourth under the Bellator banner. 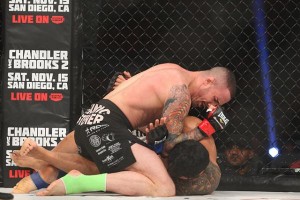 “It just feels so good to be healthy. Why was I doing that to myself?,” Oropeza wondered. “Why was I living a life that was full of suffering and unhealthiness in every area and cutting down to 170 [pounds]? At 185, I just feel that I have an advantage just because I am healthy. This morning I was able to wake up and eat. Yeah, I’m cutting weight, but still, that’s normal. The amount of weight I cut isn’t dangerous and isn’t gonna hurt me in the long run. It actually makes me more efficient.”

With 12 finishes to his name, Oropeza eyes another opportunity on Jan. 17. The Bellator and Strikeforce veteran will seek to continue with his perfect finishing record when he faces Timothy Woods at Global Proving Ground 17: Fighters Against Dog Fighting. Another highlight-reel victory could prompt Oropeza’s career into transition mode once again.

“[Finishing the fight] is the only way I see it. I can’t see myself playing it safe and getting to a decision,” Oropeza exclaimed. “I see me slamming on the gas and getting in Timothy Woods’s face. He’s a game opponent. He’s a game opponent [and] he’s a very good opponent. I’m not gonna do anything stupid. I always say [to] be smart before you’re brave, and when I see that opportunity to win I’m gonna take it. And whether it’s knockout, whether it’s TKO or submission, I truly believe that within that first round I’m gonna get that victory and it’s gonna be spectacular and I’m gonna be getting that phone call from that big organization, the UFC, and they’re gonna say, ‘Can you fight soon?’ — and probably very soon — and I’m gonna say, 100 percent, I want it.”

Sam would like to thank Team Balance, his trainers Aaron Meisner, Ric and Phil Migliarese, Greg Hackett and Brian Washington. He would also like to thank his sponsors: Rick’s Tree Service and Auto Moto Specialists. Follow Oropeza on Twitter: @SammyO85