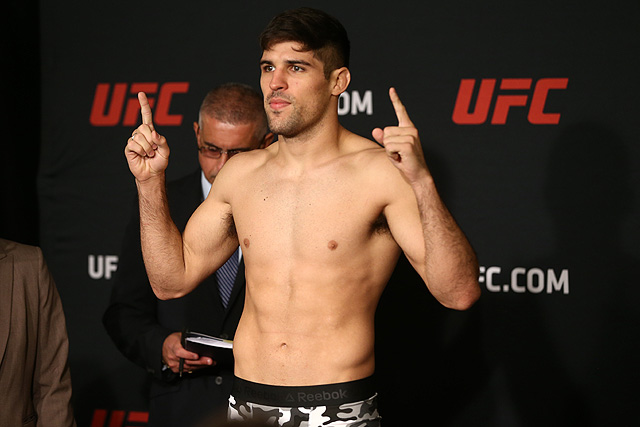 Is Vicente Luque Ready for a UFC Title Shot?

At UFC 265, Brazil’s Vicente Luque scored a signature win, submitting Michael Chiesa in the first round. Afterwards, he called for a title shot. But with Kamaru Usman and Colby Covington’s title rematch just under three months away, a lot of people aren’t looking past it. And Luque’s request is complicated.

The pair’s first fight resulted in a “Fight of the Year” contender. Heading into the fight, it wouldn’t have been out of place to say that Usman and Covington’s careers were mirror images of each other’s. Both men had defeated Demian Maia and Rafael dos Anjos back-to-back and came from strong wrestling backgrounds. They even had the same record.

Although Usman came out the winner, and has defended his title against Jorge Masvidal and Gilbert Burns, I’m not sure things would have been different had Covington won. What I mean is, Covington very well may have had the same lineup of opponents as Usman did for his title defenses.

But this rematch poses a whole different set of circumstances. Usman, with his activity as the champion, has already beaten everyone in the top five besides Stephen Thompson. And even with Leon Edwards maintaining his winning streak against Nate Diaz, he hasn’t convinced enough people that his rematch with Usman would go any differently.

That is where Luque enters the equation. After his submission win, Luque wasted no time expressing his thoughts in the Octagon. It was a pleasant surprise to see Luque, a six-year veteran of the promotion, finally showing he is ready to challenge for the belt. And it was a valid callout.

Luque believes that Usman will get past Covington for the second time in November. In which case, he most certainly has one of the best cases for the next shot. Since his UFC debut at the TUF 21 Finale, he has only dropped two fights, both to welterweight elites Thompson and Edwards.

And Luque is right in that he is the only name in the top five that Usman has not faced. It is also true that Luque is never involved in a dull fight. In his 17-fight UFC career, he has received eight post-fight bonuses. Just to put it into perspective, Tony Ferguson has 11. Not only that, but Usman also seemed to like the idea, responding to Luque’s callout immediately by saying:

But we cannot overlook the possibility of Covington coming out on top in the rematch. In such case, Luque’s hopes for the next title shot diminishes greatly. Covington has not faced anyone in the current top five. The likely challengers to his reign would be Burns, Edwards, or a rubber match with Usman. Either way, it’s going to be a gamble for Luque if he decides to wait for the title shot.

The decision for Luque’s next fight is very much circumstance-based. But he is in no hurry as he is still only 29 years old. Regardless of who gets put in front of Luque next, one thing remains the same for “The Silent Assassin”, he’s a must watch.