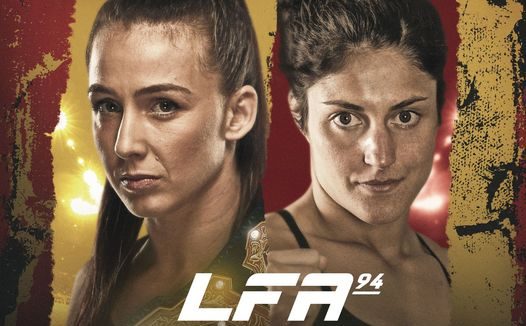 Imagine growing up in Mexico and one day finding out you were taking a family vacation to Disneyland. With bags in tow, the plane lands, and you’re in Canada… forever. That’s the story of how Lupita “Loopy” Godinez, along with her mom, dad and three younger sisters, became a resident of British Columbia.

Godinez moved to Canada when she was 14 years old, but she began training in martial arts when she was only nine in her native city of Aguascalientes.

“I think the fighter has always been in me,” Godinez told Combat Press. “When I was a little kid, I always wanted to do WWE. I didn’t know there was such a thing as MMA. So, as the years went by, I started training judo. I did really well. I was competing all over Mexico and beating all these girls I shouldn’t have beaten.

“Through all of that, I was a teenager and was just hanging out. Then, we moved to Canada, and I was just working out and trying to help out as much as I can, because we immigrated to a new country and everything was tougher.”

The Godinez family basically started from scratch in their new home. They lived out of a hotel for six months, and getting on their feet was a tough journey. They did well, though. They created a new life and made new friends. One of those people was Lupita’s boyfriend, who urged her to take up judo once more.

“I wasn’t doing much,” Godinez said. “I was going to school and working a little bit here and there. So, I went back to judo, and I was competing here in Canada. I was doing well and everything, and then I hurt my knee, so I had to take things slow.”

Godinez worked on rehabbing her injured knee. During this time, a fellow judo practitioner suggested she take up jiu-jitsu.

“I joined jiu-jitsu and thought that was cool,” said Godinez. “Then, I went to watch some fights with my boyfriend, and [I] decided I want to do that. He said if I was serious and wanted to do it, I had to look for a gym and take it seriously.

“My boyfriend’s best friend used to go to my current gym, Titan MMA, so I started training there and told them I wanted to fight. I was horrible. You cannot imagine how horrible I was when I first started. My coach was like, ‘Oh my gosh, I don’t know if you’re ever going to fight.’ I didn’t spar for a year, because I would just turn my back, run away, and curl in the corner of the wall.”

Two years later, Godinez had her first amateur fight. She lost. A rematch followed for her second fight, but she lost again.

“At one point, I was 1-2, but I said I wanted to keep doing it and I really liked it.” said the strawweight fighter. “I kept pushing, and I thought I was good. I just needed to get the hang of the competition. I would get nervous, and I would think too much. After two years of fighting as an amateur, I became a pro.”

Godinez now sits at 4-0 as a professional. Her last win came almost a year ago over Lindsay Garbatt, who was 6-5 going into the bout. It was her toughest fight to date, and it went the distance.

“It was fun, because she was a striker,” Godinez explained. “She is a professional boxer, so it really showed me that my hands are not that bad. I was able to hang with her the whole time. Just stepping into the cage with someone with that much experience — because she has so many MMA fights — it was so cool, you know? I took that fight on two weeks’ notice. I think I could’ve done better, but I didn’t have a full camp. It was just two weeks to try to make the weight and go fight.”

Godinez trains out of Titan Training Center in Coquitlam on the eastern side of the Vancouver area. The gym is home to the Titan MMA team, as well as 10th Planet Jiu-Jitsu Vancouver. She trains under Muay Thai coach Ken Tran and jiu-jitsu black belt Nabil Salameh. She also trains with her two youngest sisters, Ana and Karla, who are standout collegiate wrestlers at Simon Fraser University.

The next challenge for Godinez comes on Friday night, when she makes her promotional debut for the Legacy Fighting Alliance. Roughly six weeks ago, she found out she would be given a title challenge against strawweight champion Vanessa Demopoulos as the headliner of LFA 94. This is a big opportunity for the 27-year-old.

“At first, I thought this is cool,” said Godinez. “I’m one of the best strawweights right now in the world. I’m telling you that, and I finally have the chance to show it. I haven’t had that moment to shine, and I think this is the one. I’m just going to take advantage of it and show why I should be in the UFC.”

The champ Demopoulos is no pushover. The Ohio native trains in the Los Angeles area, splitting her time between Black House MMA, Saekson’s Muay Thai, and One Jiu-Jitsu. She also has a history of participating in professional jiu-jitsu competitions. Her last outing was a Dana White’s Contender Series bout in August where she dropped a tough decision to Cory McKenna. Her previous bout in July resulted in an inverted triangle choke of Sam Hughes that secured her the vacant LFA belt. Godinez is up for the battle.

“I know she’s got a solid ground game, and she’s coming out of a good camp,” said the challenger. “She’s tough. She doesn’t care. She’s going to come forward. I think it’s going to be an exciting fight. I feel the match-up is really good. Honestly, I’m really excited.”

Godinez has come a long way since her judo days in Mexico, but she’s still just getting started. Now, she has the chance to showcase her skills in a fight that airs live on UFC Fight Pass. Everyone knows that an LFA title has serious career implications and comes with the opportunity to compete on the big stage.

“The goal is always to be the best,” said Godinez. “I should be the best no matter what I was doing or where I was. The goal right now is to be the best. The goal is to get into the UFC. The second goal is to stay in the UFC. Because once you get there, it’s really cool, but you want to stay there, right? Eventually, I would like to move up and fight for the [UFC] belt.”