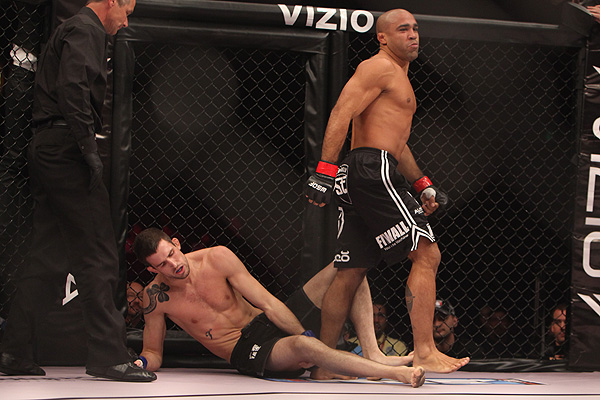 In Florida, sporting events and pro-wrestling were deemed as essential businesses even before the easing of other coronavirus (COVID-19) stay-at-home orders began. The UFC has already used this guideline to host three events behind closed doors, but it’s not the only promotion itching to get back to business. Titan Fighting Championship is now set to follow suit with its 60th show. The event takes place on May 29 from an undisclosed location in the Sunshine State.

Titan FC 60 shines a spotlight on combat grappling. This form of submission grappling allows open-handed strikes in addition to traditional jiu-jitsu techniques. For its inaugural championship, the promotion has pitted Gesias “JZ” Cavalcante against Raush Manfio. In the MMA universe, these two men are not too shabby.

The 36-year-old Cavalcante has been competing since 2004. He’s a Dream, Strikeforce and World Series of Fighting veteran who has also held the Titan FC lightweight title. He spent the entirety of 2019 in grappling competition, but he only posted a 1-2-2 mark. Prior to his new quest, JZ had been on a three-fight skid in MMA bouts.

Manfio, 28, boasts an 11-3 record since making his professional MMA debut in 2011. He, too, has held the Titan FC lightweight strap. The American Top Team fighter dropped the belt to Sidney Outlaw in his most recent outing, and he has not fought since 2018.

The lineup also includes a number of MMA bouts, capped off by the co-headliner between welterweights Ramy Hamed and Frank Carrillo. The 29-year-old Hamed returns to the familiar surroundings of Titan FC after a three-fight stint in the Brave Combat Federation, where he went 2-1. Carrillo, meanwhile, is set for his promotional debut. The Bellator veteran has been out of action since a 2016 loss to future UFC star Mike Perry.

Titan FC is set to crown its inaugural combat-grappling champion in the main-event showdown between Gesias “JZ” Cavalcante and Raush Manfio. What can we expect from this match-up?

It’s difficult to say, really. JZ is a black belt in Brazilian Jiu-Jitsu, but his recent foray into the grappling realm has yielded mixed results. Manfio, on the other hand, has a more balanced MMA repertoire, but he hasn’t managed any submission wins at a high level of competition in the MMA world and even lost by submission in an exhibition bout.

Cavalcante has the more storied reputation. He was once seen as a skyrocketing prospect on the MMA scene after initially compiling a 14-1-1 mark. However, a loss to Shinya Aoki sparked a roller-coaster ride in which he has since gone just 7-11. Ouch! Yet, he only suffered one submission loss in that stretch and went the distance against the famed grappling ace Aoki.

Manfio’s still on the rise in the MMA realm. He did lose his lightweight championship to Sidney Outlaw in his most recent Titan FC appearance, but it was only the third loss of his career. All of his official defeats have come by way of the scorecards, but his brief appearance on The Ultimate Fighter: Brazil 4 ended as a result of a submission loss to Glaico França. His lack of submission victories throughout his MMA tenure could be reason for concern as he goes up against Cavalcante this weekend.

JZ hasn’t exactly been overwhelming the competition in recent years, but he certainly has the grappling skills to top a mixed martial artist who is far more known for his power than his ground skills. Cavalcante has eight career submission wins on his MMA resume, and he was able to submit Jorge Patino in a 2019 grappling match. He’s no sure thing, as evidenced by his decision loss to Alireza Noei and a submission loss to Nicky Ryan, but JZ has to be considered the favorite here.

Does Ramy Hamed add another knockout to his record when he clashes with fellow welterweight Frank Carrillo?

There’s a high probability that Hamed does add to his highlight reel this weekend. The 29-year-old upstart has notched seven of his eight pro wins by some form of knockout. He’s a power puncher who has stopped several formerly undefeated prospects, as well as a number of veterans, with his fists.

The likelihood of a finish for Hamed is only aided by the fact that his opponent has been prone to the knockout and has not fought in more than four years. Carrillo’s last appearance came under the Island Fights banner in a contest where he was put away in the first round by “Platinum” Mike Perry, who would sign with the UFC after just one more regional outing. Carrillo has also been starched by the likes of Yuri Villefort and Ailton Barbosa. The 36-year-old’s nickname might be “The Tank,” but there’s obviously a weakness in his armor that fighters have been able to expose.

Carrillo’s lack of activity hasn’t come willingly. He’s had four fights fall through since his loss to Perry. However, that much time on the sidelines will lead to some rust, which is especially bad for a fighter who already has displayed issues with taking a punch. Hamed should be able to storm through Carrillo’s defenses and deliver a first-round finish.

The short lineup — there are only six scheduled fights, including the grappling headliner — doesn’t leave a lot of choices, but Danny Sabatello’s bantamweight encounter with Raymond Ramos holds some promise. It’s likely to be a showcase for the American Top Team fighter, though.

Sabatello’s last bout ended in a knockout loss in the fourth round against Irwin Rivera, who exited the cage with the Titan FC bantamweight strap. Rivera has since signed with the UFC. Sabatello entered that affair with a perfect mark through six pro fights. He had finished all but one of those prior opponents, but their records left a lot to be desired. Rivera was the first true test for Sabatello. The 27-year-old can use that setback as a learning experience.

Ramos is just 5-3, but he does have the power to finish an opponent. Sabatello can’t sleep on this guy, and his own recent stumble makes his seem far more vulnerable, which might make Ramos more aggressive than he would be against an undefeated fighter.

Ramos will come out of the gates and look to further spoil Sabatello’s young career. This could create the perfect storm for an entertaining little scrap early in the evening.