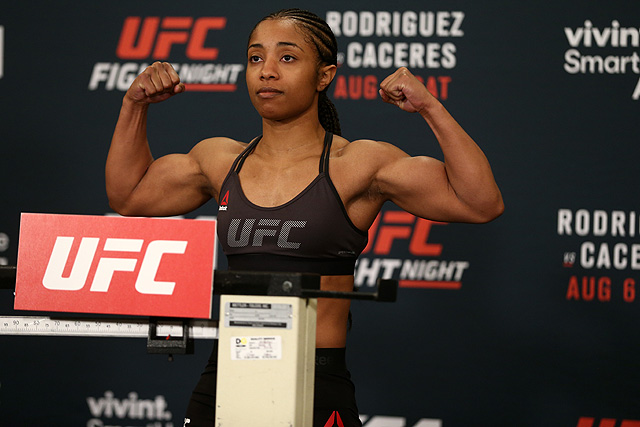 Danielle Taylor is an accomplished fighter. She has fought in two divisions and won a strawweight title in King of the Cage, all while compiling a 9-3 record. Taylor is one of the best athletes in any of the women’s divisions in the UFC. She is strong, durable, explosive and incredibly fast. However, with her very good record, a prestigious regional title and physical tools that allowed her to compete successfully in two weight classes, the question has to be asked: Why hasn’t she done better?

As much as Taylor has accomplished and as well as she has done in her run with the UFC, why hasn’t she done more? Why has a fighter who has been given the right match-ups not been able to capitalize on them and establish herself as an upper-echelon fighter?

Today, we take a closer look at Taylor and the reasons why she hasn’t been able to gain any traction as a consistent or potentially elite fighter.

Taylor is one of the better athletes across the flyweight and strawweight divisions. She’s blessed with a rare combination of strength, hand speed, foot speed and explosive power. These tools allow her to be effective as an outside fighter even though she lacks the length and size that is often attributed to fighters with this style. Her explosive first step allows her to close and extend distance in a dynamic fashion. This is highlighted in her fights against JJ Aldrich, Maryna Moroz, Seo Hee Ham and Jessica Penne. Taylor was able to land with noticeable power against bigger and longer opposition, including a pair of fighters — Ham and Moroz — who hold much better striking resumes.

Taylor’s physical strength and diminutive size also have provided her with viable options in regards to defensive wrestling and grappling. Her lack of height can make it harder for much taller opponents to drop low enough with level changes while getting enough penetration to find a clear entry to her hips. Even in the case when an opponent can do so, Taylor is usually strong enough to stuff takedown attempts or get underhooks and wrench opponents up to effectively neutralize their attempt and limit any efforts to chain together takedowns. Taylor has been taken down by less-than-stellar wrestlers, but she hasn’t been taken down numerous times in a round or over the length of a fight, even when facing fighters who are more established on the ground and more willing to be offensive in attempts to get the fight to the canvas.

As strong and explosive as Taylor may be, her lack of height and length forces her to work two to three times as hard as most fighters. She has to close so much distance, which burns tremendous amounts of energy on both ends. First, she has to spend more time and energy staying at an extended distance so as to not be picked off or backed up by longer fighters. Then, she has to spend huge amounts of energy to close distance to be effective offensively and extend distance so that she can be safe defensively.

Another issue that presents itself is that, for all her strength and explosiveness, Taylor’s lack of size and length has created instances where she has been taken down by mediocre wrestlers and bullied in clinches by fighters who are by no means physical powerhouses. This occurred even in Taylor’s winning effort against Penne, who dominated the clinch position with knees to the body before taking Taylor down off the clinch. In a losing performance against Aldrich, the feat was partially repeated when Aldrich forced Taylor to the fence with takedown attempts and was able to complete a takedown and control Taylor for the better part of a round.

Taylor is a fairly meat-and-potatoes fighter. The beauty of her skills is based largely on the simplicity and directness of her style. At her core, Taylor is a striker who largely works on the outside. She skirts the edge of striking range, leaps in for huge bursts of offense which are largely built around her blistering right hand. She also has a sharp left hook and a powerful, if somewhat limited and predictable, kicking game. Taylor’s prodigious athletic ability and her tendency to let opponents lead allows her to navigate her lack of height and somewhat one-note striking. By allowing opponents to show their hands, Taylor has the freedom to aggressively and heavily counter.

Taylor has shown some competency in her takedown defense and defensive clinch work. She has shown some flashes in regards to offensive takedowns, but she makes her bones defending takedowns and limiting clinch opportunities via the extended range she chooses to work at and her tendency to counter rather than lead. She doesn’t get overly aggressive over overextend herself and walk into takedowns. By staying at long range and using a low output of strikes, Taylor can effectively control the pace of the fight by setting traps and dictating when and where exchanges occur.

Taylor has limited depth and nuance in her fight game. She has shown little offensive grappling skill. Taylor has only one submission win. More importantly, she has shown no real ability to counter when taken down. She doesn’t create scrambles or work back to her feet when an opponent has taken her down and established position. Aldrich and Penne aren’t elite wrestlers or grapplers, but they keyed in on this weakness from Taylor. This is concerning, too, in a division full of elite wrestlers and grapplers. Felice Herrig, Michelle Waterson, Alexa Grasso, Randa Markos, Tatiana Suarez, Rose Namajunas, Jessica Andrade and Karolina Kowalkiewicz are just a few of the fighters capable of repeating and building off of what the aforementioned Aldrich and Penne did.

On the feet, Taylor has been shown to be effective in spots. However, she hasn’t been able to have sustained success unless an opponent has served themselves up for her particular brand of striking. Taylor’s biggest issue is similar to the one that plagued former The Ultimate Fighter winner and light heavyweight champion Rashad Evans. She is a very low-output striker who relies exclusively on her ability to counter with large bursts of offense. A fighter who has extended periods of inactivity will be outworked by an opponent even if the opponent isn’t particularly effective in their aggression, as was the case with Aldrich and Moroz.

Taylor’s style is reliant on the opponent showing their hand. When facing another counter-based fighter or a fighter who is willing to be patient, Taylor becomes as vulnerable as her opponent. Any moment of standout offense can turn the tide against her. Even if there isn’t a moment of standout offense, she still leaves herself at the mercy of the judges’ ability to process what they are observing, because neither she nor her opponent will have done enough to clearly separate themselves.

Taylor hasn’t shown any ability to put shots together when she counters, either. She often resorts to ones and twos when she has the speed and explosiveness to land threes, fours and fives. Much like Evans, Taylor faces an inability to make the most of all the work she does and energy she expends in getting into range. This hinders her ability to maximize the physical advantages she has and the damage she does. It also creates issues defensively, as the amount and type of strikes she throws are fairly predictable and allow opponents to counter her overtures or disrupt them.

Taylor is a talented fighter with abnormal amounts of power, strength, explosiveness and quickness. While she has an established identity and refined style, she doesn’t have a lot of depth and nuance in her striking game, much less her all-around MMA game. Taylor’s talent has taken her far in the world of combat sports, but versus seasoned, gifted and skilled opponents, her inability to use her athleticism to maximize her technical tools limits her.

For Taylor to become the best version of herself and a legitimate contender in the UFC’s women’s strawweight division, she is going to have to diversify her skills and show the ability to make adjustments, whether that means punching in combination, coming in behind a jab, using offensive wrestling consistently or throwing kick/punch combinations instead of one-note strikes. There are too many fighters who are capable of neutralizing Taylor’s physical tools and exploiting her shallow technical game and the predictable game plan that comes along with it.