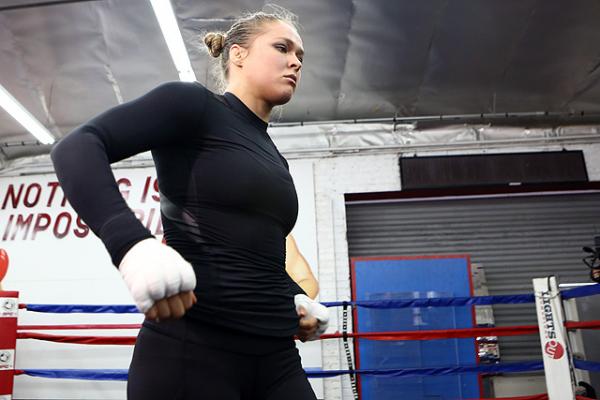 Don’t Forget Who Ronda Rousey Is

When Rousey returns in December to face current bantamweight champion Amanda Nunes, she must also be given credit for what she has meant not only to the UFC, but to women’s MMA in general.

Sure, the aforementioned Holm posted a very convincing win over Rousey, which at the time was devastating to her career, but if there’s anything we have learned in 2016, it’s that a win can change everything. The UFC’s mainstream stars — we’re talking Conor McGregor, Jon Jones and, naturally, Rousey — can get their fan base back quickly with a win.

After McGregor lost to Nate Diaz at UFC 196, he earned a majority decision victory in a rematch at UFC 202. His superstar image seemed to grow through it all. Jones had been out of action for over a year, but he came back to get a victory over Ovince Saint Preux at UFC 197. In the case of the troubled Jones, all has seemingly been forgiven.

A win at UFC 207 for Rousey not only means that she will recapture the women’s bantamweight title, but it means all the fans who jumped off her bandwagon — and down her throat to criticize her actions following the loss — will be right back on the wagon. It also would mean Rousey, who paved the way for women inside the Octagon, would be back on top of her division.

Rousey has plenty of other options outside the UFC, including her movie career, but the ball would be back in her court inside the UFC. There have been plenty of changes since UFC 193, where Rousey lost the belt to Holm. Holm subsequently relinquished the title to Miesha Tate, and Tate dropped the title to the aforementioned Nunes. If Rousey is able to recapture her title, she will have no shortage of challengers.

Some fans and critics will never forget the head kick Holm delivered. The kick not only knocked out Rousey and cost her the belt, but it ended the image of invincibility that the Olympic judoka carried throughout her UFC career. The women’s bantamweight division grew even stronger when she was away, with Tate and Nunes headlining UFC 200, and it seems that none of the women bantamweight fighters fear Rousey anymore.

So, with UFC 207 set for Friday, Dec. 30, at the T-Mobile Arena in Las Vegas, another chapter in Rousey’s historic MMA career will be written. Win or lose, let’s not forget what Rousey has done for the UFC and for women’s MMA. She’s disliked by many and mocked by even more, but the former champ became a trendsetter in the UFC for women to be just as important as men in the business.

Rousey shouldn’t focus on whether or not she’s feared by fighters. She shouldn’t worry about shutting up the naysayers, either. The only focus Rousey needs to have is on recapturing the title she brought into the UFC. Rousey is more than a media-created phenomenon. She’s more than that girl who got beat up by Holm. Ronda Rousey is the biggest star in UFC history, and she’s coming back with a vengeance.