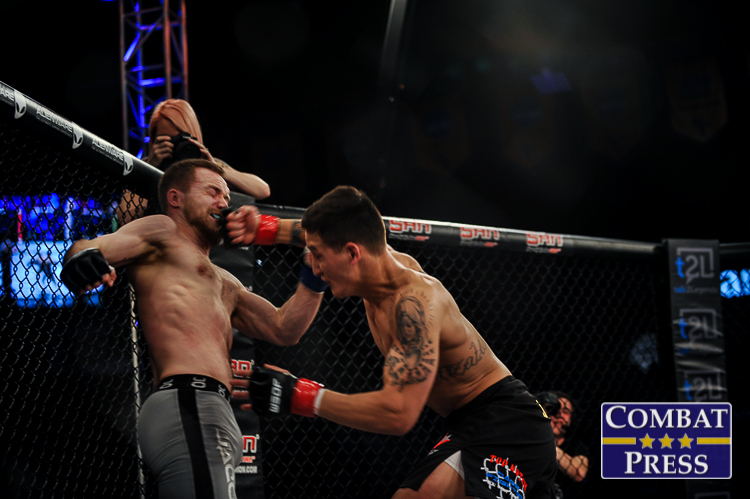 The Legacy Fighting Alliance is the latest major American promotion to return to action, and the company sure came up with a great headliner for its first show since March. The organization has paired undefeated featherweights Justin Gonzales and Jake Childers in a showdown for the vacant 145-pound belt.

Gonzales, a native of Greely, Colo., went unscathed through nine amateur appearances. Many of those fights came under the Sparta Combat League banner, where he’s also spent much of his pro campaign, but he also had an amateur fight on a World Series of Fighting card. Regardless of the setting, Gonzales clobbered his opponent to take a TKO or knockout. He turned pro in July 2016 and finally ran into someone he couldn’t stop when he met Jordan Titoni at SCL 50. The fight went the distance, but Gonzales still picked up the win. Since then, the 29-year-old has added another nine victories, including an SCL featherweight-title win and a unanimous nod in an appearance on Dana White’s Tuesday Night Contender Series. The “J-Train” has picked up three finishes via strikes and one submission along the way.

The 31-year-old Childers opted for a long stint at the amateur level, where he compiled a 14-4 record. “The Working Man” finally made his pro turn in 2017. He stuck to low-level competition, including a 10-14 opponent, through his first five pro fights spanning a number of different promotions. Childers made his first LFA appearance in a February 2019 win over prospect Josh Marsh. His next two contests fizzled before he returned with two big first-round finishes, including a 13-second stoppage of Jamey Simmons.

Gonzales and Childers are exciting finishers. Gonzales can never be counted out from scoring a knockout, but his best asset isn’t his stand-up game. He does more damage with ground-and-pound, and he excels at changing levels to score the takedown. Gonzales succeeds in gaining dominant positions on the mat, and he can move around and maintain control for long stretches. Gonzales fights a very smart fight. That more cautious approach has led to more decisions as a pro, though, and could provide Childers with more time to find a finish of his own.

That’s not to say Childers needs a lot of time. The knee he delivered for the finish on Simmons was followed by a sub-three-minute starching of Nate Richardson, who was knocked out via a slam. Childers has also scored first-round submissions of two opponents. While he does have several ammy losses, they’ve hardly come against bad fighters. Justin Wetzell has gone on to post five wins over six pro fights, Cain Lugar is now 3-1 as a pro, and Childers avenged his loss to Jared Richardson, who is now 7-1 at the amateur level. Only Brent Lee, who is 0-1 as a pro, hasn’t found sustained success.

Despite his recent pair of knockouts, the Illinois-based Childers is more likely to hunt for the submission. He’s a strong wrestler, but he does have to be careful when he shoots for a takedown. He can get careless and leave his neck out there for the taking. Childers is a solid grappler who has recorded four tapouts as a pro.

This figures to be an evenly matched battle of top featherweights. The UFC scouts will certainly have their eyes on this one, and the winner could land in the big show for his next fight. Gonzales could always work his way to a decision, but Childers will keep the pressure on. Childers is on a roll, and he’ll add another win against by far the toughest opponent he’s ever met.

KSW 53 headliners Mateusz Gamrot and Norman Parke have met twice before. The rivalry has been a highlight for the promotion, too. Gamrot emerged with the unanimous nod at KSW 39, but the rematch at KSW 40 was marred by an eye injury to Parke that caused the fight to end in a no-contest. Now, the pair go at it again with the lightweight belt on the line.

The 29-year-old Gamrot debuted in 2012 and won his first three fights before joining KSW. The shift in organizations meant an upgrade in Gamrot’s competition. He kept winning despite facing the likes of Mateusz Zawadzki, Tim Newman, Łukasz Chlewicki, Rodrigo Cavalheiro, Marif Piraev, Mansour Barnaoui, Renato Gomes, Grzegorz Szulakowski, Kleber Koike Erbst and UFC veterans Andre Winner and Parke. The Polish fighter added the KSW featherweight title to his trophy case since his last encounter with Parke, and he also added another lightweight victory, albeit in a non-title affair. Unfortunately, Gamrot’s run hit a snag in 2019 when he expressed frustration with his pay and remained on the sidelines. KSW opted to crown interim champions in both the featherweight and lightweight divisions, with the latter belt ending up around Parke’s waist.

“Stormin” Norman debuted in 2006 with a loss to Greg Loughran before cranking out 10 stoppages. He ran into another setback when he met future UFC fighter Joseph Duffy. After the loss to Duffy, Parke went on another six-fight winning streak and then entered The Ultimate Fighter: The Smashes competition, where he defeated Richie Vaculik and Brendan Loughnane to advance to the finals opposite Colin Fletcher. Parke outworked Fletcher to earn the unanimous nod and win the show’s lightweight competition. Over his next four Octagon outings, he added victories over Kazuki Tokudome, Jon Tuck and Naoyuki Kotani and fought to a draw with Leonardo Santos. That’s when things fell apart for the Irish fighter. His grinding style caused him to lose close decisions to Gleison Tibau and Francisco Trinaldo. He got back in the win column against Reza Madadi, but then suffered his third loss within four fights when he fell on the scorecards against Rustam Khabilov. Parke was jettisoned from the UFC and landed back in the European circuit, where he notched victories over Andrew Fisher and Paul Redmond en route to a short-lived KSW lightweight title reign that ended when he lost to Gamrot. After the pair’s botched rematch, the 32-year-old added five more wins to his record and claimed the KSW interim lightweight belt.

Prior to his entry into the UFC, Parke was a solid finisher who had tallied 12 submissions, three knockouts and just one decision. His losses had to that point consisted of submission defeats. Once he made it to the TUF finals, however, Parke became a grinder. He has gone the distance in all but one of his subsequent fights. His only finish in this stretch was a knockout against the aforementioned Kotani. The black-belt judoka and skilled wrestler relies heavily on cage control and clinch work to grind out his opponents and score points with the judges.

Gamrot is pretty familiar with this strategy. After all, the Polish fighter has seen the scorecards in nearly half of his own fights. He fought to a close 29-28 decision over Parke in their first meeting, and Parke claimed Gamrot bit his finger at one point in the contest. In the rematch, Parke endured a low blow and two eye pokes, the second of which led to the injury and the end of the fight.

Parke has never been an easy out, so Gamrot is unlikely to get the job done in this third meeting. The Polish fighter learned that takedowns were a bad option against Parke after the Irishman repeatedly stuffed him on every shot. This led to primarily a kickboxing bout in the rematch, with neither man gaining a clear-cut edge before the fight-ending eye poke. It’s likely to be another close affair in this third meeting that ends with the reading of the scorecards. If Parke maintains the adjustments he made in the rematch — more forward pressure — he could just pull out a close one here.

Russia’s Gorilla Fighting Championship organization was one of the last promotions to scrap an event in March as the coronavirus (COVID-19) pandemic raged around the world. Now, as fight promoters start to once again host events, GFC brings fans its 26th offering. Light heavyweight prospect Vladimir Seliverstov was set to compete on the aforementioned March show, and now, after four months, he’ll finally get his chance when he meets veteran Roman Gudochkin.

SBE Academy’s Seliverstov has a lot to prove after suffering his first pro loss in his last outing against Oleg Olenichov. The fifth-round stoppage brought an end to the Russian’s perfect record that extended to his 2013 debut. The Battle on Volga regular had steamrolled his opponents to the tune of seven knockouts and three decision nods before encountering Olenichov in his GFC debut.

The 28-year-old Gudochkin almost seems like a handpicked foe to rebuild Seliverstov’s confidence. The “Russian Gladiator” has posted a disappointing two wins through his last six fights. After kicking off his career with a pair of losses in 2018, Gudochkin had been on a nice nine-fight winning streak before his recent struggles. Three of his four recent setbacks came against significant steps up in competition, while his biggest victories include a 1-0 adversary and a 5-15 opponent.

This is definitely Seliverstov’s fight to lose. Barring a huge mistake or a lucky punch, he should have his way with Gudochkin. The SBE Academy product has a tendency for quick starts. Gudochkin is unlikely to make it out of the first round. This should end in an early knockout for the Russian prospect.

[Ed. Note: Out of Obscurity has been on hiatus due to a lack of MMA events during the coronavirus (COVID-19) pandemic. The results listed below are for fights previewed in the March 18 edition of Out of Obscurity.]