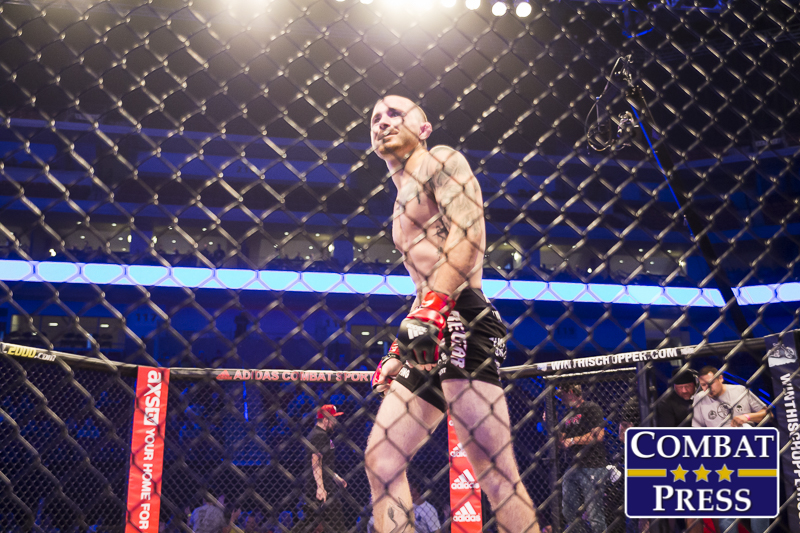 UFC on ESPN+ 27’s Darrick Minner: Don’t Count Him Out

Do not count him out. He’s been around a long time, and it’s been more bad luck than anything else that he has yet to get the contract he’s been chasing since turning pro in 2012.

Nebraska’s own Darrick Minner has had his fair share of trials and tribulations in life. However, the co-owner of Minner-Gray Performance & Fitness in Nebraska City has always managed to pull himself up and get back to work no matter what happened.

Minner is one of a select few MMA fighters in history that can say he has 34 pro fights with less than 10 percent making it to the judges’ scorecards. All but two of his 24 wins were by stoppage, and all but one of his 10 losses have been the result of a finish by his opponent. He may not always come out on top, but fans know they can expect the proverbial fireworks, all bullshit aside.

“I just like to get in there and grind,” Minner told Combat Press. “That’s just the way my life has been. We’ve talked a lot about the way my life has been. My life has just been about put[ting] your nose down and go[ing]. The way I’ve always lived by in fighting is that I’m going to get in your face and let you know I’m there. I don’t know if it’s live by the sword and die by the sword. That’s just what happens.”

Whether it’s by design or not, Minner’s fighting style has opened up some big opportunities for the three-division fighter. Whether it’s been as light as 135 pounds or as heavy as 155 pounds, he has fought just about anyone they put in front of him. Minner has won titles at featherweight and lightweight in the regional Dynasty Combat Sports, and he has fought inside the cages of the Resurrection and Legacy Fighting Alliance, Victory FC, and Dana White’s Tuesday Night Contender Series. He has been really close to cracking into the UFC many times, but, as the story goes, he has stumbled at some of the most crucial moments.

In August, Minner was invited to face the highly touted Herbert Burns on the Contender Series. If the name sounds familiar, it’s because Herbert is the younger brother of UFC and grappling vet Gilbert Burns. Minner came out laying heavy leather, but, by the midpoint of round two, he was caught in a triangle choke and had to tap. This did not sit well with the 29-year-old.

“When I lost to Herbert, I was like, ‘Damn, I don’t know if I have it. What do I have to do?’” Minner admitted. “My coach said I performed well and was kicking his ass before I got caught. I seemed to be on the end of that a lot. I’m beating the shit out of a guy and then I get caught.

“A week goes by, and then my normal self kicks in, and I need a fight, so what are we going to do? Then, I get the call, because Midwest Championship Fighting wanted a high-level main event, and they brought Terrance McKinney in to fight me. I was like, he’s good and he’s a Contender [Series] vet. So, I come in and I beat him and then nothing really got talked about.

“I started to get down on myself. I defended my title in Dynasty Combat Sports in December, but that was probably the worst I’ve ever felt, because I didn’t give a shit. I did, but I didn’t. I didn’t really give a shit about [Charlie DuBray]. He’d been talking shit for seven years, but I didn’t care. Then, I got a little hyped for that, because I wanted to shut him up. He’d been running his mouth forever on the local scene. I went in there and got that submission, but I didn’t know what was next.”

DCS has been putting on shows in Nebraska for almost seven years. The company is owned by DC Management, which in turn is co-owned by Minner’s manager, Andrew “Train” Lee. Train has connections with a lot of major regional promotions, as well as the UFC. Whenever he gets a chance to throw one of his guy’s names in the hat, he’s all over it. Last week, it was Minner’s turn.

“We were actually told that one guy dropped out of that Aalon Cruz fight [at UFC on ESPN+ 27],” Minner said. “From what I know, I was one of three or four options for that guy on the card. When they gave him the option, he didn’t choose me. He chose somebody else. So, I kind of knew that.

“So, I started staying ready and then I saw Chas Skelly was pulling out [against Grant Dawson], and I texted Train, ‘Yo, bro, Dawson doesn’t have an opponent. What’s up? Text [UFC matchmaker] Sean Shelby and see if he’s got an opponent yet’ — and that was just out on a limb.”

Minner went about his business. He was helping his manager prepare for the DCS show last Saturday, close to his home in Syracuse, Neb. There was some shake-up in the light heavyweight division for that card, which warranted a phone call with Train.

Shelby had texted Train and told him to check his email. Train responded that Minner was in, but had yet to get a confirmation from the UFC matchmaker.

“At this point, I’m thinking they probably offered it to somebody else,” said Minner. “That’s just my luck. Somebody else probably got offered and said yes before I had the chance to. For a half hour, I’m pacing back and forth in my house, and [Train] finally called back and said they texted 100 percent. So, at 11 o’clock, I went and busted out an hour of cardio, because of the adrenaline rush I was on.”

Just like that, Minner was finally under contract with the UFC. This happened last Wednesday. Now, in three days, he makes his Octagon debut at UFC on ESPN+ 27 against the aforementioned Dawson, who is a familiar face in the Midwest fight scene.

Dawson was born in Wisconsin and grew up in Stromsburg, Neb., where he wrestled in high school and started training in MMA when he was 17. He showed up in the DCS promotion as an amateur the same year Minner turned pro. After several fights there, he turned pro himself in 2014. Dawson compiled an 11-1 mark to punch his ticket into the Contender Series in 2017, where he scored a second-round rear-naked choke victory in front of UFC boss Dana White. He has since gone 2-0 in the UFC.

In April, UFC on ESPN+ 31 lands in Lincoln, Neb., which is a short drive from Nebraska City. Minner, like many Nebraska fighters, was chomping at the bit to get on that card, which is headlined by his former teammate Anthony Smith, who actually grew up in Nebraska City.

“A week before I got the call [for UFC on ESPN+ 27], I started a camp,” Minner explained. “I was like, this is my last shot. Maybe I will get on UFC Lincoln. So, I started hitting it hard. Knowing my life, my birthday is on [April 28], and my baby is due [May 1], so I thought I’d get the call for the [April 25] card, just to cause stress in my life — like my girlfriend would go into labor on weigh-in day or something. That’s just how I predicted it in my head.”

While Minner already trains a couple hours per day at Premier Combat Center in Omaha and at his own gym, he had already amped things up while not realizing he would be fighting this weekend. It’s just a testament to the type of man and the type of fighter that he is. This is a true portrait of why all aspiring fighters should stay ready.

“Here we are,” Minner said. “I kept my nose to the grindstone, and I didn’t know what I was going to do. I kept practicing and doing my thing, and it finally paid off. This fight, I think, is perfect for it. I’m just going to live by it or die by it, but I’ve got shit to lose. And the way he fights, I feel like if I put it on him, he’s going to go into desperation.”

It’s been a long road for Minner. His 30th birthday is approaching in just a couple months, but he’s really just getting started. This fight will be the 35th of his pro career, and he’s already shown he has the work ethic, the skills, and the experience to compete with the best. Less than a year ago, he was ready to hang it up. Instead, he stuck to his guns. On Saturday night, at the Chartway Arena in Norfolk, Va., he will have the chance to show the world that this is where he belongs.

“I feel good now,” Minner said. “It’s a whole different ball game once I signed this UFC contract. I’ve said it before, but I’ve fought tougher cats outside the UFC than some of them have fought inside the UFC. The whole thing with me is that I’ve had 34 pro fights, and these guys are 13-1, 14-1, but they’ve really fought nobody. They’ve had one or two tough fights in their career. My goal is to make my mark. You can’t count the guys like me out.”