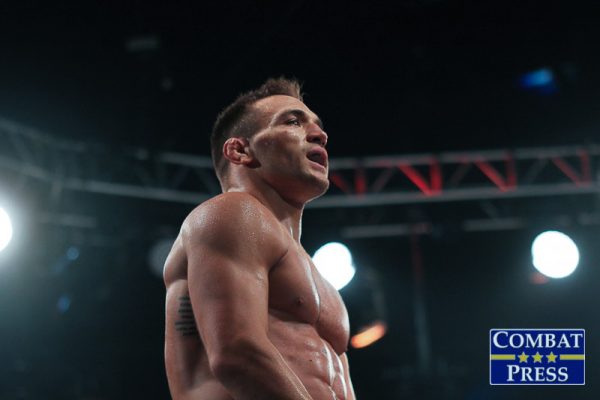 Last weekend’s UFC on FOX 29 main event delivered big time. It’s been said that Justin Gaethje is must-watch TV when it comes to exciting MMA fights, so when the “Diamond” Dustin Poirier faced off against the local favorite last Saturday night in Glendale, Ariz., all eyes were squarely focused on the action inside the Octagon.

The lightweight division is the bee’s knees. It’s not possible for the UFC to book two of the top 20 155-pounders and generate a boring fight. Event after event, the lightweights either steal the show or deliver on the main-event stage.

Another highly regarded lightweight competed last weekend, albeit under the Bellator MMA banner. “Iron” Michael Chandler headlined Bellator 197 in his old stomping grounds of St. Charles, Mo. Unlike Gaethje, who failed to get his hand raised in front of the hometown fans, Chandler was victorious. He looked to be in the best shape of his fighting career, too.

Chandler is undoubtedly one of Bellator’s most talented and marketable fighters currently under contract. He doesn’t need a piece of gold to remind us that he is among the best 155ers in the world. After the way Chandler dismantled a very tough Brandon Girtz, just how good is the former Bellator champion?

ESPN actually has Chandler ranked at No. 7. More often than not, however, Chandler was ranked just outside the top 10.

While some of the sites have Chandler ranked low, he could beat the majority of guys ahead of him on those very same lists. He should rank higher than those guys he can beat. Not many 155ers can get the best of Chandler right now. He has really found the sports psychology “flow,” as he calls it.

Some people may knock Chandler because the level of his competition in Bellator hasn’t been of the UFC caliber. However, he can only fight those Bellator puts in front of him. The times he has been inside the cage with UFC-caliber opponents like Eddie Alvarez, he did more than hold his own. He holds victories over UFC veterans Alvarez, Benson Henderson and Akihiro Gono and also topped future UFC fighter Marcin Held. He competed in close fights in losing efforts against Alvarez and future UFC fighter Will Brooks.

Perhaps one day we will get to see Chandler inside the Octagon. For now, Bellator has one of the best lightweights in the world on its roster.