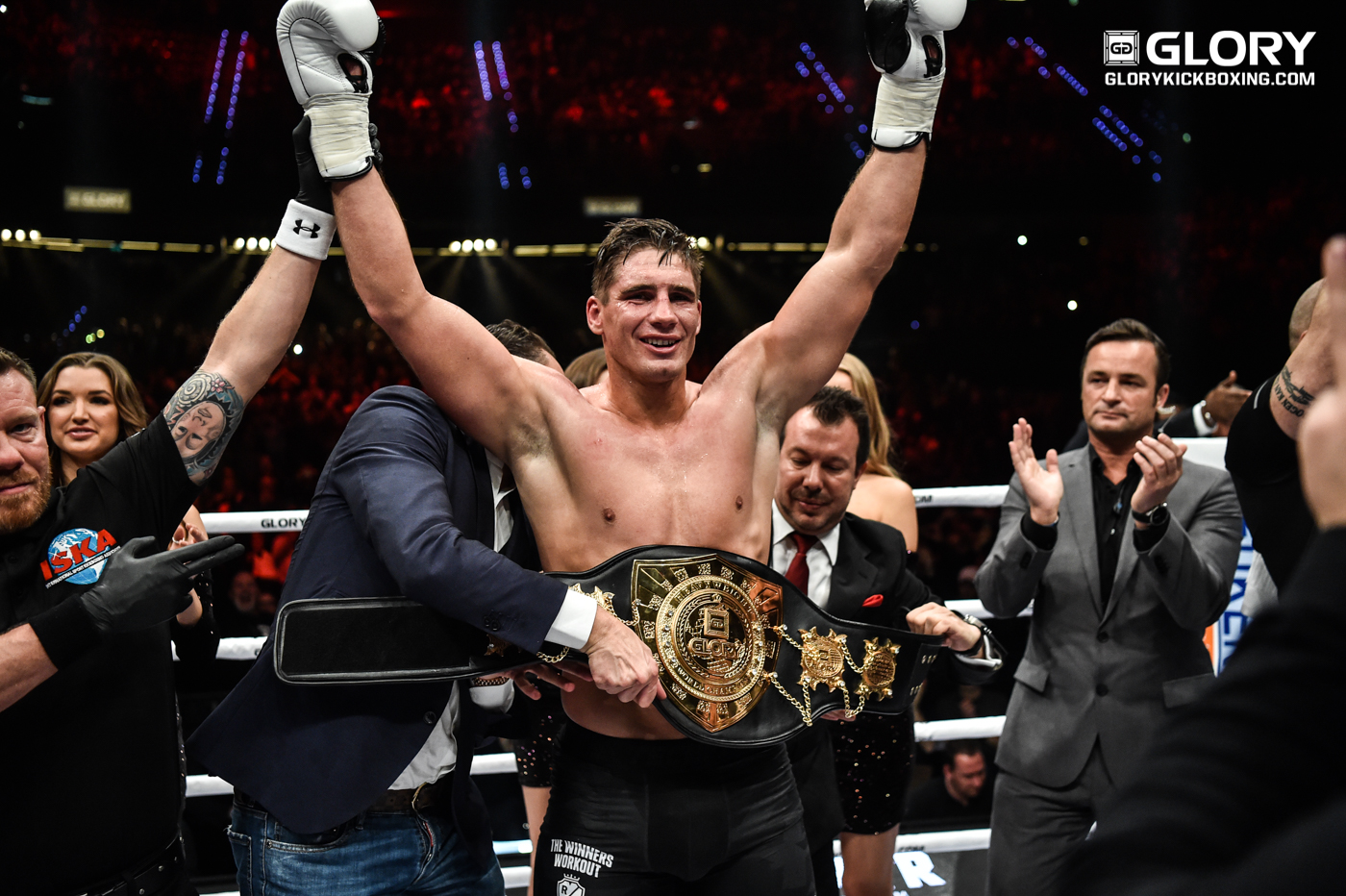 On Saturday, Sept. 29, GLORY Kickboxing returns to the Johan Cruijff Arena in Amsterdam, the Netherlands, for GLORY 59.

In the night’s headliner, GLORY heavyweight champion Rico Verhoeven chases history when he attempts to make his eighth title defense. Verhoeven puts the belt on the line against top-10 challenger Guto Inocente, who has won six of his seven fights in GLORY. Verhoeven, known as “the King of Kickboxing” due to his reign of dominance over the heavyweight division, is currently riding a 16-fight winning streak inside the GLORY ring.

Elsewhere, the GLORY featherweight titles will be unified when a pair of familiar foes, reigning world champ Robin van Roosmalen and interim belt holder Petchpanomrung Kiatmookao, meet for the second time in 18 months. Van Roosmalen, GLORY’s only two-division world champion, has defended his belt twice, with wins against Serhiy Adamchuk and Kevin VanNostrand. Since losing a controversial decision to the champ at GLORY 41, Kiatmookao has won four fights inside of the promotion, including back-to-back “Knockout of the Year” candidates over Zakaria Zouggary and Abdellah Ezbiri, a dominant win over Xie Lei, and a decision nod over the aforementioned VanNostrand to win the interim title.

Top-ranked lightweights Tyjani Beztati and Chris Baya also compete on the main card while in search of a much-needed victory.

Rico Verhoeven looks to set the promotional record for title defenses when he goes up against Guto Inocente. Can the heavyweight champion continue his dominant run, or does Inocente have the style to play spoiler? If Verhoeven claims victory, where does he go from here?

Inocente is an intriguing match-up for the champion. The Brazilian likes to create distance, explode in with powerful punches and kicks, and almost exclusively fight from the outside. This style has led him to success against some of the top heavyweights in the division, including Benjamin Adegbuyi, D’Angelo Marshall and Hesdy Gerges. However, none of those bouts were easy for Inocente. There’s an argument to be made that he potentially could have lost all three fights. Inocente was able to convince the judges he was the winner because it was apparent when he was able to land the more damaging shots against his opponent.

Inocente will have a limited window of opportunity in this contest. The Brazilian throws so much power in his diverse kicking attack and power striking game that he leaves very little left in the tank when the third round rolls around. Against a fighter with superior stamina and a long history of five-round fights, it’s only a matter of time until those opportunities start getting closed off. As evidenced in Verhoeven’s fight with Jamal Ben Saddik, the champ can be stunned and hurt, but he is extremely difficult to take out of a fight with one strike. This will continue to be the case as Inocente tries to work his kicks and punches from the outside until Verhoeven is able to wear him down with forward pressure, counter strikes and a volume that the challenger cannot match over five rounds.

If Verhoeven is able to become the most dominant champion in GLORY history, then there are still a few challengers for him left inside of the promotion. The most obvious candidate is Badr Hari, who remains the biggest name in heavyweight kickboxing by a large margin. Verhoeven topped Hari when the Moroccan star bowed out due to injury in 2016. Hari was able to secure a victory with a decision over Hesdy Gerges earlier this year. Although Verhoeven has fought the aforementioned Adegbuyi multiple times already, the Romanian has long been the No. 2 heavyweight in the world and has a claim to a fight with Verhoeven. The last man to defeat Verhoeven was Andrey Gerasimchuk. However, the Belarusian has yet to compete in 2018, which might eliminate him from the running.

The featherweight title-unification bout between Robin van Roosmalen and Petchpanomrung Kiatmookao could be another close, controversial outing. Will the interim titleholder be able to sway the judges in the Netherlands?

In the pair’s first bout, the dynamic of the fight featured a high-guard, forward-pressure Dutch stylist against an extremely skilled southpaw Muay Thai fighter with a nasty left kick. The numbers proved this clash of styles to be true, because van Roosmalen was able to land far more boxing combinations than his opponent. However, Petchpanomrung was able to throw his left kick over 100 times, which led to him scoring to the legs, body, arms, shoulders and head.

The first fight was so controversial due to the GLORY judging, which in Europe is largely conducted by the ISKA. The question of how much does a kick to the arms or shoulders score, or if it even scores at all, was apparent in the judges’ assessment of the fight. According to one judge, van Roosmalen won the bout 50-44, which is absolutely absurd because Petchpanomrung was able to land a very high volume of kicks and knees. Petchpanomrung was deducted a point for clinching in the third round, however.

Van Roosmalen was able to sway the judges in his favor as a result of his forward pressure. Expect him to approach this fight in a similar manner the second time around. The Dutch champion was able to push forward throughout the fight, but couldn’t land with any consistency. In the later rounds, van Roosmalen continued to chase down his elusive foe despite the waning effectiveness of his strikes. Petchpanomrung was able to lure the champ into his step knees and left middle kick. The Muay Thai specialist was able to circle off the ropes or enter the clinch to re-establish the distance. Those traits and abilities of the Thai challenger will always make fights like this difficult for GLORY’s only two-division champion.

Van Roosmalen will have another home-field advantage heading into the bout, as the Dutch kickboxing representative against the Muay Thai fighter in Amsterdam. Petchpanomrung has continued to showcase his incredible left kick in his bouts since their first meeting. Heading into the rematch, he is going to have to transform his approach to reflect what went wrong in the first fight. He wasn’t overwhelmed or out of the fight at any moment, but he was far too content to fight off van Roosmalen with his back to the ropes. This approach helped him score with counter step knees and pushed the champion into his left kick, but Petchpanomrung was never able to take advantage of the damage he dished out to the right arm of van Roosmalen.

It’s very likely that once again van Roosmalen will wade through the clinch, kicks and knees en route to a decision victory. However, if Petchpanomrung can slightly change his game to include more leg attacks, counter strikes with his hands, and a consistent use of his teep kick to create and manage distance, then there just might be a new champion crowned on Saturday night.

Which bout is the sleeper fight on the card?

In terms of entertainment value, there are some obvious fights and fighters on the undercard that immediately pop out. The Super Fight Series headliner between former champ Murthel Groenhart and Morocco’s Mohammed Jaraya is a surefire barn-burner. The battle of former lightweight challengers Chris Baya and Tyjani Beztati, as well as the heavyweight showdown between Jamal Ben Saddik and D’Angelo Marshall, will be important to determine divisional rankings. However, the fight likely getting slept on the most due its placement on the card is the featherweight showdown between Shoot Boxing S-Cup champ Zakaria Zouggary and Russia’s Aleksei Ulianov.

Both fighters are known commodities amongst kickboxing fans, and Zouggary has a chance to put himself right back into title contention with another victory. Zouggary won three of his four fights since signing with the promotion in 2017, but he might have been on the losing end of one of the best knockouts of the year against interim champ Petchpanomrung Kiatmookao. Zouggary has steadily built up his GLORY record with victories over former top-10 featherweight Massaro Glunder, dangerous veteran Yetkin Ozkul and, most recently, rising British prospect Bailey Sugden.

This fight could have plenty of breaks in action due to Ulianov’s Muay Thai base. The Russian is an experienced fighter who will use his size to fight either on the outside or to overwhelm his opponent with knees in the clinch. The former Tatneft Cup champion fell short in close bouts against the aforementioned Petchpanomrung and Giga Chikadze earlier in his GLORY career. What could potentially make this the sleeper bout of the evening is Zouggary’s exciting, pressure-forward style of fighting. The Moroccan is sure to bring the fight to Ulianov, which means the fans could be in store for a hotly contested battle.