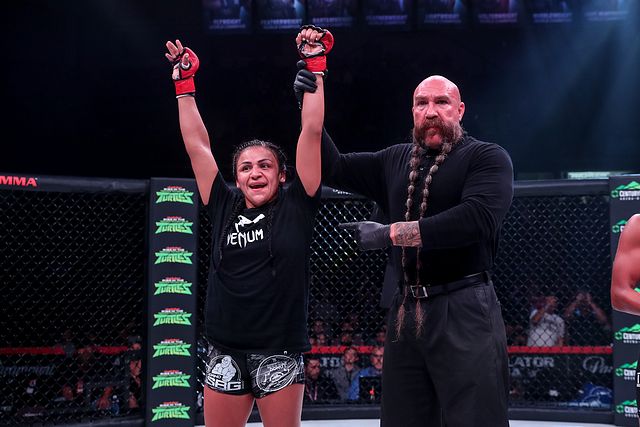 Bellator 220’s Veta Arteaga: The Path to a Title

As some politicians are starting to discuss making public college education free and wiping out some student debt, the value behind college education comes into question. How many people go to college to start down a specific career path, before deciding that their destiny lies down a completely different road?

Bellator title contender Veta Arteaga is one of these people. She started college several years ago and eventually got a degree in early education. However, she has also trained as a mixed martial artist for a good chunk of her life. She was working for the Head Start program when life threw her a lemon.

“A month later is when I got a phone call to sign a contract with Bellator. I joined Bellator a few years ago, and I’m lucky to say that I am doing this full-time. I do have a degree in my back pocket in early education, but I’m enjoying the process and enjoying the journey of fighting. I know this isn’t going to be forever. I would like it to be forever, but I know the human body is not going to let me do it forever.”

Arteaga made more than lemonade. She fell right into her dream job. So, how does a fairly laid-back, relaxed person find so much pleasure in a seemingly violent sport?

“Because I love the challenge,” Arteaga said. “It’s not only a physical challenge, but a mental challenge. You have to out-strategize your opponent. You have to be present. You have to be focused. It comes with so much more than just being a fighter. If I wanted to just fight, I would go into the streets to fight. It’s a different type of preparation, and I love challenging myself. Most of my growth as a fighter, and as a human, has been thanks to my career.”

In February 2016, Arteaga made her pro debut. Only three months later, she made her first Bellator appearance. She is now 5-2 as a professional, and after going her first six pro fights with five decisions and one doctor’s stoppage, she finally pulled off a finish over Denise Kielholtz at Bellator 205 in September.

“I didn’t want to go to decision, just because of the fact that it was in my hometown,” Arteaga explained. “I didn’t want to see a controversy. I had told myself, from here on out, no more decisions. Let’s go for a finish. I know that, and I try my best not to get in that position. I dug deep in that fight. The first round was very questionable, as far as, we were both standing and both exchanging. In the second round, I told myself that we’ve got to finish her. We need to figure something out. We’ve got to knock her out or we’ve got to submit her. I took advantage of every opportunity I had, and I think that’s what worked in my favor.”

Late in the second frame, Arteaga pulled off a standing guillotine choke to score a stoppage with only 36 seconds left in the round. After a few months, she was ready to continue the climb up the Bellator flyweight ladder. In January, she found out that she will move up all the rungs, right to the top, for a title challenge, which comes on Saturday night in San Jose, Calif., at Bellator 220.

“I was at home, just hanging out doing my daily routine and cleaning,” Arteaga said. “My manager called me and asked me if I wanted to get back in camp, and right away, I was like, yeah, let’s do it.”

Arteaga’s manager asked if she wanted to know who would be across the cage. It hadn’t even occurred to Arteaga, but her initial excitement was followed by the realization that she should probably know who it would be. The answer was Ilima-Lei Macfarlane, Bellator’s reigning women’s flyweight champion.

“This is the fight that I want, so I’m excited to go out there and perform on April 27,” said Arteaga.

Macfarlane first won the vacant tile over Emily Ducote in November 2017. She has already defended it against Alejandra Lara and Valérie Létourneau. The champ has won her last four fights by submission, but that plays right into Arteaga’s wheelhouse.

“I like that it’s well matched, as far as we are both [Brazilian Jiu-Jitsu] brown belts,” Arteaga said. “I like that the promotion has given me this opportunity. I’m grateful for this fight. I know that a lot of fighters want to receive that phone call and be in the position that I’m in. I’m grateful and excited. I prepare myself for everything. It could be a stand-up fight. You never know. I love to stand, but I don’t mind taking it to the ground. I like showing people my jiu-jitsu, because I’m known for liking to stand.”

With both ladies proficient in jiu-jitsu, this match-up is an interesting one. Arteaga trains out of Combat Fitness/SBG Idaho in her hometown of Boise, and the gym is full of high-level grapplers. One of the trainers is her brother, Freddy, who is a former high school wrestler and BJJ black belt, so the talent not only runs deep in the gym, but in her family as well. Occasionally, she will also make trips to gyms like Xtreme Couture or Team Alpha Male to work out with some of her friends, including Emily Whitmire and Cynthia Calvillo.

On Saturday night, at an event that streams live on DAZN, Arteaga will get her first major title challenge in the co-main event of Bellator 220. She’s definitely prepared to take the next step in her career as she attempts to secure the Bellator flyweight title.

“I’m unpredictable,” said Arteaga. “You’re definitely going to see all my skills, and I’m going in there for a finish. Cardio-wise, if it has to go to decision, I’m more than prepared. You will definitely see my hand raised and the belt around my waist on April 27.”