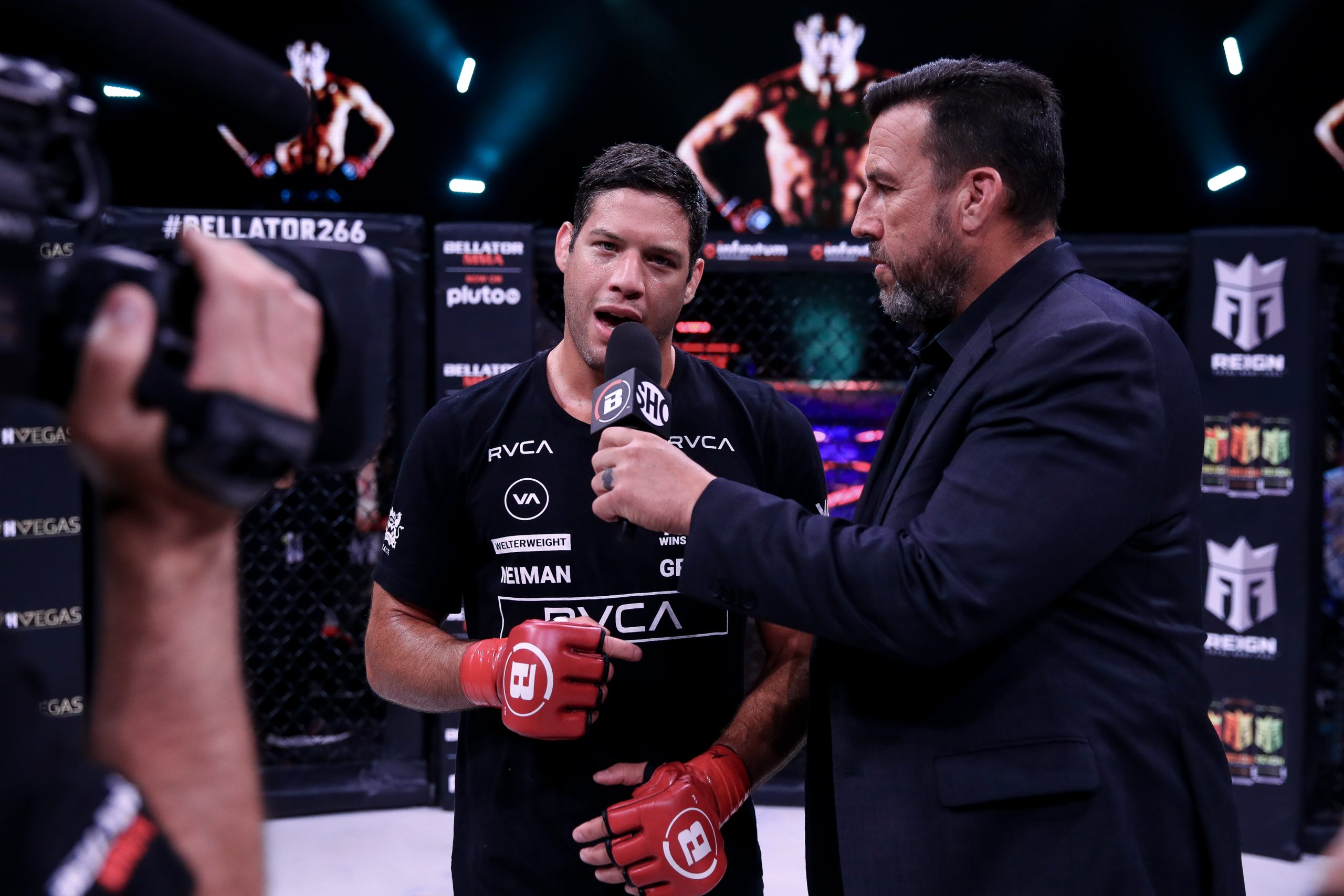 Bellator looks to bounce back from a lackluster main event last time out with 13 fights. Bellator 284 goes down on Friday, Aug. 12, inside the Sanford Pentagon in Sioux Falls, South Dakota.

The main event will be a welterweight bout between Neiman Gracie, grandson of Robson, and Goiti Yamauchi, one of the newest additions to the division. Gracie is looking to bounce back from his loss against Logan Storley, and Yamauchi is trying to prove he’s a future title contender at 170 pounds.

In the co-main event, it’s time for Steve Mowry to prove he’s a rising superstar in the heavyweight division. The six-foot-eight-inch beast had dominated subpar competition, but he now finds himself against former interim champion Valentin Moldavsky, who lost his last fight to Ryan Bader.

The Bellator 284 preliminary card airs live and free on Bellator’s YouTube page starting at 6 p.m. ET, with the main card following on Showtime starting at 9 p.m. ET. Check out the full preview and predictions below.

Neiman Gracie has hit a rough stretch as of late, losing three of his last five bouts; does he start to get back on track by defeating Goiti Yamauchi?

After a grappling-heavy main event at Bellator 283, Gracie vs. Yamauchi presents a potential chess match of submissions. With that said, two elite grapplers tend to cancel each other out, leading to a fight mainly consisting of striking.

If the fight stays standing, Yamauchi should have the striking advantage, depending on how his power translates to welterweight. Gracie has shown massive improvements in striking, but Yamauchi’s speed could cause trouble.

Meanwhile, the advantage likely shifts if they start grappling. Yamauchi is a submission specialist, but rolling with the creativity of a proven Gracie is risky. Yamauchi looked impressive in his welterweight debut, but Gracie should be able to bounce back in this main event. Gracie by second-round submission.

Valentin Moldavsky had a six fight winning streak snapped in his bid to claim the undisputed heavyweight title; how does he fare against Steve Mowry?

Moldavsky vs. Mowry likely plays out one of two ways. Moldavsky started his Bellator journey 6-0 with five decisions before losing to Bader. Meanwhile, Mowry has faced lesser competition than the Russian but has a promotional record of 6-0, all finishes.

Mowry is taking a huge step up in competition which could expose his weaknesses or reveal his championship potential. Seven first-round finishes are intriguing on paper but could potentially show a weak gas tank if the fight goes to the third round.

On the contrary, Moldavsky’s strength is limiting mistakes and outscoring his opponent round by round. With that said, weathering the storm of Mowry is no easy task for Moldavsky. Despite the experience disadvantage, Mowry has the potential to score a first-round finish.

Ilima-Lei McFarlane is on a two fight losing skid after being upset by Justine Kish the last time she fought; can she stop it from becoming three consecutive losses by besting Bruna Ellen?

Let’s keep this one simple. Bruna Ellen needs to keep this fight standing. At 26 years old, Ellen has established herself as an exciting striker in the women’s flyweight division. Meanwhile, Ilima-Lei MacFarlane has shown that she has the potential to submit anyone in the division, especially by armbar.
MacFarlane lost her last two fights, but against former champion Juliana Velasquez and then UFC veteran Justine Kish. Although Ellen has reliable striking, MacFarlane’s overall experience should lead to several takedowns and solid control team. Give me ‘The Ilimanator’ by decision.

The sleeper match-up of the week is a no-brainer. Vanderford vs. Jeffrey is a crucial matchup for both fighters. Vanderford needs to prove the result against Mousasi was simply due to a lack of experience.
On the other side, Jeffrey has been a highly-touted prospect for over a year but did not look too impressive in his last two wins. This could be his breakthrough moment against Vanderford, who has evolved nicely.

Vanderford always brings the pressure, so it’s time to see how Jeffrey reacts. We could see Vanderford bounce back with a monster KO or Jeffrey show why he could be a dark horse in the middleweight division.