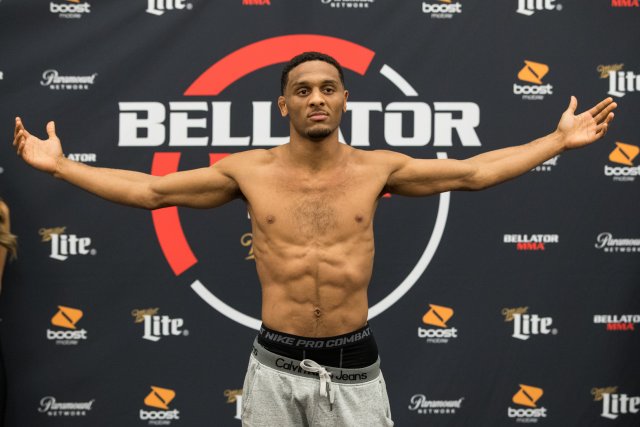 It’s common for a guy in his early twenties to want to be just like everyone else. Twentysomethings are all about going out with friends, hitting parties and imbibing in the young life. However, not everybody emerges from the same mold.

When A.J. McKee Jr. was brought into this world, his father, Antonio McKee, was 25 years old. When A.J. was only four, his father made his pro debut as an MMA fighter. In the 15-year career of the senior McKee, he amassed an impressive 29-6-2 mark. Then, Antonio retired as a competitor and passed the torch to his son. The younger McKee grew up as the son of a successful pro fighter.

“It was crazy, man,” McKee Jr. told Combat Press. “Growing up, my dad has always kind of prepared me, putting me in choke holds, holding me, testing me, and I’m like, ‘Get off of me. I’m freaking out. I’m irritated. I don’t want to wake up like that.’ But it taught me a lot. It taught me a lot of control. There have been a lot of cases in my career where there were situations I shouldn’t have won, but it’s that fighter in me that gets out and grinds [that] was able to pull through certain situations.”

McKee made his pro debut under the Bellator banner less than six months after his dad’s final professional appearance. Three years later, he sits at 11-0 with four knockouts, three submissions and four decisions. His father did a pretty damned good job of raising a well-rounded mixed martial artist.

“I’m staying focused, and the team behind me, they always prepare me, even when I don’t want to prepare,” the 23-year-old said. “I’m battling a lot of myself. I’m growing up, you know? Being 21, 22, you want to be that normal kid and enjoy the life of being out in California. One part is going out with your friends [and] being in Hollywood, and I’m just making those sacrifices, you know? Being where I’m at now — physically, mentally, spiritually — I’m able and growing, and things are lining up. I’ve got a great team from Aaron Pico to ‘Baby Slice’ [Kevin Ferguson Jr.], Joey Davis, Walel Watson. These are all great dudes, and we are helping each other out on the daily.”

The California native has a good thing going with his team. Not only are there high-level coaches and training partners that keep him pushing forward, but there are intangibles that he feels really set his team apart.

“We’re not just friends,” McKee explained. “We’re not just teammates. We’re like brothers in there. If I walk in the gym and I’m having a bad day, everyone sees that. They’re like, ‘What’s going on, A.J.? You need a hug?’ If I need a hug, they’re going to stop practice and give A.J. a hug and say, ‘We’re going to be there for him.’ I feel that’s the difference in our gym and our success. It’s practice. You’re not just practicing your craft, but everyday life — being available for each other and being available to others. Our gym is very different. We’re a different breed in there. We’re all young fighters, and we’re all up-and-coming. The proof is in the pudding, man.”

The stats speak for themselves. McKee has remained undefeated, as have some of his teammates. McKee is not fighting scrubs either. His last fight came against Justin Lawrence, who is a young veteran, a former regional champ and a Bellator mainstay. Their fight was a three-round war, but sometimes the win doesn’t sum up the whole story.

“I don’t feel I was hungry and eager to go in there and have that killer instinct,” McKee admitted. “In the third round, I was hitting him, and I was sitting there thinking, like, ‘Man, I’m getting tired of hitting this dude.’ That’s like a racecar driver getting tired of pushing the gas pedal. That’s unheard of. This is what you do. You need to be able to go in there and demolish someone for three [rounds], regardless if he’s taking every single punch. That’s what he signed that dotted line for.”

McKee’s next outing was lined up against former champ Pat Curran for Bellator 205, which takes place on Friday, Sept. 21. However, Curran had to pull out due to injury and was replaced by John “Macapá” Teixeira.

“If Pat says he’s hurt, he’s hurt,” McKee said. “Pat’s a gamer. He’s always coming to fight, you know? He’s there to fight. Pat’s a great fighter, and he’s looked great against some of the greatest guys in the division. I was looking forward to fighting him. However, to me, to have someone pulling out is nothing new. You see guys pulling out all the time.

“Every time I was supposed to fight a big name, they pulled out. Henry Corrales got hurt and had to pull out the week before the fight. Emmanuel Sanchez — he got hurt, pulled out the week of the fight and then signed a contract the week after my fight. I mean, these guys can run, but they’re going to have to step up to the plate. If they want their opportunity, they’re going to have to face me, because once that belt touches my waist, it’s not going anywhere.”

Macapá makes for a tough replacement opponent. Lawrence lost to him in the past, and the Brazilian’s most recent loss came to Curran. Macapá is a 26-fight veteran who is only 31 years old. He has his fair share of finishes, too.

“Much respect to him — thanks for signing the contract — but I got a job to do and a statement to make, just like I do every single fight,” McKee said. “Every fight’s a different fight, and every fighter is different. I won’t put anything past John. I look forward to getting in there and doing what I do best, and that’s putting on a show and kicking his ass.”

Macapá has also made some jaded comments toward McKee in previous interviews. The Brazilian even made the suggestion that the promotion has padded McKee’s record. All of this comes to a head on Friday night when the two headline Bellator 205 in Boise, Idaho.

McKee doesn’t want to be just any twentysomething. He’s out to prove that he’s a top fighter. There’s no padding here, only the real deal.