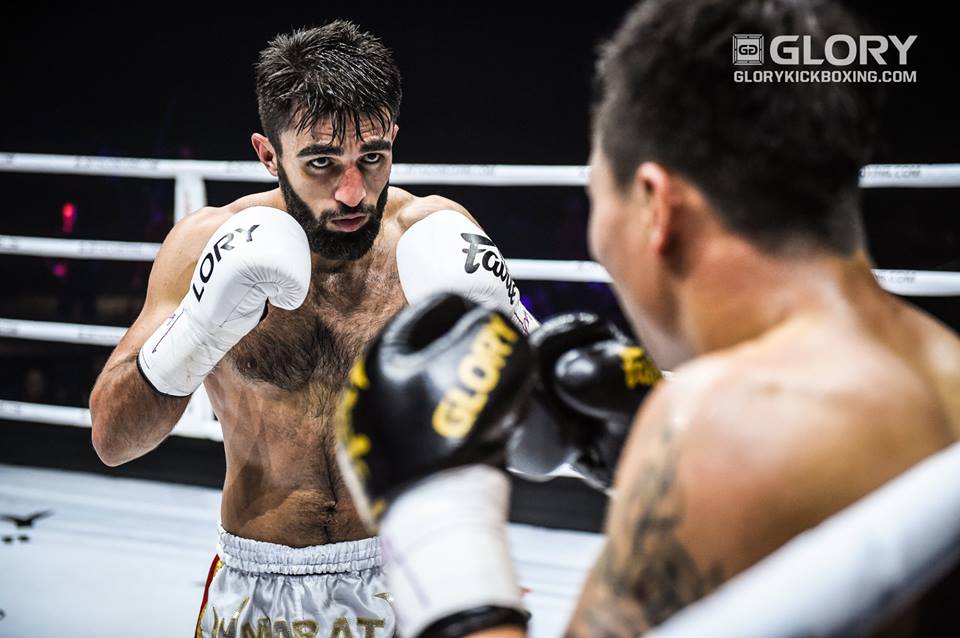 Dropped from the rankings: Andrey Gerasimchuk (4)

Top-ranked heavyweight Rico Verhoeven took out yet another top contender with a decision victory over No. 3-ranked Mladen Brestovac at GLORY 54. Verhoeven continued his dominant reign over the heavyweight division with his 10th straight victory and 16th win in his past 17 fights. Verhoeven keeps his stranglehold on the No. 1 ranking, a position he’s held since the inception of the Combat Press Kickboxing rankings in September 2014, as the only fighter to remain at the top of his division for the duration of the ranking’s history. Roman Krylia moves up one spot following his second-round knockout over Daniel Skvor to win the WAKO heavyweight title at Monte-Carlo Fighting Trophy in Monaco. Previously ranked heavyweight Andrey Gerasimchuk hasn’t fought within the 18-month cutoff, so the Belorussian has dropped out of the rankings. Enfusion heavyweight champion Luis Tavares moves into 10th place with a decision victory over the “Persian Lion” Kamran Aminzade at Enfusion 69.

GLORY welterweight champion Harut Grigorian made the first defense of his title when he stopped the upward momentum of the surging blue-chip prospect Alim Nabiyev at GLORY 54 in Birmingham, England. Grigorian outworked Nabiyev over the course of five championship rounds to keep his second place position in the rankings. Yohan Lidon remained active outside of GLORY with a title-winning performance against fellow Frenchman Karim Benmansour at the A-1 World Grand Prix in Algeria.

Marat Grigorian keeps his second spot in the ranking safter a unanimous decision victory over China’s Liu Xu at GLORY 54. Following his seventh straight victory, Grigorian gets a fourth chance to crack the puzzle that is the top pound-for-pound kickboxer in the world, Sitthichai Sitsongpeenong, for the GLORY lightweight world title at GLORY 57 in Shenzhen, China. Superbon Banchamek returned to the win column with a decision victory over Dzianis Zuev at Kunlun Fight 75 following a devastating first-round knockout at the hands of Grigorian earlier this year in the finals of the 2017 Kunlun Fight 70-kilogram tournament. No. 7-ranked Endy Semeleer continued to build upon his tremendous breakout year in 2017 with a stoppage victory over Paul Jansen for his third victory in 2018. The bottom of the top-10 was shaken up when Tayfun Ozcan finally broke into the rankings with a third-round stoppage win over Mohamed Khamal at Enfusion Live 69. Ozcan’s victory, combined with Mezouari’s inactivity, pushed Mezouari into a tie for 10th with Buakaw Banchamek.

The featherweight division was relatively quiet in June following a busy month of May that featured plenty of movement. The lone featherweight in action was No. 3-ranked Masaaki Noiri, who knocked out his overmatched opponent Vincent Foschiani in the second round at K-1 World GP 2018: Featherweight Championship Tournament.

The bantamweight division was the busiest weight class in June with plenty of action from top to bottom. At the top of the rankings, Koya Urabe knocked out GLORY veteran Arthur Sorsor with a highlight-reel head kick in a non-title bout at the K-1 World GP 2018: Featherweight Championship Tournament. Krush 63-kilogram champ Gonnapar Weerasakreck potentially earned a shot at Urabe’s K-1 lightweight title with a second-round knockout of exciting prospect Rukiya Anpo at the same event. No. 7-ranked Lin Qiangbang quickly rebounded following a tough defeat in the finals of the 2018 Kunlun Fight 61.5-kilogram tournament with a huge win over former IBF boxing world champion Amnat Ruenroeng at Kunlun Fight 75. Undefeated Japanese prodigy Tenshin Nasukawa moves up to the ninth position following a ‘Fight of the Year’ contender against highly ranked Lumpinee stadium competitor Rodtang Jitmuangnon at RISE 125. Yuta Murakoshi captures the 10th spot in the rankings and the K-1 featherweight world title following victories over Elias Mahmoudi, Jorge Varela, and Haruma Saikyo. Murakoshi pushed Saikyo out of the rankings with a first-round knockout victory in the finals of the K-1 World GP 2018: Featherweight Championship Tournament.

Two of the sport’s top pound-for-pound kickboxers were in action in June. No. 2-ranked Grigorian continued his lengthy winning streak with a decision victory at GLORY 54. Grigorian will have a chance to capture the top spot in the rankings at GLORY 57 this August with a victory over the top pound-for-pound kickboxer in the world, Sitthichai Sitsongpeenong. The world’s top heavyweight Rico Verhoeven kept his place in the rankings with another big victory at GLORY 54.

Iman Barlow moved up the women’s pound-for-pound rankings with her third straight victory and 13th win in her past 14 figths. The Enfusion women’s 54-kilogram titleholder bested Spain’s Lara Fernandez at Enfusion 68 in Newcastle, England. No. 9-ranked fighter Antonina Shevchenko furthered her pursuit of a mixed martial arts career with a dominant second-round stoppage against Jaymee Nievara on the third episode of the second season of the Dana White’s Tuesday Night Contender Series. Shevchenko remains in the rankings despite being awarded a multi-fight UFC contract by UFC president Dana White.