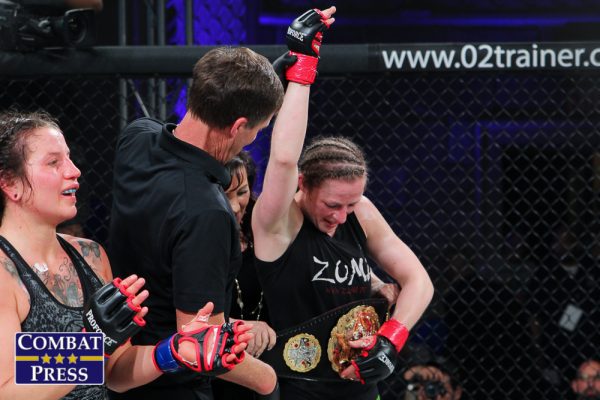 Invicta Fighting Championships served up a strong set of fights on Friday night at the company’s 29th event. Sarah Kaufman found the perfect formula to take the victory over Katharina Lehner in the main event. Kaufman and Lehner were fairly even when they stood toe-to-toe and threw punches, but Kaufman’s wrestling, top control and submission savvy were far too much for Lehner to handle. Kaufman’s performance should earn her another tenure inside the UFC.

Kaufman and fellow Invicta FC 29 fighter Liz Tracy, whose relentless pressure carried her to victory over Cheri Muraski, could both teach Allison Schmidt a thing or two about completing takedowns. Schmidt was repeatedly stuffed by her featherweight opponent Macy Chiasson through one of the night’s earliest affairs. Chiasson didn’t exactly look like a dominant force at 145 pounds, but the up-and-comer is undefeated through two pro outings now.

Pannie Kianzad finally snapped her skid with a victory over Bianca Daimoni in the co-headliner of the Invicta show, and her post-fight interview turned out to be a tearjerker.

Another sad moment at Invicta FC 29 came in the highly anticipated promotional debut of Julia Avila. Avila, an undefeated prospect who already holds victories over current UFC women’s flyweight champ Nicco Montaño and UFC fighter Marion Reneau, suffered a compound fracture of her finger less than a minute into her fight against Marciea Allen. There’s a lot of potential in Avila, and it was unfortunate that we didn’t get to witness what she’s capable of doing in the Invicta cage.

Nine seconds. One left hook. That’s all it took for Kyoji Horiguchi to knock out Ian McCall at Rizin 10. The Japanese fighter was already considered a top flyweight, but now he’s making a pretty solid case to enter the upper echelon of the bantamweight division as well.

Ian Heinisch overcame Gabriel Checco to claim Legacy Fighting Alliance’s interim middleweight title at LFA 39. Heinisch secured the win with a first-round knockout of Checco. The 29-year-old’s only loss came to Markus Perez, who is now a member of the UFC roster. It might not be long before he joins Perez on the big stage.

Maycee Barber moved to 4-0 with her LFA 39 win over Audrey Perkins. The 19-year-old Barber has impressed so far through four LFA outings. She could be a future strawweight star for the UFC, but she’ll need to find more consistency on the scales.

There were two major Russian MMA events this weekend that featured big-time prospects.

At Russian Cagefighting Championship 2, Ivan Shtyrkov finally fell short in a fight. He still didn’t lose, but the undefeated heavyweight fighter did go the distance in a draw against Gerônimo Dos Santos. Elsewhere on the card, Aleksander Emelianenko knocked out UFC vet Gabriel Gonzaga.

Rizin 10 also featured one of the world’s most exciting young kickboxing prospects competing for only the second time this year. Japanese phenom Tenshin Nasukawa earned his 25th victory in his professional kickboxing and Muay Thai career with a second-round TKO stoppage against World Series of Fighting Global flyweight champion Yusaku Nakamura.

Nasukawa knocked Nakamura down with a rolling thunder kick in the last few seconds of the first round.

He continued his dominance into the second frame, where he knocked down Nakamura three more times to get the victory.

Nasukawa moved his combined professional combat-sports record to an impressive 30-0. The 19-year-old prodigy has made a big enough splash in the Japanese kickboxing world that the landscape of kickboxing outside of the biggest kickboxing promotion in the country, the K-1 World GP, is changing as a result.

Rizin head Nobuyuki Sakakibara announced the promotion will be holding a kickboxing-rules grand prix to begin in September and end in December on the New Year’s Eve card. Though no fighters or weight class have been announced, Sakakibara alluded to the fact that Nasukawa, former K-1 champion Taiga and even MMA standout Kyoji Horiguchi will likely be in the tournament field.

Enfusion Live 66 featured the third round of the 85-kilogram round-robin tournament and a 70-kilogram championship bout between former GLORY world champion Davit Kiria and Spain’s own Jonay Risco.

Risco defended his belt following five rounds of back-and-forth action with his top-10 lightweight opponent. Risco is riding two huge wins over top-10 opponents in the past two months, which could potentially put the Spaniard in the top 10 at the end of May. Risco’s roller-coaster ride over the past few years features big victories over Buakaw, Tayfun Ozcan, Dzianis Zuev and now Kiria. However, Risco has only won four of his past 11 fights. In the current kickboxing landscape, many of the world’s best compete against each other, which usually separates the elite from the rest. In this case, however, Risco has traded wins and losses with some of the best in the division.

In 85-kilogram Enfusion league action, Ulrik Bokeme and Lorenzo Javier Jorge pushed themselves into a tie for first place with three victories at the halfway point of the tournament. Jorge continued his ascent up the middleweight rankings with a first-round stoppage of top-10 middleweight Ibrahim El Boustati. Despite losing to Hicham El Gaoui outside of the tournament, Bokeme defeated Morocco’s Khalid El Bakouri to move his point total to 10. Former top-10 middleweight Filip Verlinden moved himself into a tie for second with a decision victory over Boubaker El Bakouri.

The French kickboxing and Muay Thai scene was active this past weekend with three shows featuring top-end talent — Muay Thai Fighting Championship 7 from Lyon, Warriors Night in Nanterre, and Capital Fights 3 from Paris.

The biggest French event of the weekend was Capital Fights 3, which took place on Saturday, May 5, at the Halle Carpentier in Paris. In the main event, Diogo Calado scored a big victory by topping former top-10 welterweight Karim Ghajji via decision. The win halted Calado’s two-fight losing streak and moves the Portuguese fighter closer to the top 10. Ghajji couldn’t turn his fortune around after losing his Bellator Kickboxing welterweight title to Raymond Daniels in 2017. Is it possible that Ghajji, 37, has started to slip from the best in the division? A loss to Calado is not a sign that Ghajji is done by any means, though.

Speaking of fighters who have lost to Daniels recently, France’s Djibril Ehouo erased his failed title challenge in Bellator Kickboxing with a solid victory over former top-10 middleweight Cyril Benzaquen, who he beat once before earlier in his career.

There were many notable French fighters competing on the card, most of whom had their hands raised in victory on home soil. GLORY veteran Jimmy Vienot scored a first-round knockout against Kunlun Fight vet Noppakao Sor Siriluck, Gaëtan Dambo continued his winning ways with a decision over Jenrob Pumpanmuang, Mohamed Galaoui bested Belgium’s Stefan Tarmoaca, and Alexy Wallace stopped Celestin Mendes.

Brena Cardozo became the first women’s 56-kilogram titleholder with a split-decision verdict over Elaine Lopes in the finals of the Challenger GP. In the semifinals, Cardozo defeated Daiana Torquato by decision, and Elaine Lopes went to war with Aline Pereira, the sister of GLORY middleweight champion Alex Pereira.

Gennady Golovkin, also known simply as “GGG,” put on a show on Cinco de Mayo. The Kazakh fighter and Combat Press No. 3 ranked pound-for-pound boxer, knocked out Vanes Martirosyan in the second round with a vicious combination that caused Vanes to drop to a knee and eventually to the mat.

It’s been a hectic last few months for Golovkin, whose contest with Canelo Alvarez evaporated after Alvarez tested positive for banned substances. A second fight with Alvarez is still not out of the question, and GGG made it known he still wants the fight. The likely date could be September 16, which is Mexican Independence Day. Alvarez’s suspension will be up by then. If the Alvarez fight doesn’t come to fruition, the division has a number of contenders, such as Daniel Jacobs and Jermall Charlo, that would be great fighters who could test GGG.

The co-headliner of HBO’s broadcast included the U.S. debut of Cecilia Braekhus. She and Kali Reis made history by taking part in the first women’s boxing bout to be televised by HBO. The fight did not disappoint, as both fighters traded punches from bell to bell. Reis was a formidable opponent, knocking down Braekhus for the first time in her career and coming on strong in the later rounds. However, it wasn’t enough. Braekhus won a unanimous decision with scorecards of 97-92, 96-93 and 96-93. Hopefully this fight did enough to finally wake up the executives at not just HBO, but Showtime and ESPN, and finally convince them to get more women’s bouts on main cards and televised shows. The ladies are just as talented as their male counterparts and deserve the opportunities.

Across the pond, David Haye finally got his chance to avenge his knockout loss to Tony Bellew. However, he failed in this mission. Haye walked away the loser after being finished once again. The loss could mean the end of the line for Haye, who has flirted with retirement before. For Bellew, it’s on to bigger and better things in the heavyweight division. There’s a plethora of options for him at the weight class, and another win could put him in contention for a spot in the top 10.

Also on the card at the O2 area in London, Paul Butler lost a unanimous decision to Emmanuel Rodriguez, who became the IBF bantamweight champion with the victory. It was an easy contest for Rodriguez, who was never in any danger during the fight. The scorecards reflect this, with two of the judges giving him 120-106 scorecards.