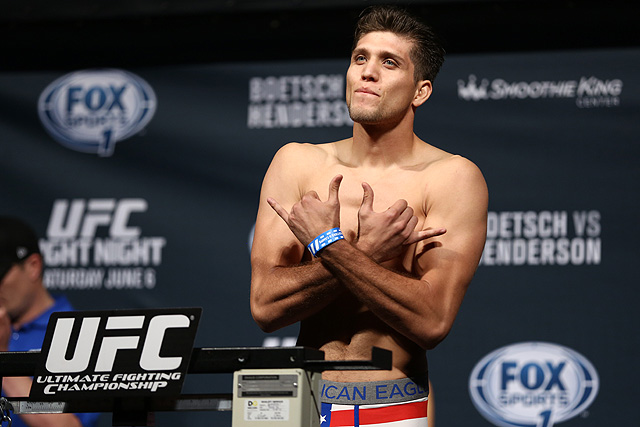 When Brian Ortega became the first man ever to finish Frankie Edgar, at least half of the UFC fan base were in shock, this writer included. I had my hands locked on top of my head with my jaw dropped, and it took me at least 10 minutes to let what happened sink in.

Ortega is sensational. He is simply phenomenal. Even those words do not do enough to describe the 27-year-old Californian’s quick rise to the top. Since joining the UFC in 2014, Ortega is yet to suffer a loss. He has not even faced a slight setback, other than injuries that kept him out of action for over a year from 2016 to 2017.

In the sport of MMA, especially in a promotion as big as the UFC, prospects are constantly attempting to climb the ladder. Some completely fail to live up to the hype — I’m not going to name any out of respect — and some rise fully to or even above their potential, such as Conor McGregor, Jon Jones and Ronda Rousey. However, those who go on to become mega-stars are so rare in the sport. They may only come by once a decade. We can only count a handful of fighters who rose above their already high expectations.

Most prospects in the sport start extremely well on their rise to the top. As they enter the top 10 of their division, they sometimes suffer setbacks. Recently, we saw some very impressive prospects fall to top-ranked fighters. Yair Rodriguez did so, coincidentally at the hands of the aforementioned Edgar. Doo Ho Choi was cruising along until he encountered first Cub Swanson and then Jeremy Stephens. Kelvin Gastelum was making a strong run in the middleweight division before meeting Chris Weidman. There is nothing wrong with losing to top-ranked fighters if you’re a young, up-and-coming sensation. Most of the time, losses to top-caliber fighters only help improve the future contenders.

However, Ortega is not a normal prospect. Not even close. There is something about what “T-City” brings to the table every fight that separates him from any other fighter currently on the rise. There are plenty of things to break down, and amongst them is his well-roundedness. The versatility Ortega brings to the Octagon has never been seen before in the promotion. Of course, fighters like Jon Jones, Anderson Silva and Georges St-Pierre are as versatile as gets, but Ortega can do anything and everything.

Up until the Edgar fight, those going up against Ortega all had the same mindset. As long as they avoided the ground, they thought they’d be fine. Oh boy, how the tables have turned in just one night. Not only did Ortega finish one of the toughest fighters to finish in the history of the sport, but he did it on his feet, and he did it with one uppercut. While Edgar should be and will always be as respected as anyone in the sport for even accepting the fight rather than waiting for his well-deserved title shot against reigning UFC featherweight champion Max Holloway, it only makes Ortega’s win that much bigger and more impressive.

Well-roundedness isn’t Ortega’s only weapon. He also has grit and instinct second to none. He has the most consecutive third-round finishes (four) in UFC history. Ortega was losing majority of those fights, too. He has never been known as a fast starter or a cardio monster that can push the pace for five rounds. What he has constantly been able to do is pull off necessary finishes when he needed them. That does not happen often.

Usually when fighters are down on the scorecards, it makes it much tougher for them to finish their opponent, since then the fight is likely to be more of a defensive one for the fighter who is ahead. Openings become harder to find. For Ortega to constantly pull off those finishes, especially as impressively as he has been doing so with both his jiu-jitsu and striking, is an extremely rare quality. Recently, Ortega even seemed to have gotten rid of his issue of slow starts, as his past couple and his most difficult fights all ended in the earlier rounds.

Ortega has also shown that a fighter can be exciting and attractive to fans without talking. Unlike McGregor or Chael Sonnen, Ortega has always been nothing but respectful to his opponents, whether before or after the fight. He is likeable, easy to get behind, and motivational. All of his post-fight speeches have delivered some sort of positive message. His now for-certain title fight against Holloway will create as much hype and anticipation as any featherweight title bout in UFC history, with the exception of the clash between José Aldo and McGregor.

While we know Holloway will not avoid Ortega, it will easily be Holloway’s most difficult challenge to date, due to both Ortega’s momentum and stylistic match-up against the Hawaiian champion. It is also the first time in a while that two extremely young fighters have clashed for a title, which makes it much more exciting.

If you can’t wait for this fight to be finalized, you are not alone. There will be much more to say as the fight gets closer, but there is something different about this title fight than any other ones so far in 2018 or even in all of 2017.