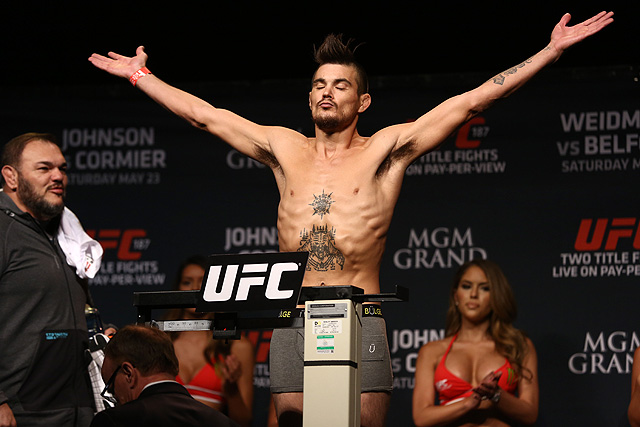 The 40th edition from Japan’s Heat organization is full of championship fights and strong prospects. While Americans likely know Bellator veteran Hisaki Kato as the star of this group, it’s really the flyweight title fight that deserves the most attention. Heat’s flyweight titleholder, Takeshi Kasugai, puts his strap on the line against Korean veteran Nam Jin Jo.

The 28-year-old Kasugai made his pro debut in 2009 and went just 4-2-1 over his first seven outings. He got on a roll in 2011 that led to a 10-fight winning streak, which included eight straight stoppages. He finally stumbled again in 2014 while competing in a Vale Tudo Japan tournament. He held his own against Hiromasa Ogikubo, a finalist in the UFC’s The Ultimate Fighter 24 tournament to determine a title challenger for Demetrious “Mighty Mouse” Johnson. Kasugai lost his fight with Ogikubo, but it was very close, ending in a majority decision. Kasugai bounced back against UFC veteran Motonobu Tezuka before suffering a unanimous decision loss to the rather mediocre Min Jong Song. The Shimura Dojo export recovered from his second defeat in three fights and has gone on to claim victory in six of his last seven outings. His recent streak includes an additional win over the aforementioned Tezuka, as well as victories over established veterans Kiyotaka Shimizu, Yasutaka Koga, Kyu Sung Kim (twice) and Shohei Masumizu. The other fight in this stretch would have been a loss for Ksaugai against Rogério Bontorin, but the Brazilian missed weight and the bout was declared a no-contest despite Bontorin’s submission of Kasugai. The win over Tezuka came in a bantamweight championship affair under the Heat banner, and the victory over Kim came in a fight for the Heat flyweight crown. Kasugai is most notable for his finishing ability. He has 12 submission victories, one technical knockout and one knockout win.

Jo, 26, has been fighting professionally since 2008. The “Drunken Monkey” has had a roller-coaster ride throughout his career. He won his pro debut, lost his second fight, won two, alternated losses and wins for his next six bouts before suffering back-to-back losses and then won four straight before fighting to a draw and losing another contest. The grappler’s most notable wins came against former top flyweight Shinichi “BJ” Kojima and former Shooto strawweight champ Mikihito Yamagami. He has suffered losses to Kevin Belingon, Kentaro Watanabe and, most recently, the aforementioned Song, whom he had previously beaten. Jo has never been stopped in a fight, but he has lost seven decisions.

Jo is certainly a beatable opponent, but he’s not easily stopped. His grappling base will come in handy against a submission artist of Kasugai’s caliber. Although Pancrase’s oddball rules allowed Kasugai to avoid a loss against Bontorin, the submission finish had to take some wind out of the Japanese star’s sails.

Kasugai has his work cut out for him, but Jo’s lack of big victories suggests he’s not quite good enough to get past the champ. Kasugai will work hard for submissions, but Jo could force this to the scorecards. That’s where Kasugai will pick up the victory.

A glance at Road FC 40’s headliner, an openweight battle between Siala “Mighty Mo” Siliga and a 44-year-old fighter who last competed in MMA in 2012, might be uninspiring outside of Asia’s freakshow-fight circuit, but the real gem of this event lies in tournament action. Road FC has brought together 16 lightweight competitors for a tournament that kicks off on July 15. The field features such notables as Ronys Torres, Kota Shimoishi, Yui Chul Nam, Gleristone Santos and Mansour Barnaoui. However, the most compelling fight in the round of 16 is undoubtedly the showdown between Shamil Zavurov and Leo Kuntz.

Zavurov is an International Master of Sports in sambo and a Master of Sports in freestyle wrestling, and he’s a three-time world champion in Combat Sambo. Needless to say, Zavurov should be able to take this fight to the mat whenever he so chooses. He holds five wins by submission and 11 by way of some form of knockout, but Zavurov’s resume shows a move away from grappling and toward the striking aspect of his game. His last submission win came in October 2010, and he’s relied more heavily on the TKO finish in the time since. He lost his M-1 strap to Yasubey Enomoto in 2011, and he has been unable to beat Enomoto in their two subsequent meetings. While he has bounced around from league to league over the years, Zavurov has spent a majority of his time recently with the Akhmat Fight Show organization. After debuting in AFS with a 2015 win over UFC veteran Hermes Franca, Zavurov suffered the last of his three career losses to Enomoto. He rebounded with two wins en route to the promotion’s lightweight grand prix finals, where he fell to Khusein Khaliev. Zavurov has journeyed to three other leagues following the loss, and he’s come away with a victory at each stop.

The 33-year-old Kuntz debuted as a pro in 2008 and spent several years on the American regional circuit before landing a spot in The Ultimate Fighter 16 competition. He didn’t fare well, however. Kuntz lost his only TUF fight to Sam Alvey. “The Lion” returned to the regional scene and tacked on three more victories, including a first-round submission of grizzled veteran Ted Worthington. The run earned Kuntz a second chance at the UFC. He made his Octagon debut at UFC 187, where he lost to Islam Makhachev. His second UFC outing also resulted in defeat when he dropped a split decision to Tae Hyun Bang. The UFC parted ways with Kuntz, who landed in Road FC and picked up a win over Young Gi Hong in early 2017. The American Top Team fighter has seven knockout wins and six submission finishes.

Zavurov has primarily competed at welterweight throughout his career. That might give him a slight size advantage in terms of bulk, but he’ll give up two inches in height to the 5-foot-10 Kuntz. Any reach edge might be a moot point against someone with Zavurov’s takedown skills. Kuntz has displayed some holes in his ground game that have resulted in two submission defeats. If Zavurov can bring his focus back to grappling, he could handle Kuntz with relative ease.

The flyweight division might be UFC President Dana White’s least favorite weight class at the moment, but there are plenty of prospects out there to assure that the division has a bright future. Take Jungle Fight 91’s flyweight pairing of Denis Araujo and Leandro Soares.

Araujo has fought as a pro since 2012 and streaked out of the gates with 10 victories before suffering his first and only loss. “Três Dedos” trains out of BH Rhinos and has eight stoppage wins. He has five knockouts and three submissions. Araujo’s most notable victory came in an XFC International tournament when he defeated José Vagno Soares, who was 11-1 coming into the fight. His last loss came against Deiveson Figueiredo, who went on to join the UFC roster after one additional victory. Araujo bounced back from the Figueiredo loss by notching a win over Fabiano Moreira.

Soares has yet to taste defeat in his young pro career, but he hasn’t faced nearly the level of competition Araujo has seen. “Foguinho” turned pro in 2014 and rattled off eight wins in the subsequent three years. His most experienced opponents have been Dener dos Santos, who was 12-8 when he met Soares, and Alexis Magallanes, who was 8-5 at the time of their fight. Soares did submit the formerly undefeated Paulo Henrique Araujo in his most recent outing, but that rival’s undefeated mark consisted of just two wins. Overall, the Sombra Team export has six submissions and one TKO finish.

Araujo, despite a fairly even amount of knockout and submission wins, looks more comfortable on the feet. The BH Rhinos fighter uses feints and a busy in-and-out style of movement while working stand-up.

Soares, too, has a solid striking, though he can be flat-footed at times. Where he really excels is in the clinch. He can overwhelm opponents against the cage en route to a finish. However, his really specialty comes on the mat, where he can be quick to take an opponent’s back for the choke.

Soares will want to close distance and work in the clinch while also seeking takedowns. Araujo’s seen some solid competition in the past and often comes out ahead, but Soares might be scrappy enough to put Araujo in danger and score the submission finish.