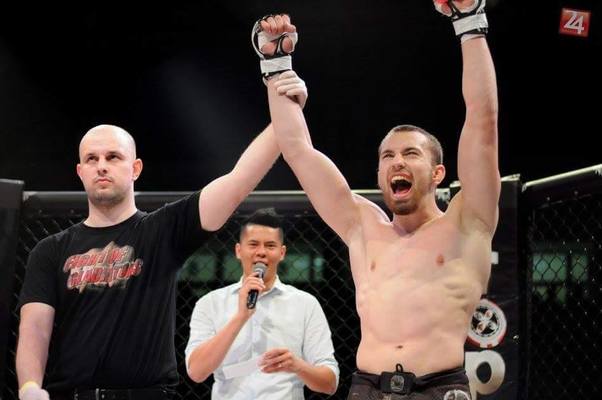 Out of Obscurity: Eagles FC, Oktagon Prime 3 and Jungle Fight 102

Moldova’s Eagles Fighting Championship promotion has been going strong since its 2016 debut. The organization hosts a few shows per year, and 2020 kicks off with an event dubbed “Next Level.” The bill is topped by a clash for the vacant lightweight title. The two contenders are Valeriu Mircea and Martun Mezhlumyan.

Mircea has the vast experience edge in this contest. The 31-fight veteran entered the pro ranks in 2014 and went 7-1 in the Italian regional circuit before appearing at M-1 Challenge 60 in 2015. “The Solitary Wolf” stumbled in the Russian organization and suffered a first-round finish at the hands of fellow prospect Raul Tutarauli. Mircea bounced back with six straight wins against low-level competition before again taking a step up at Venator Fighting Championship 3. Again, he faced a setback, this time via a guillotine choke courtesy of UFC veteran Cody McKenzie. After another five wins, he appeared at Bellator 168, where he was submitted in the first round by Goiti Yamauchi. Mircea finally picked up a significant win in his next outing when he squeaked out a majority decision over Djamil Chan at Bellator 176. His success was short-lived, however, as he dropped his very next fight and then fought to a draw against Gregor Weibel. The 26-year-old has righted the ship once more to the tune of six wins, including a knockout of UFC vet Anton Kuivanen. Overall, Mircea has 12 submission finishes and nine knockouts.

Armenia’s Mezhlumyan only has nine fights under his belt since a 2016 debut, but he has only suffered one loss thus far. The 26-year-old won his first two outings, but he suffered a submission loss to Movsar Baimaskhanov in late 2017. He has since rebounded with six wins. His most accomplished foe in this recent streak was Illya Gladkiy, who entered their December contest with a 3-1 mark. Mezhlumyan, who has five knockout wins and two submission finishes, has never fought someone with more than five pro fights.

Of course, Mezhlumyan will now fight someone with 30-plus bouts to their name and numerous appearances on bigger stages. Mircea’s losses to fighters like McKenzie and Yamauchi suggest that he’s probably reached his ceiling in the MMA world, but his recent streak is evidence enough that he can even beat some UFC castoffs. Mircea has proven to be a solid finisher regardless of where the fight takes him.

Mezhlumyan has to be considered a huge underdog here. He’s preyed on very inexperienced and unheralded competition. Mircea should be able to find plenty of holes in Mezhlumyan’s game and exploit them. The veteran should walk away with a submission victory after overwhelming his opponent.

The third offering in the Oktagon Prime series has a number of intriguing match-ups in its lineup. The lightweight title will be on the line in the main event. Prospect Vojto Barborik looks for his 12th pro win further down the card. However, it’s the featherweight scrap between L’udovit Klein and Łukasz Sajewski that offers perhaps the evening’s best pairing.

Klein has compiled a strong 15-2 mark since his 2014 pro debut. The 24-year-old won nine of his first 10 bouts. He made his Cage Warriors debut in late 2017 and fell victim to a rear-naked choke in the first round of his fight with Aiden Lee. The Slovakian fighter has been perfect since then. He is now riding a six-fight winning streak that includes finishes of Willian Lima and João Paulo Rodrigues over his last two appearances. Klein has scored eight submissions and six knockouts.

The 29-year-old Sajewski made his pro debut in 2008, but he’s had stretches where he’s fought sparingly. The “Wookie” got off to a great start in which he won his first 13 fights. He was the first fighter to hand Marcin Held a pro loss. After such a strong run, the Polish fighter landed in the UFC. It was all downhill from there. He lost his Octagon debut to Nick Hein via decision. His sophomore effort with the company resulted in a first-round submission loss to Gilbert Burns. The final straw was his knockout loss to Marc Diakiese, which sent Sajewski back to the regional circuit. The change in scenery didn’t help the Mighty Bulls Gdynia product, who dropped his first post-UFC fight to The Ultimate Fighter 13 alum Nordin Asrih. In December 2018, Sajewski picked up his first victory in over four years when he submitted Yuriy Ryaboy. One year later, he faltered yet again when he met European journeyman Damien Lapilus.

Sajewski has had a rough half decade. He’s now lost five of his last six fights. It’s an unfortunate turnaround for a fighter who entered the UFC with a perfect mark. It won’t get any easier when the Polish fighter collides with Klein this weekend. Klein has put together a balanced record of finishes via knockout and submission, whereas Sajewski is most comfortable in the grappling realm. The lack of momentum and, seemingly, confidence won’t help Sajewski either.

Klein has been feeding on veteran talent lately, and this could be his chance to garner some attention from the big leagues. However, he’s not a sure thing. Klein’s losses to a 2-1 Igor Tarytsa and the aforementioned Lee are reason for concern. The Slovakian striker will need to be at his best here against a fighter who is still capable of turning his career around. However, Sajewski has been stopped via strikes twice before, and Klein seems to have grown fond of the head kick in recent outings. This one could end with a bang for Klein.

The 102nd edition of Jungle Fight delivers a middleweight championship contest, but we’re more interested in a featherweight clash further down the lineup. Rodrigo Magalhães has only lost one fight through 12 pro outings. He’s out to add another victory to his record when he tangles with Antonio Roberto.

Magalhães debuted in 2011 and won his first seven professional contests. In his first trip to the M-1 Challenge organization in 2015, he fought to a majority draw with Mikhail Korobkov. He returned to his native Brazil and reeled off three more victories to bring him to a 10-0-1 mark entering 2018. In his lone bout of that year, he finally tasted defeat when the scorecards didn’t go in his favor against Apti Bimarzaev. This will be his first fight in over a year. The 33-year-old has collected eight of his wins via submission.

Team Nogueira’s Roberto checks in at the same age as his opponent, but he has suffered more bumps in his career since debuting in 2010. “Tony Fox” lost three of his first four bouts before finally finding his groove. In 2014, he kicked off what would eventually become a four-fight winning streak. The run came to an end in 2017, when Roberto dropped a decision to Thomas Diagne. Roberto has recovered nicely. He has won his last six fights while picking up gold under the Venator FC banner and co-headlining the Jungle Fight 99 card.

Magalhães has the more impressive record, but that doesn’t make him the favorite here. He’s fought mostly low-level competition, and his biggest step up resulted in a loss. Roberto appears to have a more well-rounded game that also comes with some significant achievements on the regional scene. Honestly, though, both men need to challenge themselves against more difficult opponents.

Roberto’s recent success against veteran competition, combined with the one recent stumble from Magalhães, is enough to make him the slight favorite here. The Team Nogueira disciple should have the ability to hang with Magalhães on the mat and light him up on the feet. It’ll be a war, but Roberto should emerge with the judges’ nod.