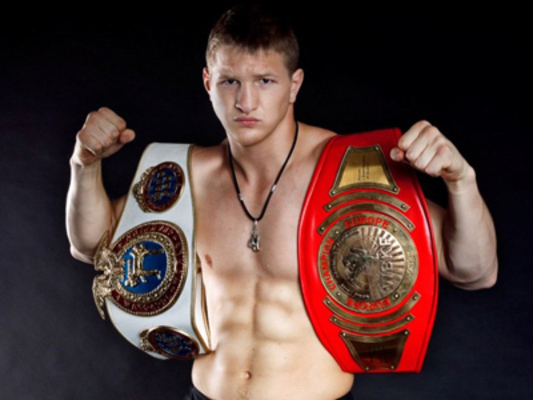 The Fight Nights Global name may not be present in the title of the latest event from Donetsk MMA Federation, but FNG is a co-promoter for this show. One of FNG’s biggest stars, Vladimir Mineev, is set to headline the festivities opposite fellow prospect Diego Dias in a middleweight showdown.

Mineev is a highly decorated kickboxer. The 29-year-old made his pro MMA debut in 2014, but he’s been active in the pro kickboxing circuit since 2009. The striker hasn’t settled into just one weight class, instead opting to bounce around between weights ranging from 176 pounds on the small end of the scale on up to light heavyweight at his heaviest. Along the way, Mineev has finished eight opponents with his fists and three by way of submission. His kickboxing resume includes 11 knockout stoppages. Mineev suffered his only loss in a 2016 majority decision to UFC castoff Maiquel Falcão, but he subsequently destroyed the Brazilian with strikes in the first round of their rematch just five months later. He has since added a striking stoppage of Bellator veteran Andreas Michailidis, a first-round submission of journeyman opponent Pavel Masalski, and a knockout of Milos Kostic. He has also fought to a draw with Magomed Ismailov.

The 27-year-old Dias kicked off his professional MMA career in 2013. He went just 2-1 with one no-contest through his first four fights, but then he found his groove. “DD” reeled off five straight wins before encountering another setback in a knockout loss to Edson Marques. The Nordeste Jiu-Jitsu fighter recovered to the tune of three more victories in 2019. He has a balanced resume that includes three knockout victories and four submissions.

Mineev scored first-round finishes in his first five MMA fights, but his best opponents in this stretch were Xavier Foupa-Pokam, a struggling UFC veteran, and Yasubey Enomoto, who pushed Mineev to the first decision of his pro MMA career. He stumbled against Falcão, but quickly avenged the loss and added another notable victory before padding his record further against a sub-.500 fighter. He struggled again when he faced Ismailov, but he did deliver a quality showing against Kostic. Mineev needs to demonstrate consistency against tougher opposition if he wants to continue to advance in his pro career. His kickboxing background and ability to submit opponents are enough to suggest that he’s quite capable of a successful run in this sport.

Dias has an impressive record at first glance, but the deep dive suggests even more padding than we’ve seen from Mineev. The Brazilian’s first two knockout wins came against rookies who never fought again. His first loss came by way of submission against Anderson de Oliveira, who is now just 1-3 as a pro. His big winning streak consists of victories over opponents who now hold marks of 1-1, 0-3, 3-1, 0-7 and 7-11. His more recent streak features fighters who stand at 1-2, 6-3 and 5-1. It’s an improvement, at least. The one time Dias actually challenged himself against an undefeated prospect, he was knocked out by the aforementioned Marques.

All signs point to victory for Mineev in a cleverly disguised record-padder of a bout. This is no knock on Mineev’s skills, but the middleweight really needs to find better opponents on a regular basis. In this contest, he shouldn’t even break a sweat before finding the knockout finish.

If you’re a fan of the flyweights, you might want to pay attention to the 17th edition of Gorilla Fighting Championship. The organization’s flyweight title is on the line between prospects Tagir Ulanbekov and Denis Araujo.

Ulanbekov debuted in 2013 and submitted his first three adversaries. He finally went the distance when he stepped up to meet more seasoned competition in the form of Shyngys Kairanov, but he still emerged victorious. His next three fights also came against high-level opponents from the FNG roster, and Ulanbekov scored a submission via strikes, a unanimous decision, and a submission across those three outings. He finally stumbled in his final FNG appearance against Zhalgas Zhumagulov, who edged Ulanbekov for a majority decision. The Dagestani fighter rebounded with a unanimous verdict over Aleksandr Podlesniy in May. The flyweight upstart is a Master of Sport in combat sambo and holds a world championship in that discipline.

Araujo has fought as a pro since 2012 and streaked out of the gates with 10 victories before suffering his first loss. “Três Dedos” added another three wins before dropping a fight to UFC and FNG veteran Ali Bagautinov. The BH Rhinos export responded with a win on the Brazilian regional circuit to close out 2018. He has eight stoppage wins — five knockouts and three submissions. Araujo’s most notable victories came in his run up to the Jungle Fight flyweight strap. He topped the formerly undefeated Leandro Soares in a flyweight showdown at Jungle Fight 91 and then decisioned Bruno Menezes for the vacant belt. His first defeat came against Deiveson Figueiredo, who went on to join the UFC roster after one additional victory.

Araujo, despite a fairly even amount of knockout and submission wins, looks more comfortable on the feet. The BH Rhinos fighter uses feints and a busy in-and-out style of movement while working stand-up. It’s brought him plenty of success, except when he runs into world-class talent like Figueiredo or Bagautinov. In essence, he’s going to play the gatekeeper for Ulanbekov. If the combat-sambo specialist gets past Araujo, we might be looking at a future UFC or Bellator talent. If Ulanbekov falters, then he’s probably at his ceiling right now.

Ulanbekov’s sambo background should give him the necessary skills to get the job done, but he has stumbled once as a pro and once as an amateur in his MMA career. He’s taken out some decent talent on the Russian regional scene, but Araujo will be a significant step up for him. Zhumagulov was tough, but Araujo could be far worse for Ulanbekov. The only factor working in Ulanbekov’s favor is the location of this contest. Araujo’s only ventured outside of Brazil once, and that was in the loss to Bagautinov.

If this fight took place in Brazil, we’d confidently give the nod to Araujo. However, given that Araujo will have to travel to Kazakhstan, it’s not so simple. Still, the former Jungle Fight champ did go the distance with Bagautinov and should push Ulanbekov to his limits. It should go the distance, but Araujo will come away with the victory.

The Legacy Fighting Alliance has had several years of success now, preceded by years of success for Legacy Fighting Championship and the Resurrection Fighting Alliance. However, the organization is at a critical crossroads right now. Its deal with AXS TV has come to an end — LFA 77 won’t have a broadcast home — and the promotion has been forced to cancel its upcoming trip to Colorado for LFA 78. The company will need to find a new broadcast partner if it wants to survive. For now, though, LFA 77 is still set to take place on Friday, and the championship headliner between heavyweights Daniel James and Brett Martin could still produce another addition to the UFC roster.

James normally tips the scales within a few pounds of the upper limit of the heavyweight division. The 37-year-old has already made two LFA appearances, and he scored knockouts in both of those outings. “The American Predator” can deliver vicious finishes via strikes on the feet or ground-and-pound on the mat, but he has struggled to maintain consistency. After a 3-1 run as an ammy, the Midwest Training Center product made his pro debut under the Bellator banner with a second-round stoppage of the formerly undefeated Erick Correa. His next fight didn’t go as well, as he dropped a decision to Leroy Johnson. James posted four straight wins against mediocre competition, but then lost to a sub-.500 foe. After a majority draw against John Hawk, James took a victory over Chris Beal. He lost to Daniel Gallemore, another fighter with an uninspiring career mark, before rattling off three finishes in a row.

The 25-year-old Martin lives up to his nickname as the “Big Dog.” He spent his amateur career and pro debut in the super heavyweight division. He went 7-1 through his ammy days and won that first pro fight. He continued to add victories at the heavyweight level en route to a 4-0 start to his pro run. After a decision loss to Leroy Johnson, Martin added another four victories to his resume, including a win in his LFA debut against Renan Ferreira. While Martin had a high finishing rate in his amateur days, he’s only managed to stop opponents in half of his pro wins.

Martin’s only win in the LFA came as a result of illegal punches thrown to the back of his head via Ferreira that led to a disqualification. The Triumph MMA fighter has faced better overall competition than James, but he has yet to truly prove himself under the LFA banner. James at least boasts wins in his two LFA appearances, and they came against decent prospects, including the formerly undefeated Calyn Hull.

This fight will go one of two ways. It will either be a slugfest or a grinding fight that makes it to the scorecards. James appears to be much more aggressive in chasing the finish, though. He’s been on a roll, too. Martin was starched in just seven seconds by Joe Konsdorf as an amateur, and he could be destined for a similar fate at the hands of James.