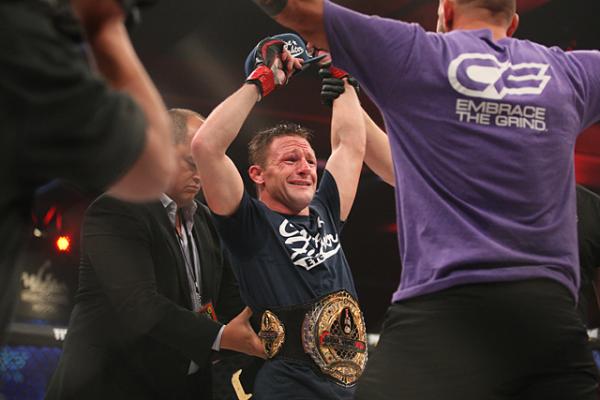 Bellator heads to Thackerville, Okla., and the Winstar World Casino and Resort for Bellator 135. This card isn’t as strong the promotion’s “British Invasion” lineup from Bellator 134, but it does house some familiar names that could make strides in Bellator’s divisions.

The main event is a title fight between newly crowned bantamweight champion and Mr. Bellator himself, Joe Warren, and grappling specialist Marcos Galvao, who makes his return to the cage after a year off. Warren is on a five-fight winning streak since his back-to-back knockout losses to Alexis Vila and Pat Curran. Galvao, on the other hand, is on a three-fight winning streak, with his last loss coming against Eduardo Dantas for the bantamweight title in February 2013.

Francis Carmont makes his first appearance in the cage since his UFC release. He’ll fight in the a featured bout against Guilherme Viana, who makes his Bellator debut as well. Carmont is a UFC veteran on a three-fight losing streak looking to take advantage of Bellator’s shallow light heavyweight division and earn himself a shot against champion Liam McGeary. Viana has made his bones on the regional Brazilian circuit and moves to the big stage in his first fight outside of Brazil.

Bantamweight kingpin Joe Warren makes his first title defense since beating Eduardo Dantas for the title at Bellator 128 in October. Marcos Galvao gets a second crack at the belt after suffering a loss to Dantas in his previous title bid.

Warren put on an entertaining fight with Dantas and showed some great grappling skills that ended up putting the two fighters in some unorthodox and weird positions. Warren is, of course, a wrestler at his core, but his striking has started to come along with age. At 38 years old, Warren is at the top of his game in a division typically run by the young guys.

Galvao isn’t a young man himself — he is 33 years old — but the Brazilian could provide some trouble for Warren. Warren is going to look to take this fight to the ground. It’s his strength, it’s how he fights and it’s how he wins. There is no other game plan he can employ. Despite his opponent’s strengths, Warren looks for the takedown.

The same can be said of Galvao’s strategy. He is notorious for closing the distance and getting the takedown. Galvao is a grappler, but without the submission finishes to show for it. Wrestlers don’t typically do well off their backs, and Galvao will look to capitalize on that fact against Warren.

Galvao can smother just about anybody, but I’m skeptical he can be effective against Warren. Warren is a great fighter and proved me wrong against Dantas. I’m not picking against him here with a guy whose only chance to win is by going against Warren’s strength in the grappling department. Warren takes this fight by decision or a late finish.

WEC veteran L.C. Davis fights for the third time in Bellator against Hideo Tokoro, a veteran who has fought primarily in his home country of Japan.

Davis is a strong and powerful wrestler. If you don’t believe that, check out his last fight, which came against Zeilton Rodrigues at Bellator 124. It was a lopsided fight in which Davis put on a wrestling clinic. It was a dominant decision victory for the 34-year-old, and it solidifies the idea of what we can expect in this fight. Davis is going to look to bring the fight to the ground. Much like Warren, that is where Davis wins and loses his fights. Tokoro is very experienced, but he doesn’t have the takedown defense to stop Davis.

Tokoro is fighting an uphill battle here. He is on a two-fight skid and stands at 2-3 in his last five fights. Tokoro hasn’t fought since last July, and that was a loss to Victor Henry where Tokoro was knocked out. The Japanese fighter is also 37 years old, only a year younger than Davis.

There is a lot pointing in favor of Davis in this fight. When Bellator brings over a fighter who has made his name in Japan, the fighter typically doesn’t do well and are fed to better opponents to move their opponent along in their respective divisions. It’s extremely rare, as a matter of fact, that the imported fighter wins.

Davis by decision in what will be yet another wrestling clinic.

UFC veteran Francis Carmont fights for the first time since his UFC release. He goes up against Guilherme Viana.

Viana has fought exclusively on the Brazilian regional circuit, where he has accumulated a 6-1 mark. He is riding a three-fight winning streak. Viana’s only loss came by split decision against Rodney Wallace just over two years ago. Viana last fought in July and will be making his stateside debut.

Viana doesn’t get an easy task against Carmont, who was known to smother his opponents inside the Octagon when he fought under the UFC banner. The 33-year-old is on a three-fight skid that led to his pink slip from the UFC. Before the losses, Carmont had notched six straight UFC victories, including wins against such notables as Chris Camozzi, Lorenz Larkin and Costas Philippou. Carmont will also see a different division when he makes his Bellator debut. He fought at middleweight for the UFC, but he is fighting at light heavyweight against Viana.

Carmont’s habit of smothering his opponents is a key factor in this contest. Once Carmont brings his opponent to the ground, he can contain and grind him out. Carmont is part of a trend on this card of fighters who will look to bring the fight to the mat and work to a grinding, non-fan-friendly decision.

Carmont has fought some great talent already — and won — so it’s reasonable to expect more of the same in his Bellator debut. Unless Viana can catch the Frenchman in a guillotine while defending the takedown or during a cage stall — or perhaps even snag a triangle or an armbar from his guard — he won’t stand much of a chance. Carmont has the UFC pedigree that Bellator seems to like when signing fighters, and Bellator will look to develop him as a name to watch as a potential challenge for champion Liam McGeary.

The lightweight clash between Ryan Couture and Dakota Cochrane might just be the closest fight on the main card.

Cochrane was a big guy on the regional circuit before attempting to join The Ultimate Fighter 15. I say “attempting” because Cochrane was defeated in the qualifying round by James Vick, who advanced as far as the semifinals. Cochrane is 3-2 in his last five fights with wins over Efrain Escudero and Anton Kuivanen. He lost to Alexander Sarnavskiy at Bellator 128 in October. The fight with Sarnavskiy also took place in Thackerville, in the same building that hosts Friday’s event. Cochrane’s fight with Sarnavskiy wasn’t the type of statement a fighter would like to make in his debut. Cochrane was thoroughly dominated by the Russian and ultimately forced to tap.

Couture, on the other hand, had a great promotional debut. He submitted Tommy Bagnasco at Bellator 124 with a rear-naked choke in the first round. Couture has a grappling background that is hard to deny. With a father like Randy Couture, it’s hard to escape that shadow, but Ryan has done well outside of his short stint with the UFC.

Couture’s last two losses have come to Al Iaquinta and Ross Pearson. Those aren’t exactly bottom-of-the-barrel talents. They’re some of the better 155-pound fighters on the UFC roster. Cochrane isn’t on their level. Don’t bet on a finish for Couture, but he can certainly take the decision.