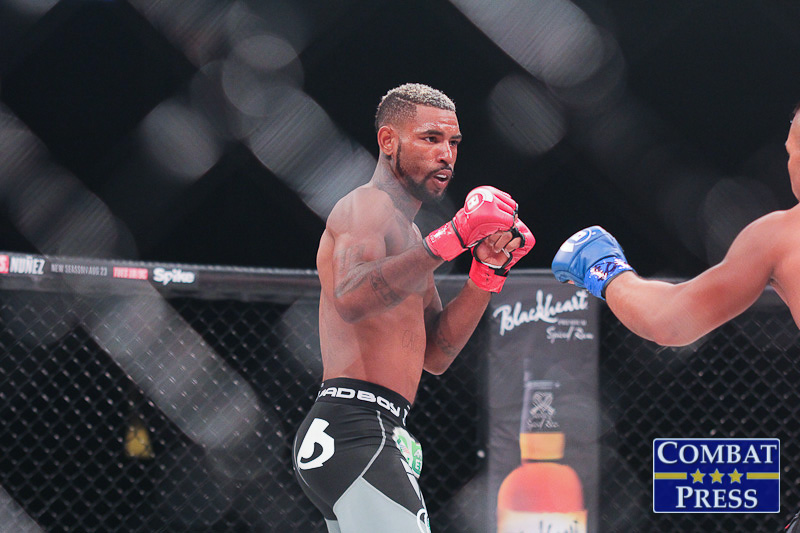 Bellator MMA heads back to Thackerville, Okla., and the WinStar World Casino for Bellator 195.

The main event on the card is a bantamweight title fight between current champion Darrion Caldwell and challenger Leandro Higo. Caldwell won the belt in his last fight when he defeated Eduardo Dantas by unanimous decision. Now, he seeks his first successful defense. Caldwell has been on absolute fire for Bellator, only stumbling once against Joe Taimanglo. He later avenged the loss when he beat Taimanglo by unanimous decision in their rematch.

Higo is no stranger to fighting for the Bellator bantamweight title. The Brazilian previously lost a bid against the aforementioned Dantas.

The co-headliner could very well decide who gets the next crack at the bantamweight title. The aforementioned Taimanglo takes on Bellator veteran Joe Warren, a former Bellator champion who has been on a rocky path for the past few years. Warren will look to gain a little consistency against Taimanglo. Meanwhile, Taimanglo hunts for a third crack at Caldwell.

The main card also heads up to the 145-pound featherweight division, where veteran William Joplin welcomes multiple-division King of the Cage champion Juan Archuleta to the organization. The women’s flyweight division will also see some action when Emily Ducote takes on Kristina Williams.

The Bellator 195 preliminary card takes place at 7 p.m. ET on Bellator.com. The main card will air live on the Paramount Network at 9 p.m. ET.

After initially stumbling against Joe Taimanglo, Darrion Caldwell avenged the loss and then topped Eduardo Dantas to capture the Bellator bantamweight title. He meets Leandro Higo, who just barely failed in his own title bid against Dantas. Does Caldwell hold onto the crown?

Yes, Caldwell should hold onto the crown. He has always been one of the top prospects in Bellator. The former collegiate wrestler has been nothing short of spectacular on his climb up the ladder from prospect to champion. Outside of the one slip against Taimanglo, Caldwell has torn through some of the best opposition Bellator could give him. Tested time and time again, Caldwell is the better pick in this fight.

Higo did barely fail against Dantas, but Dantas is an entirely different fighter. Caldwell has a strong wrestling background that makes him a smothering opponent on the ground. Higo does have a strong submission game, but Caldwell generally doesn’t give away much position to his opponent on the ground. Caldwell also has a growing game on the feet and has displayed improvement in his striking in every fight.

Higo hasn’t shown the ability to keep up with Caldwell. Caldwell’s wrestling is too good. Higo may be a threat with his submissions, but Caldwell should be able to avoid those like he has in past fights. The loss to Taimanglo via third-round submission should be enough of a teaching moment for the young fighter. Higo is one of the better fighters in the division, but Caldwell is a much different beast than Dantas. This will be a ride.

The co-headliner also features bantamweights. It’s a showdown between Joe Warren and Joe Taimanglo, both of whom have lost to Caldwell. Is this the No. 1 contender fight that Bellator should have made? If not, who should be battling for the next chance at the main-event winner?

I’m a little more iffy on Warren getting yet another title shot since he has been wildly inconsistent for the past few years. As noted, Warren already lost to Caldwell in their only meeting. However, Warren is a company man, and Bellator will most likely shoehorn him into any title fight if the company sees fit.

Taimanglo also has a loss to Caldwell, but he was also able to win one fight against the super prospect.

Ultimately, it’s up to Bellator if this truly is a No. 1 contender fight. The signs point to it, though. Caldwell and Taimanglo looked great in their two previous fights, which is something Bellator can easily promote. Both encounters were entertaining fights, and the series is split at one a piece. Which fighter got the fluke win? Who truly is the better fighter? Bellator isn’t a stranger to having a third fight between top veterans. It happens frequently in this promotion.

There is only one other option for the promotion if it’s looking for the next bantamweight title challenger: UFC veteran Michael McDonald. This option would depend on how the oft-injured McDonald recovers from hand surgery. McDonald, despite his infamous reputation for injuries, has been a bright prospect in the bantamweight division. He has always had a heap of potential, only to miss out on big fights. If he can recover, McDonald should ultimately be the next challenger. We’ll have to wait and see on that front, though.

Romero Cotton is an interesting prospect who comes over from collegiate wrestling, where he was a three-time national champion. Cotton got away with a split decision in his first professional fight and should improve in his sophomore appearance. He faces Justin Reese, who is also in the early portion of his professional career. Reeser’s lone win as a pro came by disqualification, and he is coming off a knockout loss.