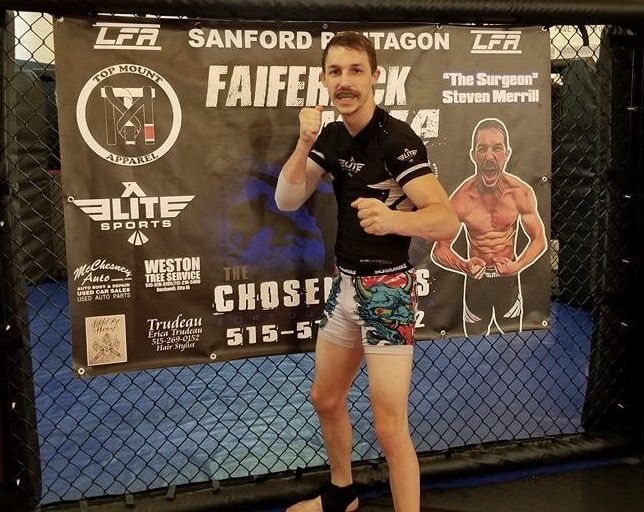 LFA 19’s Steven Merrill: ‘We Don’t Get Paid Overtime in There’

Merrill, who remains undefeated through four pro fights, was recently involved in a rear-end collision with a tractor trailer. His vehicle was deemed a total loss. He almost experienced a similar fate.

“I could have died,” Merrill told Combat Press.

The incident led to the cancellation of Merrill’s planned bout on July 28 for the regional Brutaal Genesis Iowa promotion. But as the old saying goes, when one door closes, another one opens. Merrill has since signed with the LFA and will make his debut at LFA 19 on Friday, Aug. 18.

It’s another step in Merrill’s journey to reach the pinnacle of MMA. The journey began all the way back in kindergarten when he began wrestling. Merrill continued to compete in the sport all the way through high school.

“We had a good little program when I was a kid, and we had a good program in high school,” Merrill said. “I was OK-ish. I was more of a decent wrestler in high school, when I won a conference title and qualified for the district finals. But I couldn’t compete because of my grades. I was funky with taking legs, and I was a topside rider.”

As with many young people, Merrill found himself involved in some scuffles and fights through his teenage years. He then channeled those experiences into a career in fighting. Merrill won his first bout on an unsanctioned fight card in 2009. It took him just 45 seconds to snag the victory.

He competed five more times through 2010 before taking a break to focus on his college career.
Merrill returned to fighting in 2014 as an amateur MMA fighter and won a title belt, which also led to the creation of his nickname: “The Surgeon.”

“I was asked what my nickname was, and I said I didn’t have one,” Merrill said. “I was told that I had to think of one, or they were going to give me a nickname. I dealt with two collapsed lungs when I was 14, and I had other procedures done and had other injuries. So I was always in and out of the hospital. I also heard people say I’m so technical and precise when I’m fighting, so I thought of the nickname ‘The Surgeon.’ The promoter said he loved that.”

Merrill turned pro in 2016 and has won his first four professional fights, all by submission. He attributes his success thus far partly to getting back in touch with his roots.

“I got back into wrestling and had some more fights,” he said. “I also started using contacts in my eyes, and last year I started to expand my time in the gym. My girlfriend and I decided that I was going to do this full-go, so now she works full-time while I train full-time.”

“He and his family are great human beings,” Merrill said. “He cares about you as a person first and a fighter second. It’s a lot like the relationship between T.J. Dillashaw and Duane Ludwig. He knows just how to push you to get you to do your best.”

However, Merrill isn’t content to just sit back and let his coach carry him to success.

“Everything can improve with me,” Merrill said. “My boxing may be my weakest link, but I have pretty dexterous legs, so my leg-kick skills are growing. But I need to learn to bring my fists back to my face, and learn not to move my head off the center of the line, and to get control of the center of the cage. It’s just a few little, tiny things. I also had a few chances at a rear-naked choke in my last fight, so it’s also about ironing out those indecisive tendencies.”

Merrill will get a chance to sort out those tendencies when he steps into the cage with fellow undefeated bantamweight Emeka Ifekandu, who’s perfect through three pro bouts, at LFA 19. This will be Merrill’s first nationally televised bout on AXS TV. The LFA is often seen as a stepping stone for many fighters to bigger organizations like the UFC or Bellator MMA, but Merrill isn’t getting too caught up in the moment.

“I understand the gravity of the situation and the fight I’m having, but one thing I’ve developed with Master Justin is that a fight is a fight is a fight,” Merrill said. “I’m just pretty excited about it and looking to get the finish in the first round. We don’t get paid overtime in there. I’m looking to finish him, whether I TKO him or submit him. I’m looking forward to going out and doing what I do in the gym and be free with it. I’m pumped. I expect to get a call from the big leagues after this, but [if] I don’t, then I’ll just take another fight with LFA and get paid again.”

Merrill is not content to just make it to the world’s biggest MMA promotion. He believes he would match up well with some of the elite of the UFC’s bantamweight division. This includes UFC bantamweight champion Cody Garbrandt, the aforementioned Dillashaw and another former titleholder, Dominick Cruz.

“I want to be the 135-pound champion,” Merrill said. “If your goal is just to make it to the UFC, then you’ve already lost on that goal. If you have small dreams, then you’ll just achieve small dreams. If you only take small risks, then you only get small rewards. I’m not settling for less. It’s not what I want. I want to be able to take care of my girlfriend and my family.”