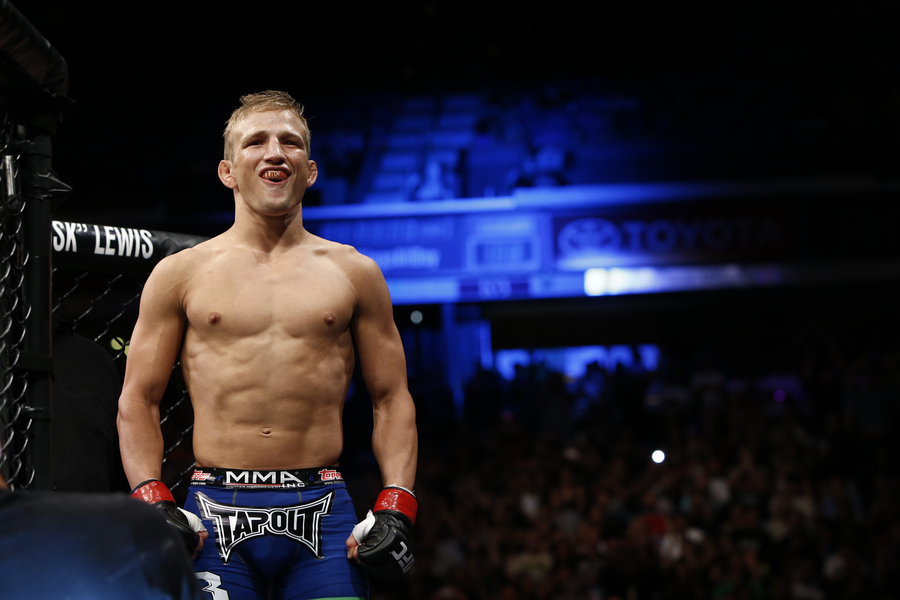 For a guy who hasn’t lost in almost a decade and is consistently regarded as one of the two or three best fighters in the world, Jose Aldo has a lot of people trying to fight him. From this weekend’s main-event star Conor McGregor to former title challenger Frankie Edgar to current lightweight champion Anthony Pettis, it seems like everyone has been making it clear they want a shot at the UFC featherweight champion. Recently, another big-time fighter was added to that list: bantamweight champion T.J. Dillashaw.

After defeating Aldo’s friend and training partner Renan Barao for the UFC’s 135-pound strap last year, Dillashaw went from bantamweight prospect with a ton of potential to UFC champion and one of the fastest rising stars in the sport, all in less than 24 hours. By defeating Barao, who entered their title fight regarded as one of the very best fighters in the world and riding a practically unheard-of 33-fight streak without a defeat, Dillashaw earned one of the biggest upset wins in modern MMA history, and his popularity skyrocketed as a result. Now, after taking out Barao in order to claim his throne, it appears that Dillashaw is looking at Aldo and a superfight in order to try to solidify his status as one of the top five fighters on the planet. Sadly, it’s not going to be that simple. In fact, the odds are that this fight won’t happen any time soon, if ever.

If the UFC could just throw Aldo and Dillashaw into the cage and let them go to war, there’s little doubt that the fan interest would be there to support the matchmaking. Unlike many superfights the UFC could potentially construct, Aldo vs. Dillashaw already have a lot of history even though they’ve never competed against each other. The (somewhat) friendly rivalry between Aldo’s Nova Uniao camp and Team Alpha Male, where Dillashaw trains, has been the best rivalry between camps the UFC has had to offer in a long time. From Aldo’s and Barao’s title defenses over Urijah Faber and/or Chad Mendes to Dillashaw’s more recent thrashing of Barao this past summer, these two camps have competed for supremacy in the lighter weight classes for a few years now, and a champion-vs-champion fight featuring both gyms would add a ton of fuel to one of the better camp rivalries in MMA history. However, despite all of the positives that could come with putting the Nova Uniao vs. Team Alpha Male rivalry on center stage, the harm that would be done by neglecting the featherweight and bantamweight divisions easily negates any gains that would come from the fight.

First of all, all of the fighters listed at the beginning of this article have a better claim to a shot at the featherweight champion than Dillashaw. McGregor has been winning fights and marketing himself so unbelievably well that the UFC would be insane not to give him an opportunity, as long as he defeats Dennis Siver this weekend. Even Dillashaw acknowledged as much when he made his initial call-out of the featherweight champ. Edgar took Aldo to maybe the closest decision of his career and has worked his way back into the mix after dominating a future UFC Hall of Famer in his last appearance. Even Pettis, who like Dillashaw resides in a completely different division than Aldo, has a better claim than the Team Alpha Male fighter. He has been booked to fight the featherweight champion in the past before injuries opened a different door and led to his lightweight title reign. Throw in Dillashaw’s Alpha Male teammate Mendes, who just gave Aldo the fight of his life a few months ago, and the list of contenders is a mile long.

The competition for Dillashaw isn’t quite as deep at the moment, but the bantamweight champion doesn’t exactly have a group of scrubs sitting behind him in the division either. While a rematch with Barao is seemingly next on the champ’s agenda, Dillashaw also has two very legit title contenders in Dominick Cruz, a former champion, and Raphael Assuncao, the last man to beat Dillashaw. Both contenders are nursing injuries right now, but they will be preparing for a potential title fight once they’ve healed up. Those three fighters, along with Dillashaw’s friend and mentor Urijah Faber, represent some very real challenges that Dillashaw must clear before he can be considered the undisputed king at 135 pounds.

Even though both fighters still have multiple challengers sitting in front of them, the main reason the UFC can’t afford to jump the gun and set up this fight is because Dillashaw is still far too early into his title reign to go around accepting superfights right now. Since winning the belt from Barao, Dillashaw has competed exactly one time, and that was against an opponent who accepted the fight on a roughly 24-hour notice and was making his UFC debut. Furthermore, even though he’s the champion, Dillashaw has only defeated two fighters in the UFC’s top 15 at bantamweight. There’s no denying he’s one of the best young fighters in the sport, and the win over Barao proved Dillashaw is a force to be reckoned with, but he still has a lot of work left to do before he’s half as dominant at 135 as Aldo has been at 145.

It’s not hard to understand why Dillashaw took a shot in the dark and called out Aldo, but he did it a little too early into his bantamweight title reign. He won’t be able to talk his way into a superfight right now. While Aldo is getting closer and closer to completely cleaning out his division, Dillashaw still has far too much to prove before the UFC can allow him to abandon his own weight class and go after Aldo. The odds are much better that we’ll see Aldo fight Pettis in a champion-vs-champion fight in the next year. It’s a hell of an idea and an even better fight, but the Aldo vs. Dillashaw dream fight is going to remain exactly that for the time being — a dream.