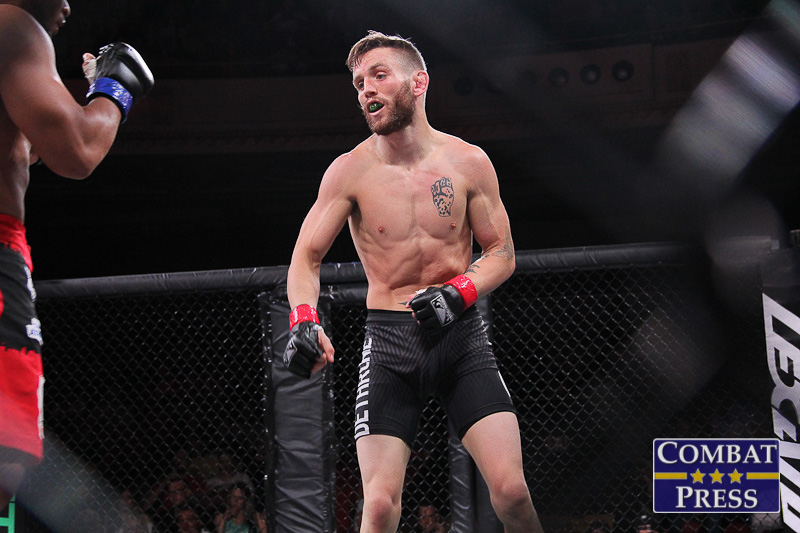 UFC on Fox 24’s Tim Elliott: The Enigma of the Normal Guy

An enigma, by definition, is a person who can be difficult to understand — someone who’s not what people expect and carries a certain amount of mystery.

In the fight game, most guys are easy to read and fall into a few categories. There are the lifelong athletes, the goofballs who are just dying to be in the spotlight, and the thugs who just want to fight somebody, whether they’re getting paid or not. There is some grey area in there from time to time, but most fighters will fall into one or more of these categories. However, occasionally there are the enigmas — the guys who are definitely outside of the norm.

Contrary to what some may think, being in the spotlight as a fighter is not always what it’s cracked up to be. While some fighters just drool at the opportunity to be in front of the camera or can’t stop dreaming about becoming a champion, some guys fight just to put on an exciting show for the fans and the rest is more of a nuisance than anything else.

Tim Elliott is a Kansas native. He was a state champion wrestler in high school. He wrestled in college, too, and eventually earned a Bachelor’s degree from the University of Central Oklahoma. In most respects, that’s not an unusual pedigree for a UFC fighter. He’s spent much of his professional career training with fellow vets James Krause and Zak Cummings at Glory MMA & Fitness in Lee’s Summit, Mo., which is just outside of the Kansas City metropolitan area. At 30 years of age, he’s 13-7-1 as a pro, held and defended the Titan FC flyweight title, has only been stopped once in the last eight years, and recently won season 24 of The Ultimate Fighter reality show, which launched him back into the UFC promotion. On the surface, there’s not much of a unique story here. However, Elliott is more than just a Wikipedia page, and he’s not afraid to speak his mind.

“My time on [The Ultimate Fighter] was not fun,” Elliott told Combat Press. “I had a difficult time making weight. I really didn’t have a great experience as far as that goes. Other than that, I met some really cool guys, and the producers and people who worked on the show were amazing. The coaches were awesome. The fights were all good. The only issue for me was the weight cut. I wish the show had been at 135 pounds. It was tough to make weight four times in four weeks. Other than that, I took a ton away from it, and it was a good opportunity.”

Whether it’s fear of upsetting the promotion or trying to save face, it can be difficult to get a real answer from a former contestant about their time on the show. However, Elliott is a veteran in his second run in the UFC, and he’s just a straight-up, honest guy. He’s not in it for the stardom or the paycheck. Elliott wants to put on great fights for the fans, and he couldn’t pass up the opportunity to represent his Titan FC title and get back into the Octagon.

As the TUF winner, Elliott earned a chance to challenge UFC flyweight champ Demetrious “Mighty Mouse” Johnson for his title. In December, the two men met in the TUF 24 Finale, and the champ won by unanimous decision. Again, it was a great learning experience, but Elliott didn’t feel the fight was very exciting.

Probably the biggest takeaway from Elliott’s time on TUF was his chance to shake up his training a bit. His next fight is this Saturday night at the Sprint Center in his recent hometown of Kansas City, Mo. While the fight is local, he decided to take his training back to Las Vegas.

“I’ve got some new coaches and some new guys helping out, so I’m trying to get adjusted to that,” Elliott explained. “I feel like I’ve got a good group of people behind me, and I brought some people with me, and, so far, things are going really well.

“I’m out here training with coach Robert Follis at Xtreme Couture. He was one of the coaches on my season of The Ultimate Fighter, and he actually cornered against me on the show. We talked a lot and I liked what he said, so I’m going to be out here for most of my camp and all the way up until my fight.”

Elliott saw an opportunity arise from his time on TUF, and he capitalized on it. At Xtreme Couture, he has been able to get some new looks from other small fighters. He views this as a way to really prepare for an exciting match-up. At UFC on Fox 24, he will face fellow UFC vet Louis Smolka, but that was as much of a surprise to him as it was his manager.

“It was actually rumored at first, before I knew anything about it,” Elliott said. “That’s the second time I found out about an opponent through the internet. I thought I was fighting [Ali] Bagautinov, so I messaged my manager, and he said he’d never heard of [a fight with Smolka]. Not long after that, my manager hit me up again and said that’s my opponent.”

Smolka is currently on a two-fight skid. While Elliott may be coming off a loss of his own, it was to a man who has never been defeated in the UFC Octagon. Prior to the defeat, Elliott was 3-0 in Titan FC, before cleaning up on TUF. Smolka is currently ranked 12th in the division, while Elliott sits at ninth, so this will definitely be a bout for a spot in the top-10.

“Ideally, I would win this fight and get another win and then get another title fight,” Elliott said. “It would be nice to get the rematch with Demetrious, but that’s really not the fight I want. He’s not an exciting fight for me. Getting the belt is cool, but I want to fight really exciting guys — guys like Cody ‘No Love’ [Garbrandt] and guys who are going to come out and try to knock you out and fight with some heart and emotion. Those are the fights I want.”

Elliott is an enigma. He wasn’t super thrilled about his time on TUF, and he’s not afraid to say it. He would love to be a UFC champion, but he doesn’t care to fight Johnson again. Even if other fighters feel the same way, some of them are not man enough to say it. Elliott could not care less, though. Most fighters are absolutely chomping at the bit to fight in their hometowns, but Elliott almost wishes his next fight was somewhere else.

“I mean, it’s cool,” Elliott said. “I’ve lived there for years, and the fight following in Kansas City is not very big. I lived there for a long time, and I never got recognized as a fighter. When people find out I’m a fighter, they usually ask me about some amateur fighter they think is more popular than I am. When I’m in Vegas, I get recognized all the time. People are fight fans out here. They know the fight game, they know the weight class, they know the TV show.

In some respects, Elliott might be difficult to understand, but it depends on what lenses he is viewed through. In the fight game, which is full of one-dimensional people, his general views and how he expresses himself may seem somewhat mysterious. In actuality, he is just a down-to-earth, normal guy who likes to drink beer, spend time with his family and friends, and put on exciting fights. He certainly doesn’t train his ass off to bore people. On Saturday, Elliott will be back in K.C. and ready to show people why they should know his name and recognize his face.

“Just like always, my fights are action-packed,” said Elliott. “I’m looking to make this one quick. I’ve changed my style quite a bit in the last few fights, and I’ve made some adjustments in this camp. You’re going to see a different Tim Elliott.”