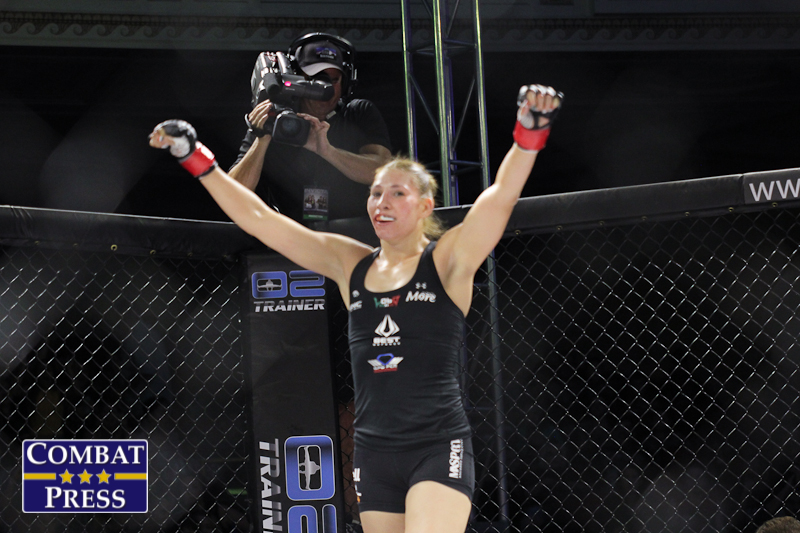 UFC Fight Night this weekend, for fans of female fights, gives us a lot to be excited about. Three bouts that each for different reasons have me looking forward to them. So let’s get into them.

This is the main event for the card, and with good reason. This contest has title implications at bantamweight, especially for Aldana, who is probably one win away from a title shot.

Holm comes in after going 3-2 in her last five outings. Those losses came to Amanda Nunes and Cristiane “Cyborg” Justino, so it’s difficult to look at those too negatively. With Holm, you tend to know what you are going to get. Her preference is to throw kicks and use clinch work against the cage.

Let’s talk about that cage work for a minute. Some find it boring — I get it, it’s not always the most exciting — but, for the most part, it works for her. Believe me, while it may not be “fan friendly,” it is grueling work. Don’t believe me? Here is a little homework for you. Find someone who weighs as much as you or in the vicinity of what you weigh. This being a five-round fight, I want you to alternate — take two minutes trying to hold that person against a wall as they try to escape, don’t even worry about the punches and knees that the fighters would be throwing, just worry about holding them there. Every two minutes, rotate, with no break, and just spend two minutes trying to escape or reverse the person, both trying as hard as you can. Do that for 25 minutes. If anyone does this, let me know how it went.

Now, let’s talk about Holm in this fight. This will be her strategy. She’ll want to throw those kicks and do that cage work. Her biggest trouble will come if this fight turns into a brawl. That is when Aldana will have her best shot. How do you avoid that? Well, one way is kicks to keep your opponent off of you. Another way is to put their back on the cage. These are the things Holm does really well, and they are the things that actually will likely work best for her. Round one, I see being mostly about the kicks. Holm will feel Aldana out and then we can see that cage work come into play. Another bonus is that this is a five-round bout. If Holm can put Aldana’s back on the cage and make Aldana carry her weight, then Aldana might be tired by the later rounds. When you get tired, your hands drop. If your hands drop, you are much more likely to get tagged. So, Holm’s head kicks would become extra dangerous.

So, we know what Holm wants to do. Aldana and her team know, too. So, how does the Mexian star avoid it? She needs to not be stationary. Don’t stand in front of Holm and avoid circling into those potential head kicks. By not being stationary, I don’t mean run; I mean be active. She should throw strikes, but at different angles — throw, move, throw more, and end some of those combos with leg kicks of her own. She needs to make Holm’s legs sore and possibly reduce Holm’s desire to throw kicks. The movement also makes the clinches harder to achieve. If Holm does get those clinches, Aldana should get underhooks as soon as she can. If she can get those quickly and reverse position, then she can try to break off the clinch quickly and, in doing so, she now has Holm’s back to the cage and a chance to land punches while Holm has limited movement.

Aldana might have interest in taking Holm down as well. This could be smart. If she lands an early takedown or two, even if she doesn’t do anything with it, then she can make Holm think twice before throwing some of those kicks. Aldana’s confidence is at an all-time high after winning five of her last six bouts, and a fast start for her will up that confidence level.

This fight is going to be a lot about strategy and who can implement it, and that increases my excitement for it.

This is another affair where each fighter will have very specific strategies, and neither will want to get involved in the style of fight their opponent wants.

De Randamie comes in having lost only twice in her last nine fights. Both losses came to the aforementioned Nunes. De Randamie loves to strike and will be very happy if she can make this a kickboxing match. The best way to beat her is to put her on her back, and she knows this. She also knows Peña is good at putting people on their back.

I don’t expect de Randamie to come out overly aggressive, because she can end up on her back quickly if she gets too wild and comes in too close. Instead, she’ll use kicks and punches from a comfortable range, which her three and a half inch reach advantage allows, and try to batter Peña. The only time she will want to come too close is if she is able to back up Peña against the cage. If she does get put on her back, de Randamie is a survivor. She can be put in bad positions, but she finds a way to survive. If she gets taken down, she’ll get to the safest position possible — guard — and keep Peña from advancing. She can’t be afraid to just hold Peña there, stall it out, and force the referee to stand them up. However, she can’t get put on her back to begin the round, because if Peña is able to be active on top, then she does not want multiple minutes of trying to defend against submissions or ground-and-pound.

Peña fights for the first time in over a year. Her last fight was a July 2019 win over Nicco Montaño. In describing de Randamie’s plans, I pretty much also gave a glimpse into Peña’s strategy. Peña does not want to stand and bang with de Randamie. She wants it on the ground as early and often as possible. It will even be dangerous to strike her way into those takedowns, so her best bet to get there might be to shoot in, feint some punches, get de Randamie’s hands up, and shoot in for a double leg. De Randamie will have trouble defending those. If Peña can do this early and frustrate or tire de Randamie, then the takedowns will become easier and easier as the fight goes on.

When Peña gets the fight to the mat, she’ll have to be active. She can’t just settle for being on top. She must throw punches and keep looking to advance. If a submission opportunity is there, great, but don’t try to force them and risk losing a great position. The longer she’s there, the more likely such an opportunity will open up. She shouldn’t feel a need to force one. Plus, being active in some way or another keeps the referee from having to make the decision to stand them up.

This seems like a short and simple breakdown, but the strategies of both fighters are pretty simple and obvious.

This has “Fight of the Night” written all over it. These are two great strikers at a smaller weight, which could lead to non-stop action.

Lookboonmee is 1-1 in her UFC career since coming over from Invicta FC. She most recently lost a decision to Angela Hill. Her biggest problem is that she is a small strawweight, but here she has an opponent where I don’t think that is going to matter as much. She will be the smaller fighter, but if this fight goes the way I see it, it’s not going to be a significant issue.

Lookboonmee’s biggest weapon is going to be her leg kicks. I expect her to start chopping away at Frey’s legs as soon as possible. Punches, of course, will come, but she will probably be looking to damage Frey’s legs. She won’t shy away from a firefight, but she won’t look to initiate one either. The more she can do damage with those leg kicks, the more she can limit Frey’s mobility, and the more she can continue to land them. Then, maybe she can open up things above the waist.

Lookboonmee will want to avoid the clinch as well. Frey will be stronger than her. In the clinch, Frey will most likely be able to control it and put Lookboonmee’s back against the cage. From there, she will take opportunities to back off, land hard punches and then get right back into the clinch if she chooses.

Frey comes off a loss in her UFC debut in a bout where she was doing really well against Kay Hansen before she was submitted in the third round. Frey is a very good striker and will be willing to try to strike with Lookboonmee early and see how that goes. If it’s going well, she will stick with it. If not, look for her to try to clinch. Frey is very strong. In clinches, she can really muscle Lookboonmee around, land some knees and elbows, and gas out Lookboonmee or even drag her down if she chooses. Her top priority will be to check kicks when she can and not let her legs get abused too much, because that will impact every single different way that she might have to win this fight.

This is the only one of the three female fights not on the main card, but it will very likely be the most exciting one. Don’t miss it.