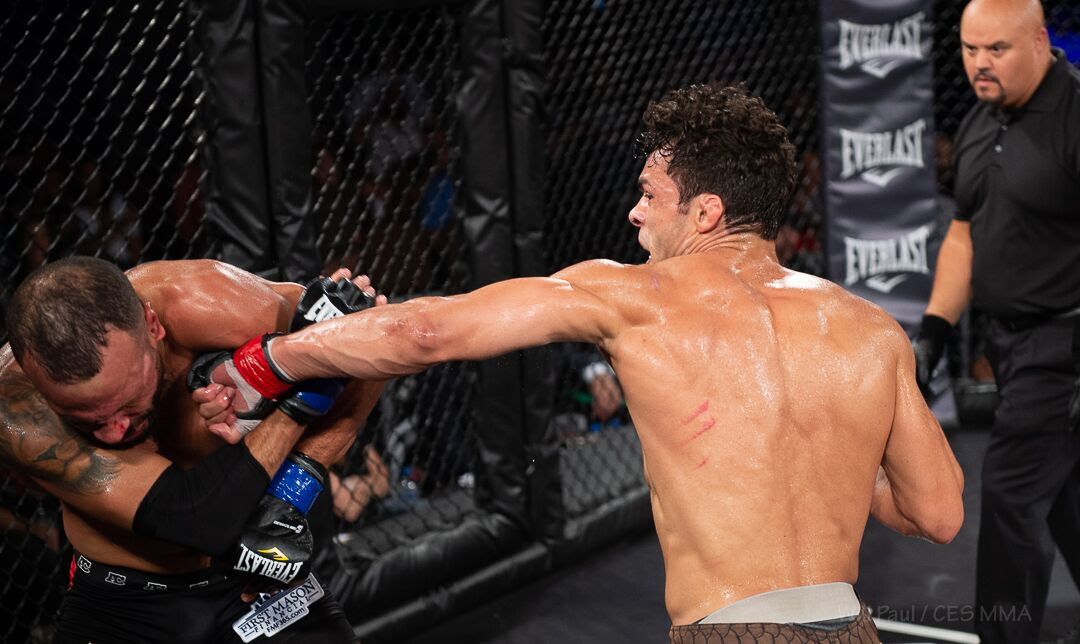 Don’t sign the contract unless you are ready to fight.

The above message is one that Vinicius “The Brazilian Bad Boy” de Jesus wants to send to all of his potential opponents. In his 11-fight professional MMA career, de Jesus has only lost twice, both times by split decision. He has finished his opponents in six of nine wins, and his biggest frustration comes in fights that go the distance.

“I get frustrated when the opponent realizes how tough I am and then they try to run away from the fight,” de Jesus told Combat Press. “It’s hard to put on a great performance when the opponent is not willing to take a shot.

“That was my biggest lesson from my last two fights. When these guys don’t want to come fight with me, it’s hard to put on a good show. In my first world title fight for CES, I was able to go five rounds at full capacity. In my last fight, I was able to finish him in the third round.”

Brazailian Jiu-Jitsu black belt is no stranger to competition. He competed in the Combat Jiu-Jitsu Worlds in August 2019. In MMA, he earned the CES welterweight strap with a March 2019 victory over Jeremiah Wells and defended it with a knockout of Chris Lozano in September. His focus then turned to a new belt to target: the Legacy Fighting Alliance 170-pound championship.

On Friday night, at LFA 88 in Sioux Falls, S.D., de Jesus headlines a big card. The Brazilian faces Jaleel Willis for the vacant welterweight title. Willis is currently riding a three-fight winning streak, with his most recent win coming under the Summit FC banner where he took a decision over James Horne in March.

“Willis is a very high-level competitor,” de Jesus said. “He’s 12-2, 28 years old, and I know he’s going to be willing to come forward. This is what I’m looking for. I want that competitor who is going to try to knock me out or take me down — and if he tries, I’m going to shut his lights out.

“That is the reality I always give to my opponents. At first, I give them a clean shot. They realize they don’t know if they’re going to keep moving forward much. Willis isn’t going to be any different, man. The first time he feels my punches and kicks hitting his body, he’s going to regress a little. I hope he keeps his competitor mindset and keeps moving forward, bringing the fight to me.”

Last year, de Jesus was doing most of his training at his own gym, while also cross-training camps between the Renzo Gracie Academy in New York City, Fighting Arts Academy in Milford, Conn., and Heavy Hitting Boxing & Fitness in Stamford, Conn. However, most of this camp has been done at Fighting Arts Academy with Nick Newell for various reasons, including gym closures and his business shutting down completely.

“I was grateful that I closed my own gym before the whole pandemic,” de Jesus said. “Life was really hard. I have four children, and my wife was working really hard. It turned out that my gym was not working and was not getting enough attention, because I was putting so much attention on my career and my family. So, I closed my gym before the whole pandemic happened. The pandemic has, thankfully, not reached my family as much as it has affected the whole world. We have stayed very safe, very healthy, and very strong, and we have been able to rethink all of our priorities.”

The biggest priority right now for the 30-year-old de Jesus is a decisive LFA title win over Willis to get on the UFC’s radar.

“I want to get the attention of the UFC — you know, [UFC President] Dana White and [matchmaker] Sean Shelby — and, hopefully, I can finish the year with a UFC contract,” de Jesus said. “I know everything comes together with my performance this Friday, so I’m really focusing to make [it] one of my greatest performances.”

De Jesus brings an exciting style into the cage, and he’ll attempt to do so again on Friday night at LFA 88. It has been a crazy year, but a big win in a fight that airs live on UFC Fight Pass would definitely keep things moving in the right direction for de Jesus.