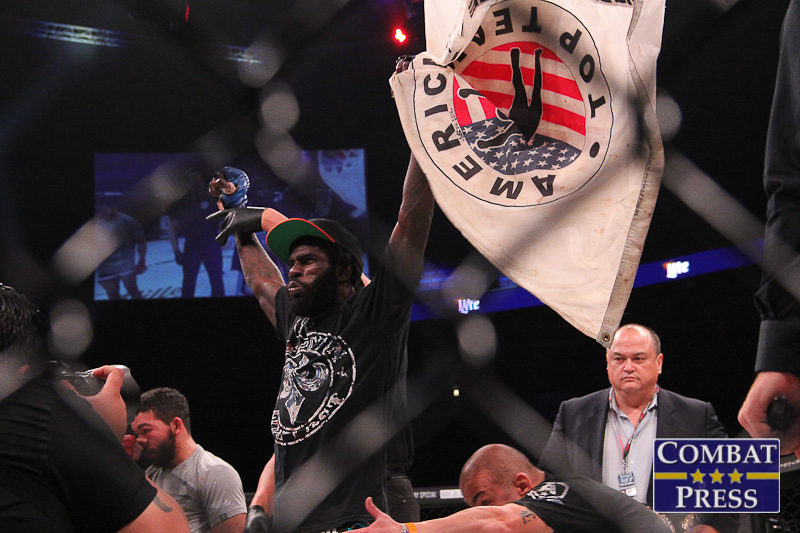 The train continues to roll for Bellator MMA. The promotion’s schedule of weekly events takes the company to the Mohegan Sun Arena in Uncasville, Conn.

Bellator 178’s main event is a familiar rematch. Daniel Straus will once again meet Patricio Freire in a featherweight title fight. Straus recently won his title from Freire, but the fight was close enough to warrant a rematch. This will be the fourth meeting between the two men. Freire won their first two encounters.

The co-headliner is a women’s flyweight battle pitting Ilima-Lei Macfarlane against Jessica Middleton. The two 125-pound fighters are currently undefeated and looking to be one of the first women up when Bellator decides to crown a flyweight champion.

A.J. McKee, Jr., also takes part in the festivities. The featherweight is slated to take on Dominic Mazzotta. McKee has created a big hype train by kicking off his career with seven straight victories. He seeks to remain undefeated against Mazzotta to continue his climb to the top.

Lightweights round out the main card, with Bellator veteran Saad Awad looking to break a two-fight skid when he fights Ryan Quinn.

After two previous losses to Patricio Freire, Daniel Straus recently beat the Brazilian to capture the Bellator featherweight title. Now, he has to defend it in a rematch against Freire. This will be the fourth time they have fought. Will this fight resemble Freire’s two winning performances, or will it look more like the recent fight Straus won? If Straus wins again, they’ll be tied at two wins apiece. Would fans really welcome a fifth fight between this pair?

This is really unprecedented in modern MMA — to see two fighters go not just once, twice or even three times, but four fights. In fact, even giving a prediction seems highly challenging. They have three prior fights. They know each other and can adjust accordingly.

There is so much tape to watch, and all of their fights have been great back-and-forth encounters. For every takedown Straus lands, Freire has a strike of his own that lands flush. At this point, it isn’t whose style wins, but who has learned the most from their previous fights. Straus won the last affair after dropping the first two. He looked to learn a lot and came out with the victory. Freire had won the first two. It’s easy to say he rested on his laurels, believing he had the third fight in the bag.

The two men are very close in skill level. Both possess a sound ground game. Freire has a Brazilian Jiu-Jitsu background and Straus sports a strong wrestling base. Even in the striking, it’s close, though Freire gets a slight edge. This isn’t a knock on Straus, who is a very good striker in his own right. These two traded in a lot of exchanges in their first three fights, and they split those exchanges down the middle in terms of who won.

If this fight goes the distance, Straus wins with better control in both the striking and on the ground. Freire needs a finish. The Brazilian is a much more dynamic power striker and more aggressive in hunting for a stoppage.

A fifth fight doesn’t seem too far out of the realm of possibility. Heck, a sixth fight doesn’t really, either. These are two of the best fighters Bellator has in a division that seemingly rotates who challenges for the title between three or four guys. All of their fights so far have been great back-and-forth tilts. If this fight produces like the last three, a fifth fight would be an acceptable proposition.

After running through four Bellator foes, Ilima-Lei Macfarlane is back for her fifth Bellator outing. If she gets past Jessica Middleton, is it time for Bellator to book a flyweight title fight involving Macfarlane? Who would be the top candidate to face her?

It’s surprising we haven’t already had a women’s flyweight title fight. Bellator brought in a lot of talent for the division, but they have taken a patient approach while building up the division and marketing the fighters. Bellator can only have these flyweight fights for so long without crowning a champ. People will start to wonder what the point is of a division without a champion.

Macfarlane is coming off solid victories over Rebecca Ruth and Emily Ducote. Ruth beat Lena Ovchynnikova, one of the women projected to be a contender for the inaugural title, and Ducote has gone 3-1 in Bellator with her lone loss coming against Macfarlane.

Macfarlane should get past Middleton. She is a better-rounded fighter who has a lot of avenues to victory with her striking and grappling. Then, we should see the title fight finally booked. The best bet for Macfarlane’s foe would be Anastasia Yankova. Yankova is a perfect 5-0 and is coming off of a win earlier this month against Elina Kallionidou. The timing of their fights matches up perfectly to set up a title bout for the late summer.

A.J. McKee, Jr., has spent his entire pro career with Bellator MMA. He has a perfect record through seven fights. If he can get past Dominic Mazzotta, a 12-1 prospect, will McKee land a spot in a title bout against the winner of the evening’s headliner?

McKee shouldn’t get a title shot this early in his career. He is a great fighter and a highly talented prospect, but he hasn’t faced the top competition of the division. A win over Mazzotta would be a good start, but it doesn’t make McKee a title contender.

McKee has been a force to be reckoned with so far in his career. His grappling and striking have looked as good as that from any prospect over the entirety of Bellator’s existence. McKee is certainly the next big thing for the promotion. He hasn’t been protected to the lengths of Michael Page, but he hasn’t really taken the next step against one of the better veterans on the roster. Whether it’s because Bellator is trying to get McKee the title shot without a big risk of a loss along the way or if the company just doesn’t feel he is ready, the next step just hasn’t happened yet.

If McKee were to get title shot against either Patricio Freire or Daniel Straus, it would be a big risk. Keep in mind, all seven of McKee’s fights have come in Bellator. He hasn’t fought on the regional or developmental circuits, only for one of the bigger promotions in the world. Bellator would be gambling on a star’s future by throwing him to the wolves.

McKee should get the victory against Mazzotta. His body of work is highly impressive. McKee has some great, dynamic striking that he uses very well in combinations to create the openings necessary to extend his control over the fight. This helps lead him to victory, whether it be in setting up the knockout or bringing the fight to the mat, where McKee can out-grapple his opponent.

McKee, who started off with five straight finishes, has seemingly gone away from stopping every opponent he meets. His last two fights ended on the scorecards. Mazzotta’s lone loss came against Cody Garbrandt, who now reigns over the UFC’s bantamweight division. McKee can add his name next to Garbrandt as one of the few fighters to top Mazzotta.

They’re in separate fights, but they’re two prospects with incredibly high ceilings. Both were great collegiate wrestlers that have made the move to MMA. It’s nice to watch these sort of fights, because you get to see the future champion when he was just a prospect and watching that sort of rise is wildly amazing.

Both of these guys have big futures, and these prelim fights are just the first step.