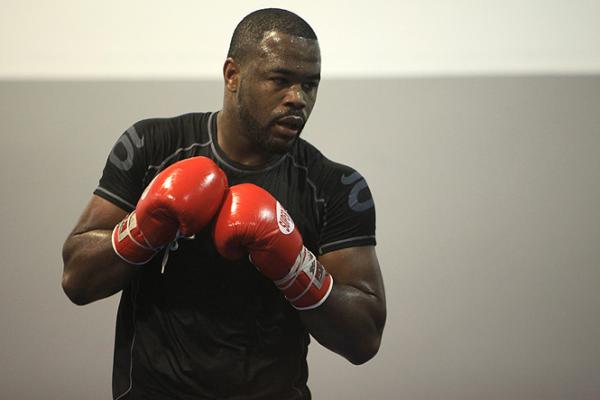 Will Moving to Middleweight Revitalize the Career of Rashad Evans?

Anybody who was watching the UFC during its mainstream rise in the mid-2000s knows exactly who Rashad Evans is.

This is a fighter who has probably gone through every possible up and down someone can experience in an MMA career. He won The Ultimate Fighter 2 as a heavyweight all the way back in 2005. He knocked out UFC legend Chuck “The Iceman” Liddell at UFC 88 in 2008. He won the UFC light heavyweight title just over three months later at UFC 92. “Suga” has a laundry list of accomplishments to his name.

His highlight-reel head-kick knockout of Sean Salmon at UFC Fight Night 8 was enough to convert plenty of people into Evans fans, this writer included.

Well, exactly 20 fights into his career and at 37 years of age, Evans has finally decided to make a pretty dramatic change. The former light heavyweight contender is moving to the middleweight division for what could potentially be seen as a final run at the title in a completely new weight class after a floundering few years where he’s only won twice in six fights.

Will this move help Evans find the same title success he had years earlier?

Evans is well past his prime, and he doesn’t exactly have time on his side. Injuries have definitely played a role in slowing him down for more than two years, but he’s had a lot of success in his career due to his wrestling and overall athleticism. As long as Evans can stay healthy, he has more than a decent chance to make an impact. The talent is definitely there. He still has a lot to offer.

About a week or so after making the big announcement, Evans was informed that his next fight, his middleweight debut, would come against Tim Kennedy at the historic UFC 205, which would take place at the world-famous Madison Square Garden in New York City for the first time ever. Kennedy hasn’t had a fight in over two years and Rashad is obviously in his new weight class. It was viewed as kind of a tuneup fight for Evans.

Unfortunately, the fight that was supposed to take place in New York fell through under some strange circumstances. Evans, who did his pre-fight medical exam, apparently had some irregularities pop up which got the attention of the New York State Athletic Commission. Luckily, the contest has been rescheduled for UFC 206 in Toronto, so both Evans and Kennedy will have a chance to fight pretty soon.

Hopefully Evans can get his day in the Octagon very soon and potentially make a run at the title. Evans and the current middleweight champion, Michael Bisping, crossed paths at UFC 78 in 2007, where the New York native just barely edged out the fiery Brit in a close split decision victory that could have gone either way. It’s safe to say they could have some unfinished business very soon, regardless of whether there is a title on the line.

The middleweight division is currently stacked with killers, though, and most of them have some sort of verbal (as well as physical) beef with Bisping, so I’m sure they’re going to want to get their hands on him as soon as possible, especially with how much the champ likes to talk. However, here’s hoping that “Suga” Rashad gets his own crack at Bisping, as well as the middleweight title.