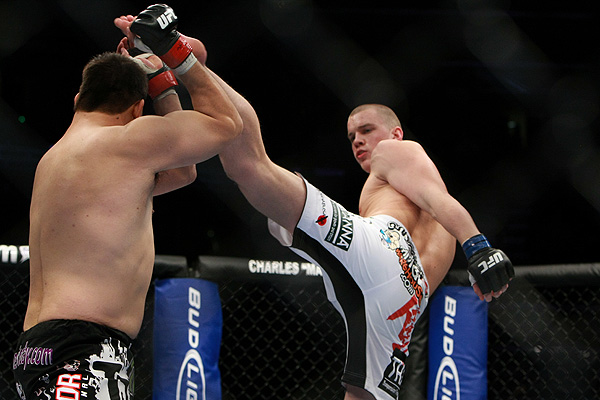 After roughly a month-long hiatus from live action — unless you count Dana White’s Tuesday Night Contender Series — thanks to the mega-fight between UFC lightweight champion Conor McGregor and Floyd Mayweather Jr., the UFC comes back to the Octagon on Saturday, Sept. 2, in the Netherlands. The UFC also doesn’t waste any time in bringing us perhaps the biggest fight possible (literally) on this card, as the main event boasts two of the tallest fighters in the UFC.

Stefan Struve, all nearly seven feet of him, faces former Bellator MMA heavyweight champion Alexander Volkov, who comes in at an impressive 6-foot-7. The UFC’s heavyweight division is in desperate need of some new contenders, and though Struve has been a member of the UFC for more than eight years, he hasn’t yet sniffed a title shot. Volkov was a champion in the rival Bellator organization and enters this bout following a victory over UFC veteran and recent Bellator addition Roy Nelson. With a dearth of new blood in the heavyweight division, can one of these heavyweights end up looming large over the division and possibly present a challenge for UFC heavyweight champion Stipe Miocic?

The fights air exclusively on UFC Fight Pass, with the preliminary card starting at 11:30 a.m. ET and the main card starting at 3 p.m. ET. Combat Press writers Chris Huntemann and Sal DeRose preview the event in this edition of Toe-to-Toe.

Former Bellator heavyweight champion Alexander Volkov has won his first two UFC fights. Can he make it three against Stefan Struve? Furthermore, is this the start of a run to another piece of heavyweight gold for the Russian?

DeRose: This is going to be a tough fight to pick. Struve has been steadily climbing in his past few fights, but Volkov has a huge amount of potential in any fight. Volkov is currently riding a four-fight winning streak overall, including those two UFC victories over Timothy Johnson and Roy Nelson.

Those two victories weren’t the huge dominating victories for Volkov that you would expect. The Russian ran through the Bellator heavyweight tournament in 2014, but since then hasn’t looked nearly the same. Volkov has good potential in his striking and, surprisingly enough, almost negates Struve in the size game.

Struve has previously shown timidity in his striking and the inability to use his range advantage to produce anything meaningful, but that seems to have changed during his current two-fight winning streak. Struve was able to knock out Antonio “Bigfoot” Silva with a sweet elbow early in their fight. Then, he came out and secured the submission victory via d’arce choke against Daniel Omielanczuk.

The new and improved Struve seems like a legitimate contender in the heavyweight division. He’s developing the striking skills to make him a dangerous member of the upper echelon. However, history has demonstrated that he has trouble keeping this style together. Struve is an awesome fighter, but Volkov is one of the few guys in the division who can neutralize the amazing size advantage that Struve, who sports an 84-inch reach, usually enjoys. Struve only stands four inches taller than Volkov and sports three inches more in reach. That’s a notable difference for Struve from his fights with Omielanczuk, where Struve enjoyed an 11-inch height and 10-inch reach advantage, and Silva, where Struve was seven inches taller and had four inches in reach. It’ll be interesting to see if Struve can still work effectively against someone closer in size.

If Volkov fights to the potential that led him to tear through the heavyweight tournament in Bellator, he will make this his fight. With a win, there’s a pretty good shot for a Volkov title run in a shallow division. Of course, he’ll truly fight an uphill battle once he encounters the top five in the division.

Huntemann: Let’s focus on Struve and the very impressive run he’s made into the top 10 in the UFC’s heavyweight division. It was just a couple years ago when we weren’t sure if Struve would ever fight again, period, after dealing with some heart issues. This makes his turnaround all the more remarkable. He’s won three of four, with an inexplicable loss to Jared Rosholt buttressed by victories against the likes of the aforementioned Bigfoot and Antonio Rodrigo Nogueira. Struve uses his exemplary reach better than most, defending nearly half of the strikes levied against him and avoiding basically two-thirds of the takedowns attempted against him.

Struve will need every inch of his reach advantage against Volkov, who absolutely peppered Nelson in his last fight to the tune of 122 total strikes. Volkov will come at Struve fast and furious, which might be exactly the type of fight Struve wants. Volkov was a champion in Bellator for a reason. The guy can obviously fight. If he faced the Struve of a few years ago, pre-heart condition, I might like Volkov’s chances a little more.

However, the new and improved Struve seems to be peaking at the right time, which is particularly notable given his height and the fact a fighter that tall hasn’t been seen in the Octagon before, nor has anyone that tall enjoyed the type of success so far that Struve has enjoyed.

The heavyweight division badly needs some new contenders. Miocic has come awfully close to cleaning the division out, believe it or not. He faced Struve in 2012 and lost, if you can believe that too. Struve will defeat Volkov and could enter the conversation for a rematch with his old rival. I’m sure Miocic would be willing to take him up on it.

This card features quite a few fighters who have yet to separate themselves from the pack and become a title contender in their respective division. Outside of the main event, is there another fight that could introduce us to an emerging contender?

Huntemann: I’d like to see this fight card turn into the launching pad for Bryan Barberena’s drive to welterweight contention. Barberena is probably best known for derailing the Sage Northcutt hype train last year, but he has since won two of three. “Bam Bam” has nine knockouts in 13 career victories, and he’s facing another impressive fighter in Leon Edwards, who’s only lost twice in seven UFC fights since 2014.

There’s a shortage of viable title contenders in the UFC welterweight division, so another knockout by Barberena could catapult him into the division’s top 15 and some fights against some bigger names. Wouldn’t it be great to see Barberena test himself against the likes of former champion Rafael dos Anjos or Santiago Ponzinibbio?

DeRose: Barberena is a hell of a pick, but how about Rustam Khabilov? He’s on a four-fight winning streak, and it wasn’t long ago when the Russian was fighting the likes of Benson Henderson and Jorge Masvidal.

Khabilov hasn’t fought at that level since his loss to the aforementioned Henderson, but it has been a steady progression over the last five fights. We’re talking about a fighter who has already faced the elite, but failed the test. A win here puts Khabilov at five consecutive victories. If he emerges with the victory, then the UFC should give him a slight bump in competition. The main thing going against Khabilov is that he missed weight in his last fight. That’s a huge no-no and puts a fighter in the UFC’s dog house. Yet, if Khabilov makes weight and gets the win, he is definitely one of the more noticeable guys on this card.

DeRose: If I had to choose one of these guys, it’s going to be the only undefeated fighter in the bunch, Wilkinson.

Wilkinson will face Siyar Bahadurzada, a solid opponent. That’s a great name to add to his resume. Wilkinson has won 11 fights in his career and only one of those has gone to decision. He will look to finish the fight. He could very well be one of the best candidates for a performance bonus when all is said and done.

Huntemann: Mainly because his name is the easiest to type, I’m going to suggest that you keep an eye on Burnell.

Burnell only has one career loss out of nine overall fights. He seems to fancy himself a ground-based fighter, with five submission victories and no knockouts. Burnell has a trial by fire for his UFC debut against Michel Prazeres, who’s only lost twice in 24 career fights and has nine submission wins of his own. If you’re a fan of the ground game, this is a fight you’ll want to see.

Huntemann: Bryan Barberena and Leon Edwards seem to walk around with a chip on their respective shoulders. They always feel as if they have something to prove. That usually lends itself to exciting performances and fights, and this fight won’t be any different. These men could easily steal the show. Barberena is ornery and hard-nosed. He’ll smothers Edwards, unload on him and get a finish.

Bahadurzada is working on a breakthrough into the upper parts of the welterweight division. He is coming off a victory over Brandon Thatch, one of the better guys in the division. Wilkinson is out to protect his unblemished record. The Aussie’s last six fights have all been finishes. This fight is a can’t-lose for the fans.

DeRose: Preferably something else. Anything else. This isn’t exactly the best card of the year. It leaves a lot to be desired. There has to be a good alternative out there. Maybe watch the main event later, but don’t go out of your way for this one.

Huntemann: Since the main event of this card likely features the UFC’s two tallest fighters and takes place on Labor Day weekend, I have the perfect suggestion: a frosty, cold tallboy beer. What better way to enjoy fights with tall guys than with a tall beer?