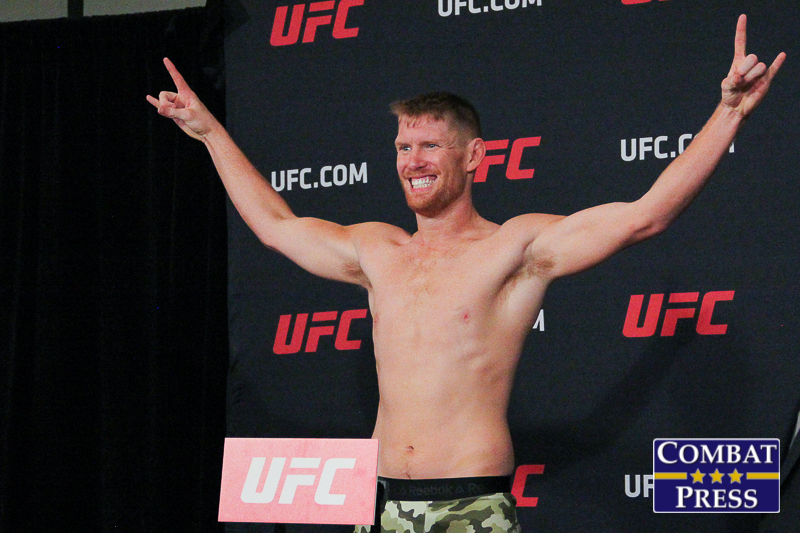 And, the award for the busiest guy in the world goes to… “Smile’n” Sam Alvey.

In case you didn’t know, Alvey has likely fought the most of any UFC fighter in the last three years, which will hit 12 bouts on Saturday night at UFC Fight Night 114 in Mexico City. He is also a husband, a father of three children, and is in the process of adopting a fourth as this article is written. Alvey also teaches classes at Dan Henderson’s Team Quest in Temecula, Calif. He’s always in camp, he’s always teaching others, and, as any parent knows, he is 100-percent parent on a 24/7 basis. So, one can only imagine how difficult it is to fit an injury into the equation.

Alvey’s last fight was at UFC Fight Night 108 in April as he faced fellow longtime veteran of the sport Thales Leites. He lost all three rounds on the judges’ scorecards, but it did not come without an asterisk.

“It was kind of a weird fight, because I went into the fight injured,” Alvey told Combat Press. “If I had to take something away, it’s don’t go into fights injured. He kicked my lead leg in the first five seconds, which rolled my bad ankle, and it was all downhill from there.”

Injured or not, Alvey is not one to ever back down from a fight, which is a theme that has rippled throughout his career. With 40 fights in just nine years, his average is more than four fights per year. So, it’s no surprise that he got right back to work as soon as his fight ended, even with a busted up ankle.

“The injury has healed perfectly. After the fight, the UFC helped me get all the physical therapy and everything I needed. It healed up very solidly, and the doctors were impressed by it. I’ve been playing with it, I can go on trampolines again, and I can do everything. I have no fear about my ankle being injured in this fight.”

In Mexico City, which sits at about 7,380 feet above sea level, the altitude is actually higher than the Mile High City of Denver. However, the altitude is arguably nowhere as near as big a challenge as his next opponent, former UFC champion “Suga” Rashad Evans. While Evans is currently riding a three-fight skid, he is always a formidable opponent, and Alvey is not taking this challenge lightly.

“When they offered him to me, I wasn’t cleared to fight yet,” Alvey explained. “I said yes, of course, but I wasn’t cleared yet. I was thrilled. Rashad has been one of my favorite fighters. I love the way he’s always moved and grooved in the ring. It’s really an honor to be able to fight him.

“The biggest challenge I have is that I can’t lose to decision. Of course, I respect his power and his wrestling and all that, but he moves so well that, even if I feel I’ve done enough to win the round, it’s probably going to go to him. He’s got that style and that flare to him when he fights, which is admirable. I’ve got to be real careful to try and not let it go to the judges.”

The last couple years for Evans have been somewhat lackluster. Alvey, on the other hand, has been performing very well. He cracked into the top-15 with a four-fight winning streak, but that was snapped with the loss to Leites. A win over Evans should catapult him back into the mix, and he has no intentions of slowing down.

“If I could fight another two or three times by the end of the year, I’d be thrilled,” Alvey said. “I don’t know if it will happen, but I’m hoping it does.

“I think a win against Rashad will give me more notoriety than anything else. I mean, it’s Rashad. He’s a champion. Not only is he a champion, he’s won The Ultimate Fighter, and he’s been through everything. I don’t know if I’ll get bumped much in the rankings, but my value as a fighter will go way up, especially if I get a dominant win.”

As Alvey is preparing for the trip to Mexcio, with his family in tow, he is very excited for the arrival of his new daughter next spring. Alvey and his wife McKey started the process earlier this year, and they will be growing their family, while he continues to grow his professional record.

“We’re about $12,000 into the process,” Alvey joked. “If everything goes according to plan, it should be about April by the time we get the little girl. She’s a little girl from Africa. We got the process right around my fight with Thales.”

On Saturday night, Sam Alvey will face Rashad Evans for his 41st pro fight on the main card of UFC Fight Night 114. He is a very busy man, but he’s always smiling along the way.