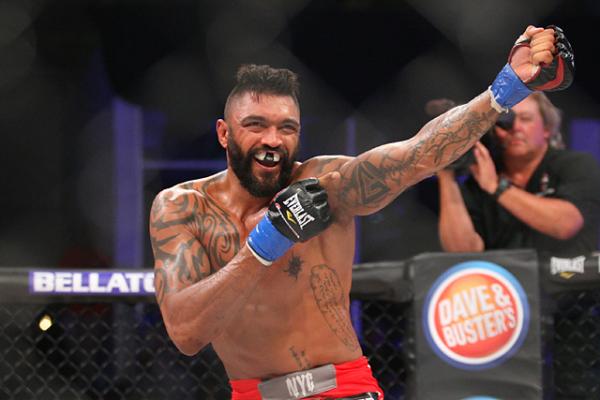 The event was headlined by a light heavyweight title fight between champion Emanuel Newton and undefeated Brit Liam McGeary. Newton entered the title defense riding a seven-fight winning streak. He had tasted defeat just once in the last five years and most recently defeated another Englishman, Linton Vassell, via fifth-round rear-naked choke in October. McGeary, meanwhile, had gone past the first round just twice in his nine-fight career. All six of his appearances in the Bellator cage had ended in the first frame.

The co-main event of the evening featured British knockout artist Paul Daley against Brazilian submission specialist Andre Santos. Daley had won six of his last seven, with all six wins coming by some form of knockout. Santos rode a six-fight winning streak into the match-up.

The event kicked off Friday with a preliminary card stream on Spike.com at 7 p.m. ET. The five-fight main card followed at 9 p.m ET on Spike.

Liam McGeary ended the British Invasion by becoming the fourth light heavyweight champion in Bellator history. McGeary came close to continuing his streak of first-round finishes when he had Newton in a few different submissions and came close to ending the fight with a triangle choke. Newton looked to avoid the submissions in the second round with a takedown near the beginning. McGeary once again used his size advantage to go for a triangle choke. McGeary then used the submission to scramble out and get on top of Newton to end the second frame. McGeary continued his submission attempts in the third round, but looked more to his striking in this round. McGeary landed effective punches from the outside that led to a guillotine attempt for the challenger. The fourth round saw Newton finally pick up the pace. Newton looked to land the spinning back fist, but couldn’t find a home. Newton then went for and landed a takedown where he was able to control McGeary for the remainder of the round. Newton once again landed a takedown in the fifth round and was able to defend against two submission attempts from McGeary. McGeary didn’t come close to finishing in the fifth and, instead, took home the unanimous decision nod in his favor.

Cheick Kongo’s stance was ready for the takedown, but Kongo himself was unable to stop Muhammad “King Mo” Lawal from successfully landing them. Lawal landed two takedowns in the first round after nothing much on the feet. Lawal also didn’t do much with the first round takedowns but control and grind Kongo on the mat. Lawal again used the takedown in the second frame to control Kongo and wear out his much bigger opponent. Kongo started to land some effective strikes in the third. Lawal once again shot for the takedown and after some time against the cage, Lawal was able to bring Kongo to the ground. Lawal’s ease at getting the takedown and controlling the fight gave him the split decision nod in his favor.

Andre Santos showed tremendous heart in his unanimous decision loss to Paul Daley. Santos opened with effective striking and only grew in confidence. Then Daley woke up in the middle of the first and was able to drop Santos to the mat. Daley landed more big shots once the two stood back up. The second round saw Santos take control with a takedown of his own after getting put on the ropes earlier in the round. Santos then landed a shot that wiggled Daley on the feet and went for a takedown, but Daley was able to defend before ultimately succumbing and giving up his back. The third round saw Daley once again dominate on the feet, dropping Santos twice in the round. Daley came very close to getting a stoppage at the beginning of the round, landing a lot of strikes, but couldn’t get the referee to step in. Santos continued to battle through the round and landed a takedown late and looked to finish with some ground-and-pound, but Daley was able to use the cage wall to get back to his feet and survive to the judges.

Linton Vassell looked for the takedown early against Rameau Thierry Sokoudjou. Vassell completed his second takedown in the first round and it was his most effective as he dominantly controlled Sokoudjou on the ground. Vassell grabbed the back of Sokoudjou twice, but was unable to fully sink in the choke. Once because Sokoudjou defended well with a wrist lock, and the other because Vassell was unable to sink his arm underneath Sokoudjou’s chin. Vassell landed another takedown in the second round and was once again able to grab Sokoudjou’s back for the third time in the fight. This time Vassell looked to soften Sokoudjou up with some ground-and-pound to lead to a rear-naked choke attempt. Referee Dan Miragliotta stepped in after a ton of unanswered shots from Sokoudjou to give Vassell the TKO victory.

A seven-inch reach disadvantage did nothing to dissuade Brennan Ward from closing the distance on Curtis Millender. Ward dropped to make his welterweight debut against Millender in the opening fight of Bellator 134 and was able to finish Millender early in the first round. The two began by trading shots and eventually led to Ward closing the distance often. Ward then landed a left-right combination that brought Millender to the mat. Ward took the opportunity to jump onto Millender’s back, flatten him out on the mat and sink in the fight-ending choke after a little trouble getting the arm underneath Millender’s chin.