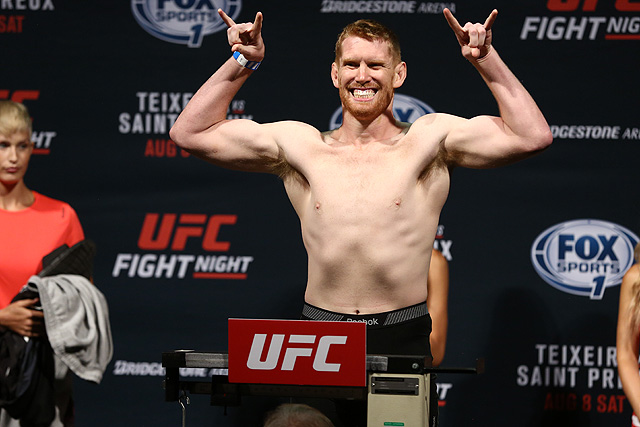 UFC on ESPN 4’s Sam Alvey: Fool Me Once

“Smile’N” Sam Alvey is one of the nicest guys in the sport of MMA, and he loves engaging with fans. He is also one of the most entertaining fighters in the UFC. He fights more often than most, having entered the Octagon an astounding 17 times in less than four and a half years. He will always take a fight, too, even on short notice.

Prior to last September, Alvey had only been stopped twice in 44 fights. He had one TKO loss at the hands of Derek Brunson in 2015, and he was submitted by Gerald Meerschaert in 2010. So, how did this hard-hitting killer, with 19 knockouts, all of a sudden drop two fights in a row via TKO? He firmly believes it was the ref.

Alvey had been rocked by opponents before in the past, but he’s damn near impossible to completely knock out. So, when he got rocked by Antonio Rogerio Nogueira early in the second round of their September fight, it was just another tough shot from which he’d have to recover. Or so he thought. Referee Marc Goddard saw it differently. Alvey’s legs had buckled badly, and Goddard stopped the fight as Alvey was going for a takedown. Alvey was upset, but these things happen.

Smile’N Sam’s next outing was in February, when he faced undefeated up-and-comer Jimmy Crute. Goddard was officiating again. Early in the fight, Alvey got rocked. Crute walked off like it was over, but it clearly was not. Crute attacked again and Alvey turtled up, but many of the shots Crute was throwing didn’t even land. Alvey had his thumb up, but Goddard could not see it and called the fight.

“He will not referee for me,” Alvey told Combat Press. “I respect him as a ref, and it’s a tough job, but he will never ref one of my fights ever again. I just don’t have to go to the cage, if they ever tell me it’s Goddard again. I guess I’ll cross that bridge if we get there. He knows how upset I’ve been over the last two fights. I wouldn’t expect him to want to be my ref again.”

Alvey, who is known for fighting every few months, actually stepped back after that last one. He needed time to decompress and process back-to-back losses, which he hadn’t suffered in three years.

Fighters, especially the most active and entertaining ones, work way too hard and put too much money into getting ready for a fight to have an early stoppage from a referee. However, officials have a very tough job as well. They only have one line of sight at any given time. Alvey gets that, but he’ll hope for a different official when he steps into the Octagon for the 18th time on Saturday night in San Antonio for UFC on ESPN 4. Alvey takes on Klidson Abreu. This is the first step in returning to his preferred busy fight schedule.

“If I could get another two fights in this year, that would be wonderful,” Alvey said. “After that first fight, I took a step back. I was pretty upset for a while about the stoppage. I’ve been ‘Mark Goddarded’ twice. I took a step back, and I let the anger fade before I took another one. I’m over it, and it’s all good.”

Abreu has been a pro since 2011. The Brazilian was 14-2 prior to entering the Octagon in February. He dropped his debut to Magomed Ankalaev by decision, but he still boasts a resume of 10 submissions and four knockouts.

“He’s a really talented fighter,” Alvey said. “I know he trained down at [Wanderlei Silva’s] camp down in Brazil for a long time. I believe he’s at American Top Team now. He’s got very good jiu-jitsu. He’s got heavy hands. He kicks like a mule. He’s a pretty complete fighter.

A classic striker-versus-grappler affair usually makes for an entertaining fight. Alvey is excited to get back in the win column. After two early stoppages, he will be ready to end this one in the first round. Then, he can get back on track for his ultimate career goal.

“I’m going to get that belt,” Alvey said. “I’ll take the [Michael] Bisping route. I will take my time getting there, but I will get there, and it will be great. For the immediate time, I’m going to get myself ranked again. I made it to number 11, and I really want to break into that top 10.

Alvey is coming off a rough patch in his career, but his great attitude remains intact. He’s ready to get back to his winning ways on Saturday night. His opponent is looking to gain some sort of relevance in the UFC, and that should set up another exciting outing from Smile’N Sam.

“I’m not a guy who likes to lose,” said Alvey. “Losing is terrible, and I’ve done too much of it. I’m going to come out, and I’m going to hurt this guy. I want to make sure that nobody wants to fight me on short notice ever again.”