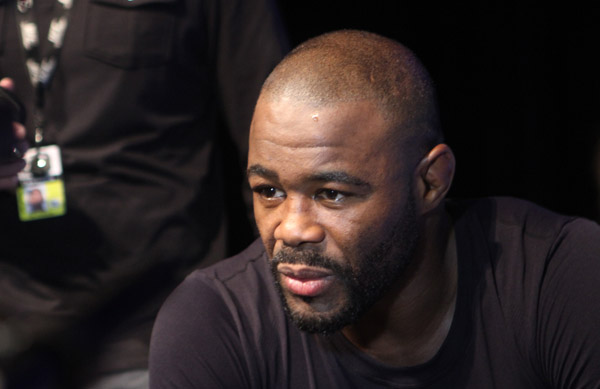 The End Is Near For Rashad Evans, But I’m Not Ready To Witness It Yet

This isn’t going to be the most objective of articles, but it will be honest. It’s also probably somewhat of a career eulogy for one of the better fighters the UFC has produced.

“Suga” Rashad Evans is a fighter I have always liked. I have always enjoyed watching him, ever since I first got interested in MMA over a decade ago. That’s why these words are so difficult to write. However, it’s very necessary to let out all the grief I’ve been feeling from watching him fall off of the face of the earth after getting to the mountain top.

Evans was known as one of the original UFC veterans from the days when the organization was starting to gain popularity. He was right there, fighting big names and cementing his place in a light heavyweight division that housed some legends of the best combat organization in the world.

In November 2016, I penned an article about Evans’ move to the middleweight division, which I saw as a longtime coming, especially for a guy who seemed fairly undersized for a division that has fighters who could possibly compete as heavyweights. Granted, when Evans won The Ultimate Fighter 2 in 2005, he was competing at heavyweight, but it wasn’t really considered his official weight class. Instead, he was taking a chance to fight on the show and make a name for himself, even if he had to fight guys who were considerably larger than him.

Similar to his stint on TUF, the Niagara Falls, N.Y., native also viewed the move to 185 pounds as an opportunity to make a name for himself, and be the “new kid on the block and have to earn [his] way through another division,” which is very difficult for someone who has already been a champion in another weight class. Evans, who defeated TUF 1 winner Forrest Griffin via third-round knockout at UFC 92 to capture the UFC’s light heavyweight crown, had an identical goal at middleweight, but it would not be as easy at this late stage in his career.

As is the case for many fighters, the move to 185 also had a lot to do with the fact that Evans was losing at light heavyweight quite a lot more than he ever had earlier in his career. He won just two of his last six outings as a 205-pounder.

The debut at middleweight finally came around for Evans. He took on judo specialist Daniel Kelly, who has also been known for his toughness and putting on gritty performances. Many fans probably saw this as a chance for Evans to really test himself. The match-up against Kelly was a long time coming, too, seeing as how a bout with Tim Kennedy had been canceled two times, due to strange irregularities in the pre-fight medical exam of Evans. It was almost like fate wasn’t allowing Evans to make the move. He had to keep waiting out his chance. Finally, once the Kelly fight came around, he was ready to go and looked absolutely ripped on fight night, which was a positive sign.

As advertised, the fight against Kelly was very competitive. Both fighters had their moments. They went back and forth a lot, with Kelly mostly grinding his way through the fight as Evans tried to stay out of any judo throws, while mixing in his striking with some of his patented wrestling. Unfortunately for the former Division I wrestler, he lost in a razor-thin split decision.

Despite the loss, it seemed like a promising start to Evans’ middleweight run. As an Evans fan, though, I was disappointed. Yet, it wasn’t the worst possible outcome for him, especially with how he was performing in his last couple fights at light heavyweight.

After the Kelly fight, Evans received another chance. This time, he was paired up against counter-striker and smiling enthusiast Sam Alvey, who actually knocked out the aforementioned Kelly in 2015. This was a good chance at retribution for Evans. He could prove himself against a younger guy who’s very good on the feet, as well as tough.

The fight took place last weekend at UFC Fight Night 114 in Mexico City, and it wasn’t anything to write home about. In fact, it was pretty much a snooze-fest of a bout, which was eventually edged out by Alvey in yet another close split decision loss for Evans. Unlike the fight with Kelly, however, this one consisted of both guys just trying to land the most minimal of shots. They were not really taking any risks or going for the finish. After the exciting fight with Kelly, who’s dangerous in his own right, I would have expected better from Evans.

I don’t really blame Evans for the loss, though, because Alvey is a very tricky fighter, mainly due to his counter striking. Whenever Alvey’s opponent tries to land a shot and they stay in the pocket, they put themselves in danger of getting clipped with one of Alvey’s strong left hooks. Alvey’s also a southpaw. It’s not like Evans didn’t know this, though. I thought he’d be able to crack the code quite easily with his veteran knowledge.

Evans has very good footwork and head movement, but, for some reason, he wasn’t really able to utilize those skills the way he should have. He landed a little bit here and there, but nothing that was even close to ending the fight. While Evans shouldn’t shoulder all the blame, it’s still disappointing to see how he performed. It’s not like Alvey’s style was a mystery.

Counter striker or not, however, people have to remember that Evans knocked UFC Hall of Famer Chuck Liddell out cold in 2008. Liddell is one of the most prolific fighters that has ever graced the Octagon, but Evans just put him away like nobody would have expected. “A lightning bolt out of nowhere!” was the immediate reaction from a shocked Joe Rogan, who was the color commentator that night at UFC 88. His knockout of “The Iceman” is not only significant because of Liddell’s status, but because he did it against someone with Liddell’s counter-striking style. That was amazing. Liddell loved getting in crazy brawl-like exchanges with his opponents, which is something he and Evans shared that night, as well. While Liddell usually got the better of his opponents in countering exchanges, Evans did what many would have thought was impossible when he beat Liddell that night.

When Evans scored the win over Liddell, he was just reaching his fighting prime. It’s been nearly a decade since then, but that doesn’t mean Evans should be losing his intelligence of how to execute a game plan in a fight. Maybe he doesn’t have the same kind of power he once wielded, but if he could beat Liddell, then I don’t see how Alvey would be such a challenge.

This is why I would have expected Evans’ fight against Alvey to go much better. Evans was facing a fighter who counters very well, and Evans not only has the striking ability to stand his ground against his opponents, but he can also take down his opponent if he wants. Perhaps, fighting a counter striker just made Evans generally more hesitant to exchange. Also, his performance could have something to do with the extremely high elevation in Mexico City, which tops out at 7,382 feet. For a guy who’s cutting 20 pounds more than he was doing throughout his career, that can’t be an easy atmosphere to fight in.

I’m trying to give Evans every possible benefit of the doubt, but excuses don’t do a fighter any good. Even at age 37 — he’s soon to be 38 in September — there’s no reason Evans can’t be champion again. Other fighters have done it. However, it’s a new day and age, and someone like Evans has to be much better prepared for potentially younger, stronger opponents.

In the case of his fight against Alvey, Evans knew exactly what he had to do. There was no mystery what his strategy should have been. He needed to land the jab and mix in some hard double-leg takedowns. It seems like this approach would have done plenty to get him the win. Even if in some way he was trying to make it happen, he didn’t do it well enough. As the professional that he is, Evans knows this, too, and he’ll make all the necessary changes for his next fight.

However, that’s assuming there will be another fight for Evans.

While he hasn’t made any hints about retirement yet, I’m definitely fearing that the day will come, especially now that he’s on a stretch where he’s lost four fights in a row, which stands as a career high. At one point, he had never even lost two in a row. That ended in 2013, when he lost to Antônio Rogério Nogueira.

Whatever the fighting future may hold for Evans, I, for one, am not looking forward to the day it comes to an end. Perhaps his issue is being in the wrong camp. Maybe he’s too old and cannot keep up with the younger fighters. However, he has a chance to do something special, even at this relatively late stage. He’s not in the “old man” stage just yet. Hell, even the division’s reigning champion, Michael Bisping, is 38.

Clearly, Evans is not at the championship level he once enjoyed. However, he’s also not too far gone. A camp change may be in the books for him. If it isn’t, then Evans needs to come up with some kind of solution, because he’s running out of very valuable time. As a fan, I’m just not ready to say goodbye to Evans, the fighter. Maybe I’m the only one who’s clinging to hope.