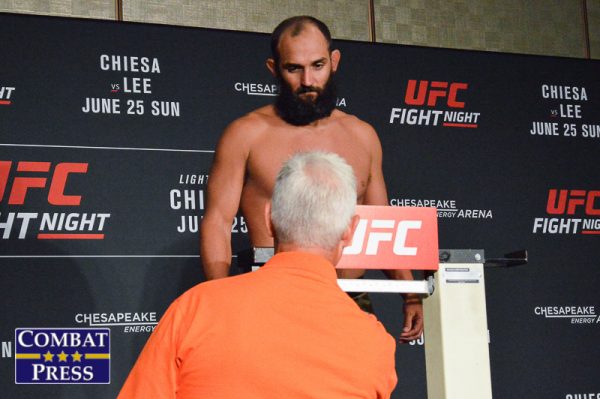 The UFC has now said goodbye to two former champions. Rashad Evans and Johny Hendricks announced their retirement from MMA on Monday and Wednesday, respectively.

Hendricks, the former welterweight champion, told MMAJunkie Radio that he will be transitioning to a career as a high school wrestling coach. He was previously a two-time NCAA Division I champion in the sport.

“I am getting out of the MMA world,” said Hendricks. “I’ve been thinking about this long and hard for a while. I’m gonna get back to my roots and I’m going to start coaching at All Saints.”

Hendricks does not expect to return unless the price is right.

“For 20 years of my life, I’ve been at the grind of mental, physical, trying to keep yourself in tip-top shape, and you know what, what I’m doing right now is, I’m training some of the guys at my gym, and I’m gonna miss sparring and stuff like that,” Hendricks said. “But since I’m training guys, I spar with them twice a month, so I still get sparring, I still get to work hands — I still get to do things that I enjoy. It’s like the best of both worlds for me.”

Hendricks exits the sport with a final record of 18-8 overall, including a 13-8 mark in the UFC. The 34-year-old captured the vacant welterweight championship at UFC 171 against Robbie Lawler in March 2014. The Oklahoman then lost the belt in a rematch with Lawler at UFC 181 that December.

After back-to-back weight misses in his 2016 bouts at UFCs 200 and 207, Hendricks moved up to middleweight, where he topped Hector Lombard the following February. His final fight came against Paulo Costa at UFC 217 in November. It ended in another loss for Hendricks, making him 1-2 in the 185-pound division.

Meanwhile, the future remains unknown for Evans, a former UFC light heavyweight kingpin. He has been working as an analyst for Fox Sports. UFC President Dana White alluded to a private conversation with “Suga’” about retirement at UFC 225’s post-fight press conference in Chicago earlier this month.

The 38-year-old former light heavyweight champ fell to Anthony Smith by knockout at UFC 225 to log his fifth consecutive defeat. Evans went 2-7 in nine contests dating back to his 2012 loss to Jon Jones for the title.

The Ultimate Fighter 2 winner initially knocked out Forrest Griffin at UFC 92 in 2008 to capture the strap. He was then finished by Lyoto Machida in his next Octagon appearance at UFC 98 in mid-2009.

“I’m gonna retire,” Evans said on the first edition of Ariel Helwani’s MMA Show from ESPN on Monday. “There’s just so much that goes into it all, but at one point in my life, I felt as if fighting was everything. It was everything. I put life second, but now life is taking over and now fighting has become second.

“Competing in a sport like mixed martial arts, where you have a lot of guys who haven’t been to the top of the mountain and haven’t experienced it, the things that I’ve experienced, they’re really hungry for it.”

Evans retires with a 24-8-1 record overall and a 14-8-1 mark in the UFC. Watch the full announcement of his retirement below.