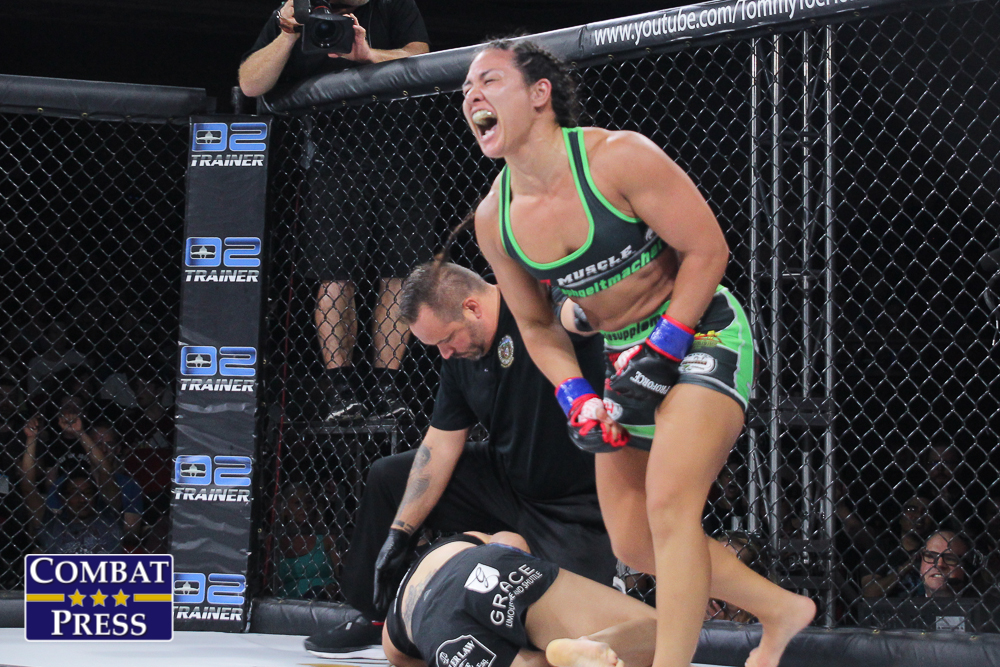 Let’s examine the women’s flyweight division, a weight class that was just added to the UFC. It’s been recently inhabited by fighters leaving the strawweight and bantamweight divisions, but it could easily add even more depth by including existing flyweights from outside of the promotion.

Kazakhstan is slowly emerging as a source of talented fighters. One of these fighters is Agapova. She represents the underrated Akhmat Fight Club, which has churned out some very strong fighters.

Agapova started off her career fighting no-names, which had her on the path of a can-crusher. However, in her last two fights, she has fought some reputable veterans and won impressively, which shot her up the prospect rankings. She is a good close-quarters fighter with strong takedowns and a heavy top position, where she secures submissions and throws heavy ground-and-pound. Her biggest wins came over Lily Kazak and Na Liang.

Agapova probably has some more work to do before the UFC throws her a contract, so she needs to have a busier 2019 after fighting just once in 2018. There are also more recognizable names that will likely get picked first, so she needs to score more notable victories. Her occasional appearances for the Fight Nights Global organization work in her favor when it comes to getting noticed by the UFC.

Brazil is the source of many of today’s best women prospects. Gatto is among the standouts of this group. The 22-year-old is a young gun who is quickly racking up big wins and pushing herself closer and closer to the big leagues.

Gatto has fought at bantamweight, but her proper weight class is flyweight. She’s a skilled submission grappler who has picked up all of her finishes by way of tapout. She was 3-0-1 in 2018, with her biggest win coming by kimura over featherweight Karol Rosa. The Rosa win was definitive proof that Gatto is ready for the big show.

Gatto’s willingness to fight outside of her weight class and score victories is definitely a big plus, as the UFC likes flexibility. With the company down in Brazil a lot, it would be hard to justify passing on Gatto.

If there’s one fighter that we hold in the highest regard as a prospect right now, it has to be the Hawaiian-born Geltmacher. She burst onto the scene in 2018 to quickly establish herself as a flyweight who will be a tough out for any opponent. She’s a future title contender.

Geltmacher wrestled collegiately, which explains her style in the cage. She has aggressive, powerful takedowns that she uses to dominate opponents. She also has solid positional grappling and submissions, which makes her ever more dangerous on the ground. At 5-foot-1 and undersized for a flyweight, she’s probably better suited for the strawweight division. Geltmacher went 2-0 in 2017 and repeated this same mark in 2018, a year in which she won both of her fights in Invicta over the likes of veterans Kerri Kenneson and Liz Tracy.

The 28-year-old is proof that amateur wrestling for women’s MMA fighters is the best background to have. If Geltmacher continues to blow through opponents, it’s gonna be hard to keep her out of the UFC. She’s likely on the company’s radar already.

Every year, we try to include at least one true dark-horse pick among the many prospects featured in this series. This year, the dark horse is Procopio, an undefeated 23-year-old Brazilian fighter who represents the Nova União camp.

She may be a tad undersized for flyweight, but Procopio has not let that bother her in her young career so far. The ground fighter has won all of her fights in convincing fashion, which includes three finishes and three clear-cut decisions. Her last three fights have all come against reputable talent, including Mayra Cantuaria, Invicta vet Mariana Morais and Sidy Rocha.

Procopio has plenty of time to catch the UFC’s eye. However, given her camp and her increasingly impressive resume, she should already be on the UFC’s radar. If Procopio keeps the ship on its current course, then expect her to be wearing UFC Reebok gear in the near future.

An undefeated record in MMA is always a feather in a fighter’s cap, especially when it includes good opposition. Walker-Sanchez represents this type of fighter. The 6-0 Guam resident continues to rack up wins in this crazy sport.

A well-rounded fighter, Walker-Sanchez has solid striking and a good ground game. She doesn’t exactly stand out as great in either regard, but she can compete using either of these skills. The big knock on Walker-Sanchez is that she doesn’t finish fights. Through six pro scraps, all of her fights have gone to decision. Sanchez had a successful 2018, scoring two wins in Invicta over the likes of formerly undefeated fighters Cheri Muraski and Miranda Maverick. These wins are proof that she can compete with talented fighters. However, both wins were split decisions.

The recipe for Walker-Sanchez consists of continued finishes with an organization like Invicta. She’s obviously great, but the UFC prefers finishers. On the men’s side, Andre Harrison was at one point undefeated through 20 fights and yet still resided outside the UFC. Finishes are important. Walker-Sanchez, like Harrison, remains undefeated with mostly decisions. If she can get one or two stoppages in her next few fights, then the UFC might make a move.