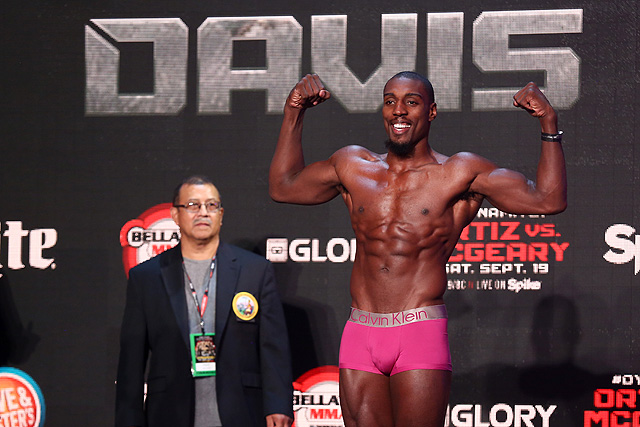 On Friday, Nov. 4, Bellator MMA will host its 163rd event from the Mohegan Sun Arena in Uncasville, Conn.

In the night’s main event, light heavyweight champion Liam McGeary puts his belt on the line against UFC veteran Phil Davis. The 34-year-old McGeary has yet to taste defeat in his 11-fight career. The lengthy Brit was last in action at Bellator 142 last September, where he submitted former UFC titleholder Tito Ortiz via inverted triangle choke. Davis, meanwhile, has won three straight since joining the promotion. After winning back-to-back fights over Emanuel Newton and Francis Carmont at Bellator 142, he edged Muhammed “King Mo” Lawal on the scorecards in May.

The action kicks off on Friday at 6:50 p.m. ET with a live preliminary card stream on Combat Press. The night’s main card airs live on Spike TV beginning at 9 p.m. ET.

The fighters hit the scales at 5 p.m. ET on Thursday, Nov. 3. A live video stream (courtesy of Bellator MMA) appears above, while the results appear below.

* – The bout between Coenen and Nogueira was canceled after Nogueira missed weight by 5.6 pounds.