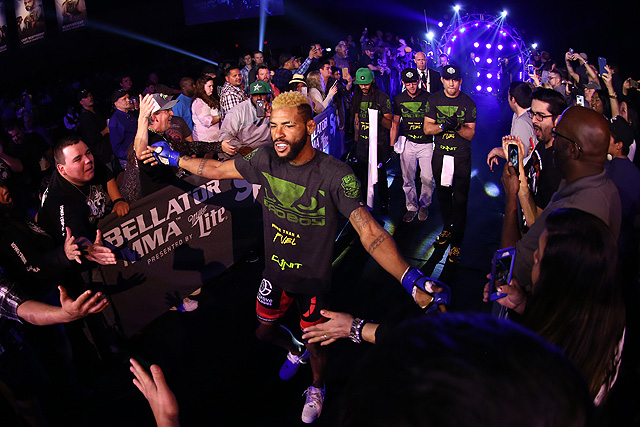 Bellator 159’s Darrion Caldwell: ‘I Think I’m the Best In the World’

Few fighters have made an impact in their organization as fast as Darrion Caldwell made his impact in Bellator MMA. If you don’t believe that, maybe you should ask Joe Warren.

The self-proclaimed “Baddest Man on the Planet” and former Bellator bantamweight champion was just getting back on track with an impressive victory over L.C. Davis last year. Warren was setting his sights on regaining the title. But “The Wolf” had other ideas, and Caldwell made those ideas known rather spectacularly with a first-round submission victory over Warren at Bellator 151 in March.

Speaking of getting paid, Caldwell recently inked a seven-fight extension with Bellator and firmly believes in the organization’s philosophy of putting fighters first.

“It should be about the fighters, not the owners,” Caldwell said. “I have a teammate who fights in the UFC, and it isn’t right for them to only make $8,000 [to fight] and $8,000 [to win] to start. We’re the ones putting our bodies on the line. Bellator saw my talent, and them signing me has been a blessing. It’s my responsibility to prove them right, and I’m happy where I’m at, and they treat me well.”

Caldwell grew up surrounded by all kinds of sports, including fighting. It’s a natural byproduct of growing up in a competitive household with his brothers. From gymnastics to T-ball to football to college wrestling, it seemed like only a matter of time before Caldwell plied his trade in mixed martial arts.

“It kind of fell into my lap,” he said. “I watched guys compete, and it made me want to do it. I think I’m the best 135-pounder in the world, but I still have room to grow. I haven’t even scratched the surface, and my ambition for this sport is to be the best ever.”

Caldwell matches his drive to be the best with his never-ending desire to learn. He takes inspiration from many different sources. Caldwell recently visited a high school wrestling practice, where he said he picked up a few pointers. He also trained at Power MMA in Arizona for his fight against Warren. He learned how to handle a high-level wrestler like Warren by working with other wrestlers, including the UFC’s C.B. Dollaway and Ryan Bader.

“They have everything under one roof,” Caldwell said of Power MMA. “It’s a great gym, a great atmosphere and it’s very special. Joe [Warren] was a world-champion wrestler, but I was used to that after working with those guys.”

Caldwell returned to his regular gym, Pinnacle MMA in California, to prepare for his upcoming bout at Bellator 159 on Friday, July 22, against Joe Taimanglo, a veteran fighter who holds a 22-6-1 mark. Caldwell isn’t overlooking his opponent, but he is looking forward to receiving a title shot against current Bellator bantamweight champion Eduardo Dantas.

“There’s no killer instinct or ‘it’ factor with Dantas,” Caldwell said. “He folds under pressure.”

Caldwell would like to thank his parents, teammates at Power MMA and Pinnacle MMA and his sponsors: Bad Boy Brand, the Martin Advisory Group and American Ethanol. Follow Darrion on Twitter: @TheWolfMMA
Advertisement