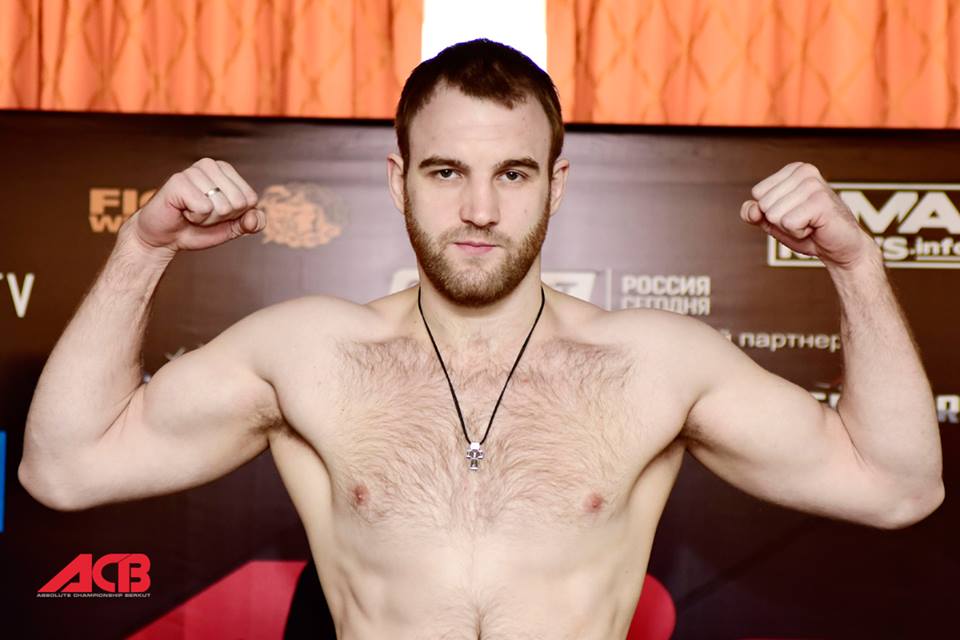 Fight Club Berkut returns to Sochi, Russia, on Friday, July 15, for Absolute Championship Berkut 41: The Path to Triumph. The promotion is returning to Sochi for the first time in over a year.

The trip back to the home of the 2014 Winter Olympics features a rare commodity in MMA, a young heavyweight prospect. The 26-year-old Denis Goltsov has put together a strong resume with 17 wins and just four defeats fighting against many of the best heavyweights competing in Europe. Goltsov is riding a 12-fight winning streak that features victories over seven UFC, Bellator and Strikeforce veterans.

The 6-foot-6 Russian heavyweight looks for his 13th straight victory against another fighter riding a streak of success. Former UFC title challenger Paul Buentello has won two straight and six of his past seven in a stretch that spans nearly four years. “The Headhunter” finished five of those six victories to bring his career knockout total to 22 in his 35 professional wins over the course of a nearly 20-year career.

In the evening’s co-main event, prospects collide when blue-chip bantamweight Petr Yan attempts to return to the win column against former BAMMA champ Ed Arthur. Yan fell short in his bid for the ACB bantamweight title in his only career loss when Russian super-prospect Magomed Magomedov earned a split decision victory after a ”Fight of the Year” contender. Arthur won the BAMMA title when he choked out Alan Philpott. However, he couldn’t defend the belt in his next outing against Shay Walsh. This is a UFC-caliber contest under the ACB banner.

A welterweight contest between ProFC champion Ibragim Tibilov and Bellator veteran Guillermo Martinez Ayme highlights the remainder of the main card. Tibilov earned his title in his most recent outing against Ukrainian welterweight Maxim Shvets. “Cubano” fell short against Sergey Khandozhko in his ACB debut in late 2015.

ACB lightweight grand prix runner-up Eduard “Lionheart” Vartanyan takes on 27-year-old Brazilian prospect Márcio “Ceará” Breno in a lightweight contest. Vartanyan earned a victory over Bellator veteran Frodo Khasbulaev between his only two career losses, including his last bout, a knockout loss in the ACB lightweight championship against Abdul-Aziz Abdulvakhabov. Astra Fight Team’s Breno is on an eight-fight winning streak as he makes his debut outside of his home country.

Multiple-time Altay tournament winner Sharaf Davlatmurodov wants to keep his record unblemished against UFC veteran Ben Alloway in a welterweight fight. Alloway has won four of his past five fights following his release from the UFC. He earned titles in BRACE and Eternal MMA during his most recent three-fight winning streak.

Russian lightweight prospect Alexandr Shabliy, 23, takes on BAMMA veteran Michael “Hawaii” Brightmon in both fighters’ ACB debuts. Shabliy has won six straight and 10 of his past 11 fights. Brightmon returned to the win column following the worst stretch of losses in his career.

The heavyweights round out the main card. UFC veteran Tim Hague makes his ACB debut following a fourth-round knockout of Kalib Starnes to win the Xcessive Force heavyweight title. Hague fights 24-year-old Polish heavyweight prospect Michał Andryszak, who has won four of his past five fights. “Longer” finished as the runner-up in the 2015 ACB heavyweight grand prix against Salimgerey Rasulov.

Goltsov, 26, has proven himself as one of the best young heavyweights outside of the UFC. “The Russian Bogatyr” has spent time in many of Russia’s top promotions. He’s fought top competition in the form of former Bellator heavyweight champion Alexander Volkov, UFC veterans Konstantin Erokhin, Mike Kyle and James McSweeney, and Bellator veterans Brett Rogers, John Hawk and Peter Graham.

Goltsov uses his aggressive striking style to get inside and get his opponents to the mat. He is a risk-averse grappler who will dive on a mounted triangle just as quickly as a rear-naked choke. Goltsov’s striking has continued to improve as he’s taken on stronger competition during his lengthy winning streak. He still has his deficiencies, though, like being too aggressive in the grappling exchanges.

Buentello has had many ups and downs in his career, but his recent trend of wins at the age of 42 has been his best streak since a stretch of six victoriess from 2006-09 following his lightning-quick UFC title challenge loss to Andrei Arlovski at UFC 55. Buentello has victories over UFC veterans Rameau Thierry Sokoudjou and James McSweeney and Bellator vet Eric Prindle in three of his past four fights. His lone defeat in his past seven fights was at the hands of Myron Dennis by split decision for the vacant Legacy FC heavyweight title.

Buentello has power in his punches, as evidenced by his 22 career knockout victories. He showcased his punching power in his most recent outing at Abu Dhabi Warriors 4 when he temporarily face-planted the aforementioned Prindle in 64 seconds.

Buentello will be in serious trouble if he lets Goltsov dictate the pace and positioning on the mat. Goltsov is skilled off of his back with submissions and sweeps. He showcased his excellent sweeps when he immediately turned a Mike Kyle takedown into an advantageous position and eventual mounted triangle-choke finish. Buentello may find himself in trouble on the feet if he lets the lanky Russian land his quick, powerful strikes.

This fight was made to test the ability of the young prospect, and Goltsov will answer this test by scoring his fourth win over a UFC veteran. The fight most likely ends with a Goltsov submission, but don’t rule out a knockout victory from the ever-improving heavyweight.