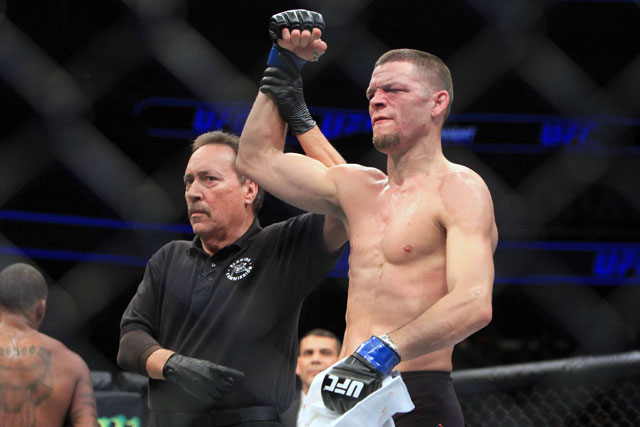 It’s time to pump the brakes on the hype train, as featherweight champion Conor McGregor was submitted by Nate Diaz is the night’s main event. McGregor started well, repeatedly landing his left hand. A large cut opened over the right eye of Diaz from the frequent shots. Diaz secured a takedown late in round one, but the bell prevented him from doing anything with it. McGregor was aggressive to open round two, but Diaz found his range and timing. Diaz began landing with his hands and McGregor was wobbled badly. The Irishman shot for a takedown, but Diaz reversed the position and gained the mount. Diaz took his back and slapped on a fight-finishing rear-naked choke late in round two.

Former Strikeforce titleholder Miesha Tate cashed in on her second UFC title shot, submitting Holly Holm with a fifth-round rear-naked choke. Holm controlled range early, showcasing her striking prowess. Tate had a huge second round as she earned a takedown and took Holm’s back. She worked hard for a rear-naked choke, but Holm defended to survive the round. Holm’s striking was the story in the third and fourth rounds as she repeatedly stuffed Tate’s takedown attempts and scored with combinations. Holm was controlling the final round, but Tate managed to drag her to the mat and take her back. Holm tried to stand and then dump Tate on her head, but Tate got her arm under Holm’s chin. Holm tried to fight the choke, but went to sleep, handing Tate the championship.

Sweden’s Ilir Latifi earned another Octagon win with a decision nod over Gian Villante. The fight was a slow-paced, grinding affair. Villante scored with body kicks throughout, but Latifi frequently looked for takedowns along the fence. Latifi was able to drag Villante to the mat multiple times, but rarely held him down for long. They exchanged single shots throughout, with Latifi briefly rocking Villante late in round three. The fight went the distance, with Latifi earning every round on every scorecard.

Light heavyweight Corey Anderson survived an early barrage from opponent Tom Lawlor to come back and claim a decision win. Lawlor rocked Anderson early with a flurry along the fence, but Anderson remained calm. Anderson picked up his striking output in rounds two and three. A well-timed takedown in the final round sealed the fight for Anderson.

Brazil’s Amanda Nunes took home a unanimous decision win over Valentina Shevchenko to kick off the night’s main card. The first round was a feeling out process for both women, but Nunes earned a trip takedown to claim the frame. In round two, Nunes again took Shevchenko to the ground and began to open up with heavy ground and pound. A series of elbows opened up big cuts on the face on Shevchenko. Nunes took her back late in the stanza, but could not find the rear-naked choke finish. Shevchenko went for broke in the final round, repeatedly scoring with knees. Nunes survived to capture the win.

Returning from nearly three years away from the cage, Afghan native Siyar Bahadurzada scored a big win over Brandon Thatch. Thatch threw kick after kick to start the fight, but when he decided to take Bahadurzada to the mat, things fell apart. Bahadurzada was able to sweep to the top position and Thatch was unable to get up. Despite landing some heavy strikes in round two, Thatch again found himself underneath Bahadurzada. It was more of the same in round three, but Bahadurzada was able to score a finish via arm-triangle choke.

After a tentative first round from both fighters, Nordine Taleb put away Brazil’s Erick Silva with a vicious, second-round knockout. The pair exchanged single shots throughout much of the first round, including a fake fist bump, left hook from Silva that drew the ire of the crowd. Taleb exacted revenge in round two, catching a kick and delivering a right straight that sent an unconscious Silva crashing to the mat face first.

Brazilian Vitor Miranda survived the grappling onslaught of countryman Marcelo Guimaraes to earn a violent, second-round finish. Miranda was active with his strikes, but Guimaraes closed the distance and pinned him against the fence for most of the first round. It appeared that the second round would be a repeat of the first, but Miranda landed a series of elbows to the head of Guimaraes as he sought a takedown. A wobbled Guimaraes ate a big head kick from Miranda and after a handful punches, the referee was stepped in to halt the onslaught.

In the first televised fight of the night, featherweight Darren Elkins simply outworked and outclassed Chas Skelly for a clear-cut decision win. The pair traded heavy shots in the first round, with Skelly getting the better of the exchange. Elkins responded with a takedown and defended a heel hook from Skelly. Then Elkins took over. He repeatedly took Skelly down and pounded away with punches and elbows from the top position. Skelly faded as the fight progressed, allowing Elkins to cruise to victory.

Veteran lightweight Diego Sanchez and Jim Miller battled back and forth for three rounds, with Sanchez walking away with a unanimous decision victory. Miller landed with his hands in the opening stanza, but Sanchez earned a takedown and showcased strong top control. The tables turned in round two as Miller pressured Sanchez and scored with big knees along the fence. Sanchez came back strong in the final frame, capturing the win on all three scorecards.

Following a lengthy layoff due to a torn Achilles tendon, Canadian Jason Saggo returned to pound out fellow lightweight Justin Salas in the first round. Saggo attacked with kicks, allowing Salas to earn a takedown. Saggo swept to the top position with an omoplata attempt. He then transitioned to the back of Salas and forced the stoppage with ground and pound.

Japan’s Teruto Ishihara used a diverse kicking arsenal and aggressive pace to overcome the reach of Julian Erosa. After a strong opening frame, Ishihara countered a flurry from Erosa early in round two, landing a massive left hand. Erosa crashed to the canvas and Ishihara put him out for good on the ground with punches.