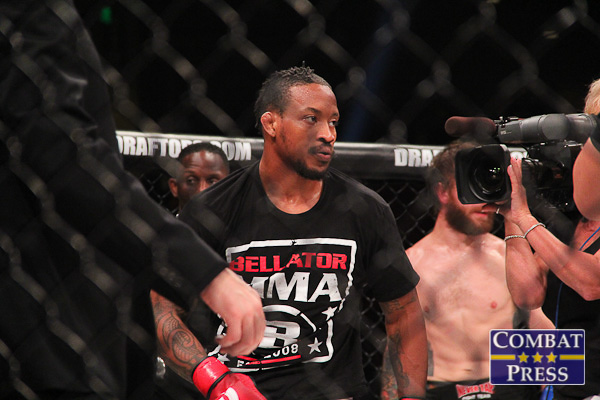 Bellator 151’s Bubba Jenkins: ‘I Plan on Holding the Belt’

On Friday, some of the greatest collegiate wrestlers are gathering. No, it’s not for a wrestling tournament. It’s for an MMA event.

It’s time for Bubba Jenkins, one of those former wrestlers, to make a statement in a crowded and stacked Bellator featherweight division. The division is filled with names like current champion Daniel Straus, top contender Patricio Freire and up-and-comers like Emmanuel Sanchez. If a fighter isn’t winning consecutive fights in this weight class, they’ll find themselves further from a title shot than in any other division that Bellator offers. No pressure, right?

“There’s a little pressure in this fight, but nothing I’m not used to when I wrestled in college in the toughest weight class of all time with [Darrion] Caldwell, [Lance] Palmer and a couple other big names in the sport of wrestling,” Jenkins told Combat Press. “Every week we had top-10 wrestlers in the country coming to visit me or I was going to visit them. That pressure got me ready for this. I’ve always been one that performed well under pressure. With it being a stacked division, everyone’s claiming themselves to be sharks, so I just want to make sure that I’m a shark that’s swimming in the deep end where all the other sharks are and not just someone that’s in foreign waters.”

The shark that Jenkins will be clashing with at Bellator 151 is 23-year-old fighter Goiti Yamauchi, who holds a 19-2 record. Yamauchi is riding the momentum, carrying a three-fight winning streak into the contest, with his last outing coming at Bellator 144 when he submitted Isao Kobayashi. Yamauchi is well rounded, but his greatest attribute, and for lack of a better word, is his “sick” ground game. The Brazilian Jiu-Jitsu black belt has a dangerous guard. Make one mistake and it’s going to be followed up by a tap and a loss.

“I’m confident everywhere,” said Jenkins. “Wherever he wants to go, I’m fine with it. I don’t think that anyone has hit him hard enough to stop him from trying to submit. There’re people who have been in submissions and kinda worked their way out of it, but I’m one of those guys who punches themselves out of submissions. I’m dominant and strong in those types of areas. If you’re not becoming well rounded in mixed martial arts, then, yeah, there’s places you’re afraid to go. But because I’m confident in my coaches and training partners, I’m confident in wherever he wants to take it.”

Jenkins has worked on being a complete martial artist since making his pro debut in 2011. His improvements since his last loss to Georgi Karakhanyan have been noticeable.

“I haven’t even scratched the surface yet,” Jenkins said. “I’ve been getting away with wins and dominating people because of my athleticism and my wrestling background. I’m not yet the mixed martial artist that I’m still becoming. I’m basically in the mature stages of stand-up and striking, and cage movement, awareness and things like that. When I become the fighter that everyone else is expecting me to become, then the game is going to be in trouble. When I can strike like I can wrestle [and] when I can defend like I can be on the attack, then I don’t see too many guys in Bellator being able to hang with me for more than two rounds.”

The rest of 2016 is already lined up for Jenkins. He expects it to end with a bit of style.

“I plan on holding the belt while opening my Christmas presents,” said the confident fighter. “I plan to be wearing a robe for Christmas morning, with a cup of hot coffee and a belt — the Bellator 145-pound belt — around my waist while opening gifts. That is the game plan.”