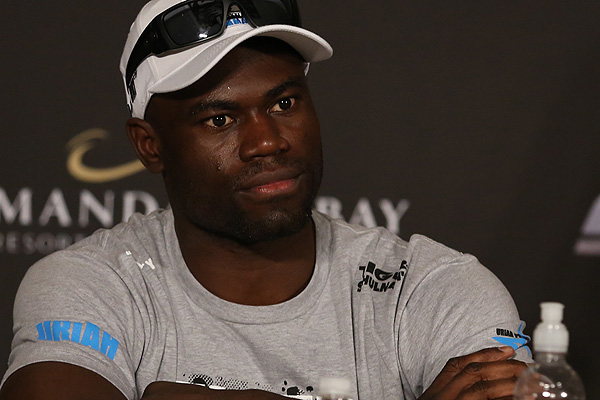 When you hear the name Uriah Hall, there’s little doubt the image of him destroying Adam Cella with a spinning kick during season 17 of The Ultimate Fighter is what pops into your head. Throughout the season, he was the foundation of the marketing plan to attract viewers, which is pretty phenomenal considering the coaches were Jon Jones and Chael Sonnen. The dialogue between Jones and Sonnen was nearly non-existent and it didn’t bring the excitement fans were hoping for. Thankfully, for the UFC, it had a devastating knockout from Hall to replay over and over again to try to salvage the ratings.

Hall, 31, is built like an action figure, but that physique is rarely a sure sign that a fighter is going to have a successful UFC career. Following Hall’s highlight-reel knockout during The Ultimate Fighter, things pretty much went downhill. He lost in the season finale to Kelvin Gastelum, who has turned out to be pretty damn good, and then faltered in his next fight against John Howard. Right off the bat, people were thinking he was overrated and perhaps his bulky look was nothing more than a cover-up for subpar fighting skills. However, following those two losses out of the gate, Hall has rebounded and won four of his last five. His latest fight against Oluwale Bamgbose was a furious onslaught that got fans to thinking maybe he really is that firework in the Octagon we all expected.

There are a couple of different ways to impress UFC President Dana White and the rest of the UFC brass. For one, of course, you need to win. Second, you need to be exciting. Finally, you need to take fights on short notice. If you’re a fighter and can combine all three of those traits — and not say anything anti-Reebok — then you’re in for a long career inside the Octagon. Hall is on the right track with an explosive arsenal of offense at his disposal, coupled with recent success, and is now stepping in to take another fight on short notice as a fill-in for Roan Carneiro. Hall will now face No. 6-ranked UFC middleweight Gegard Mousasi. Mousasi is unlike anybody Hall has encountered thus far, but the mere fact that he is going to take the fight and compete less than two months after his last fight is a sign that Hall “gets it.” That wasn’t necessarily the case with him early on in his UFC career.

A fight against Mousasi is a no-lose situation for Hall. He has so much to gain by beating the former Strikeforce and Dream champion, but he has nothing to lose. Why? Well, most fighters that fill in and take a fight on short notice are given a free pass by fans and the UFC if they lose, especially to somebody of Mousasi’s caliber. If Hall were to beat Mousasi, it would absolutely mark his “arrival” in the UFC. For somebody who was heading into UFC 168 needing a win to keep his UFC contract, that’s quite a contrast in a relatively short amount of time. Hall’s active schedule — this will be his fourth fight of 2015 — is doing nothing but good things for him. It’s apparent he is doing everything he can to be in the good graces of the UFC, but he needs to be careful to not try to do too much in such a short amount of time.

The Donald Cerrones of the world are rare. The “Cowboy” can seemingly take fight after fight as a late replacement and post win after win, but there’s a reason why it’s a risk to take fights on short notice. Injury and gatekeeper status are two potential outcomes for taking on too many fights. Clay Guida comes to mind as someone who was always ready to fight no matter how banged up he might have been coming off his last fight. He romped in more than 20 fights over three years as he was making his way to the UFC. Those habits continued during the early part of his Octagon career, albeit at a slower pace, but he just couldn’t get over the hump and win the big fights to propel him to the next level. Hall needs to take note of this danger. He needs to be smart about the fights he’s willing to take on short notice. Only time will tell if this one against Mousasi is going to prove to be beneficial for him.

Has Hall become the contender the UFC was hoping for? It’s tough to say for certain, but I’d still say no. He’s already on the wrong side of 30 years old and has a 4-3 UFC record with none of the wins coming over a fighter that could be considered a big-time opponent. However, if he can somehow beat up on Mousasi, then he’ll catapult himself into the middleweight title picture and should get another big name to fight in early 2016. Again, a loss won’t put Hall’s job in jeopardy since he’s filling in for an injured fighter, but it won’t get him any closer to the top 10 either. With a win, though, Hall can establish himself as the promising contender the UFC was hoping he’d be when that spinning kick landed upside Cella’s head.