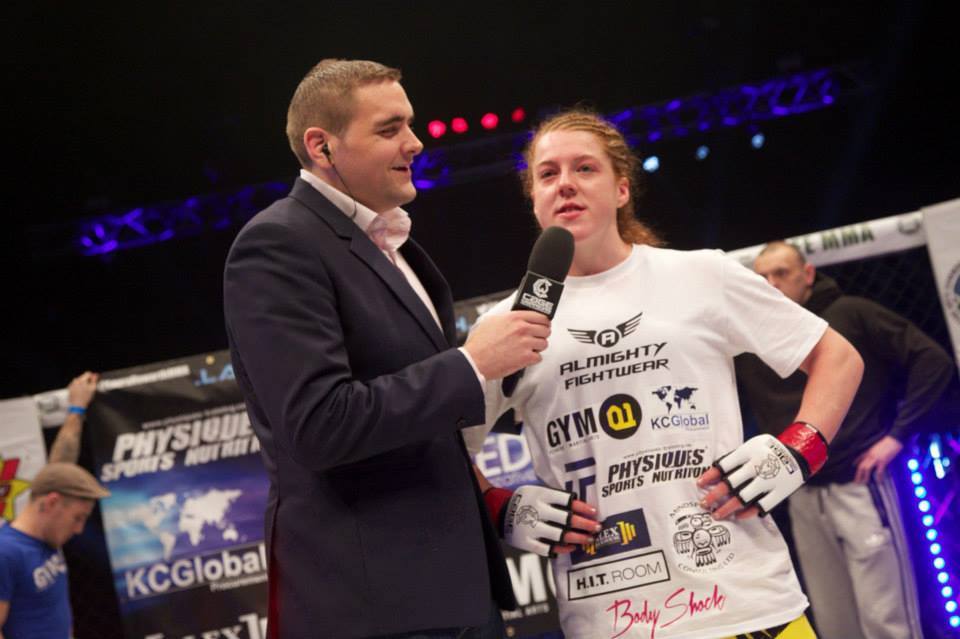 Kids have the best memories. When your five-year-old gets something in his or her head, it’s next to impossible to get them thinking about something else. Until they go to sleep. But if it’s something they latch onto, forget about it. Not sleep, not a trip to Disney World, nothing can keep them from asking for their heart’s desire. And they are the best salespeople in the world.

It’s a rare person, though, who can keep that determination and single-mindedness her entire life. And it’s what is demanded of those who would be world champions.

At age 5, Laura Howarth decided she wanted to take karate. She doesn’t quite remember why she was drawn to the sport, but she knew she had to take classes. But her parents didn’t give in right away. Howarth had to wait three whole years (and for an 8-year-old that is almost half her life).

“From day one, my first class, I remember falling in love with the sport,” Howarth told Combat Press.

Howarth stayed with the sport and earned her black belt at age 12. She kept training and went undefeated in K-1, going 6-0 and becoming the 65-kilogram ZT champion. She fought Muay Thai as well, but found the most success in K-1. Like so many skilled martial artists, Howarth found her way into an MMA gym and started training.

She continued her winning ways, going 4-0 as an amateur fighter. Of course, she scored a knockout, but it was from a kick to the body in the first round. Her fourth fight was won by submission, a rear-naked choke in the second round.

“I think [the experience at K-1 and kickboxing] has made me a better fighter — a more well-rounded fighter,” said Howarth. “I believe that my striking skills are better than most other females in my division, and all fights start on their feet so I have the advantage.”

After her fourth fight, Howarth traveled from England to Las Vegas to take part in The Ultimate Fighter 18 tryouts in August 2013. She drew Jessamyn Duke. They exchanged on the feet and Duke took advantage of her height and reach advantage. Wisely, Howarth initiated a clinch. They worked against the cage, trading shots and dominant positions, and Duke scored a takedown. Howarth was able to sweep and end up on top, but Duke’s guard is dangerous. Those long legs and arms kept Howarth at bay while allowing Duke to attempt all kinds of submissions. Eventually, one of those submissions stuck.

Howarth tapped at 3:50 of the first round due to a triangle choke. It was, up until then, the biggest fight of her career. It was also her first loss as a fighter. Some folks — some less-determined folks — might take that loss as a sign that it was not meant to be. Not Howarth. She took the opportunity to learn all that she could.

“Vegas was awesome. I wanted to test myself as I wasn’t able to get fights in the UK. So that’s what I did. It opened up doors for me and got my name out there more. I learned so much from my fight with Jessamyn,” said Howarth. “I learnt I needed to move gyms to one that would be able to take me through to my professional career. I learnt that I had the skills to turn pro that needed fine-tuning. And, finally, I learnt what it felt like to lose, and I never wanted to feel that again.”

So Howarth does strength and conditioning with Alex Backhouse and does the majority of her MMA training at Gym01.

“Alex is awesome at what he does and has so much knowledge. I learn something new every session,” said Howarth. “And Gym01, well, that’s my base, my hub. I pretty much live there. I train under Brian Adams, the head coach for MMA, Gareth Johnson [K-1 kickboxing coach] and Colin Howells [Brazilian Jiu-Jitsu coach]. With these all combined, I am sharpening my skills immensely.

“I do like to go train other places with different training partners and different takes on things. I’ve also trained with Jack Magee and Jess Liaudin. I also train with the top guys and girls in the country. Brett Caswell, the No. 1 unsigned flyweight in Europe, [and] James Brum, another top prospect, and Jade Barker, [who] just turned pro and has some crazy skills.

“I went to the U.S. last year on two occasions. I trained at SFS Gym in Michigan under James Gray, a wizard on the mats. I also spent a week training in Vegas with Roxanne Modafferi, which again was awesome. I learnt a lot from training away from home and, again, it’s added another angle to my game.”

Howarth came back home after the loss to Duke. She went pro in December 2013, won via split decision and took another fight, which she won by unanimous decision, in February 2014.

Since the TUF tryouts are considered exhibitions, her next fight would be her first official loss. In August 2014, Lina Akhtar Lansberg was able to score so much damage that Howarth was unable to answer the bell for the second round. She didn’t like that feeling very much.

Since then, she has been training full-time during the week. Howarth also works on the weekends, taking care of adults with learning disabilities like autism.

“It’s fun and rewarding but very hard work at times,” she said.

Fighters sacrifice their bodies, training to the point of exhaustion. Building muscle means ripping it first, feeding it the healthiest of foods while eschewing the tasty foods high in fat and salt, and sacrificing party time for rest. All for what? To compete, of course. To compete at the highest levels, in promotions like the UFC, Invicta FC and Bellator.

“Fighting for Invicta FC 16 would be the best,” said Howarth. “Kelly McGill has been announced for the March 11th card, so that’s who I want to fight. She claims to be a jiu-jitsu fighter, and I am a stand-up fighter — what’s not to like about that match-up? It would be epic! I just want the chance to fight, though.

“I just want to fight in the next couple of months. If I am not picked for March, then definitely I would consider fighting for someone else. It’s for personal reasons that I want to fight in March, too. In December of last year, my father was diagnosed with pancreatic cancer, which is incurable. The doctors have told him he has less than a year to live. This was a massive shock to my family and me. He has set some goals that he wants to achieve, one of them being seeing me fighting on the big stage in America.

“If he is well enough, he would come out to watch. But if not, he will watch it on the screen. Either way, I really want to help him achieve that goal. This has made me more extremely focused, too. I have never been more ready to fight!

“In the end, I want to encourage and inspire. I want my niece and nephew to look up to me. I want my dad to be proud, more than anything! I want to be named as one of the best alongside other top females, like Tonya Evinger, Holly Holm and Joanna Jędrzejczyk.”

Howarth is Invicta’s only English fighter. The chance to represent her country would be a huge honor. She is ready to show the rest of the world her skills.

If there is anything we can learn from Howarth’s childhood, it is that she is willing to do what it takes to reach her goals. She won’t take no for an answer. She will continue to fight for her dreams, for her father’s dreams, and for the right to represent her country on the big stage.