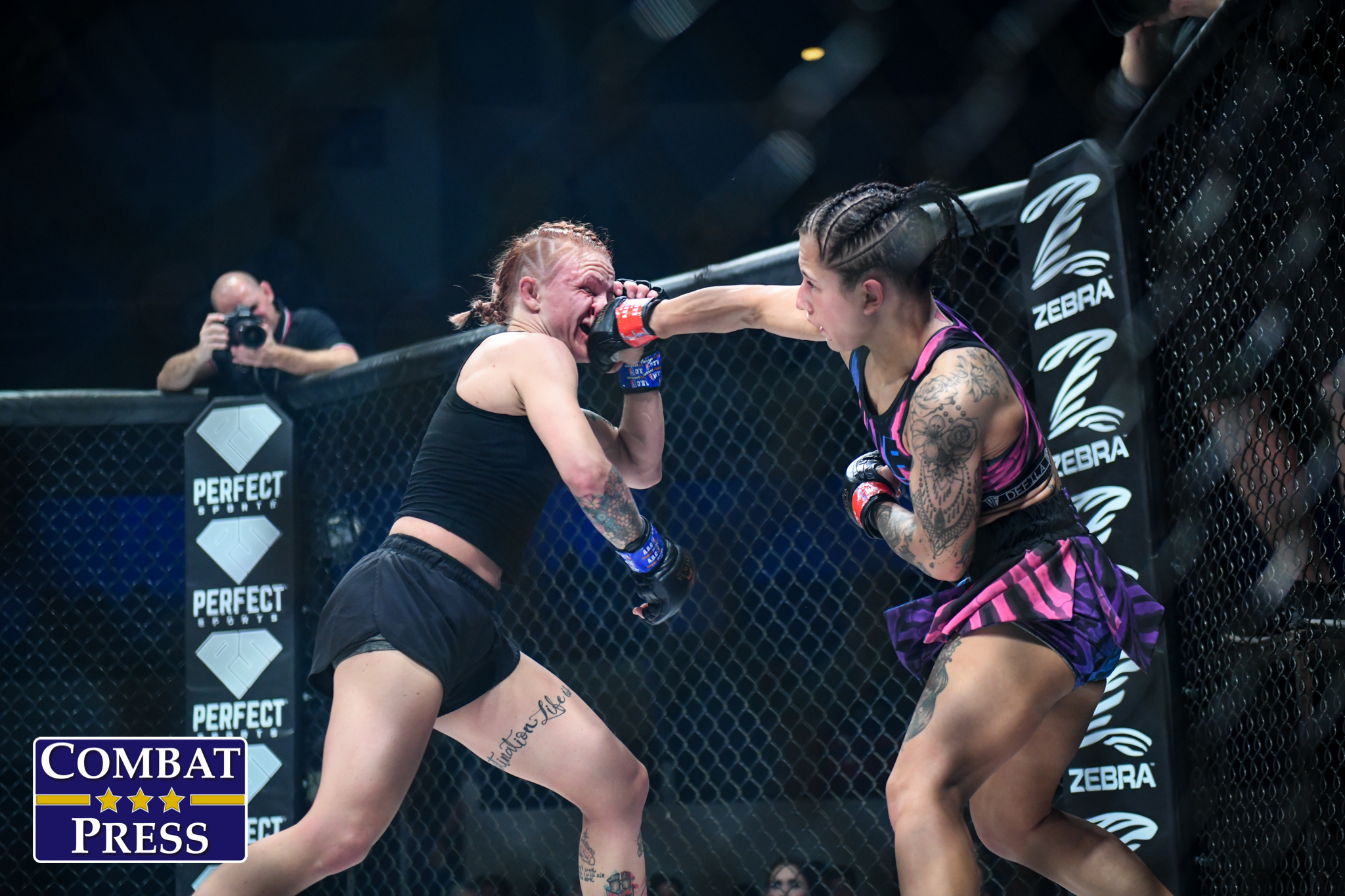 It’s strange to think that, at 24 years old, a professional athlete, especially an MMA fighter, could feel like her back is against the wall in terms of her career. However, in February, Alesha Zappitella was in that spot, and she was only seven fights into her pro career.

Zappitella made her pro debut in October 2016, when she was only 21 years old. In just over two years, she brought her undefeated record to five wins, with one no-contest, and was coming off back-to-back victories in the Invicta Fighting Championships cage.

After three rounds in which she was picked apart by the former strawweight, Zappitella dropped a decision for the first loss of her career. Only two months later, she headed over to Japan to take on Kanna Asakura at Rizin 18 and lost a controversial split decision, which easily could’ve gone her way. That was in August 2019. Her next battle came against Kelly D’Angelo at Invicta FC 39 in February.

“At that point, it kind of felt like my entire career was weighing on that fight,” Zappitella told Combat Press. “I have so much more to give to this sport. It was really just proving to myself how good I was and proving to everyone else that I’m still here, even after a hard loss where I showed my heart and that I can take a lot more of a beating than probably anyone else ever thought I could.

“Then [to suffer] a controversial loss — that one hurt my heart real bad. I had to go back and do some digging and find out who I really was. I feel like I won that fight, and it being taken away from me, it kind of changes a person.”

After three rounds with D’Angelo, Zappitella was back in the win column. Two defeats in a row was not a great experience, but it was experience nonetheless, and it allowed her to grow.

“I learned that I need to just wrestle more,” said the atomweight fighter. “I need to trust exactly what I know how to do. I need to go into the cage, and if I just push my game on people, there is no way they can keep up.

“I feel pretty proud of my career. I think that I was thrown in the deep end pretty quickly in my career, but it was either sink or swim. I swam.”

Zappitella may be young for an MMA fighter, but she has had a lifetime of experience on her side. She was given a choice at a very young age, and combat sports turned out to be her calling.

“I’ve been doing this stuff for 20 years now,” Zappitella said. “I started wrestling when I was five. My parents actually put me into dance and wrestling at the same time, and I chose wrestling. I went to college for wrestling, and I figured out that college wasn’t really for me. I remember watching women fighting on TV, and thinking, ‘I can do that. If these women had some wrestling, they’d be so much better.’ From the first practice I stepped into in martial arts, I was hooked.”

The Michigan resident now trains out of Scorpion Fighting Systems under head coach James Gray. She also has the expertise of many other high-level coaches, such as Brian Fornasiero and Tim Farr, at her disposal. Zappitella is always ready to go, but she is currently on the tail end of the longest fight camp of her career. About a month after her last fight, the coronavirus (COVID-19) pandemic started shutting things down, and a lot of fighters’ careers took an unexpected long pause.

“At my day job — I worked in an elementary school — we were told we were being shut down,” Zappitella explained. “When that happened, I realized things were serious, but I was really happy, because I thought I would just get to train like a professional fighter and get ready for my next fight. And then gyms got closed, and I was really wanting to have another fight before the summer. This way, I could just take time [for] myself and go travel and do seminars. I really thought this was going to put a damper on everything, but the second my coach opened the gym, I was back in there training four times a day.”

Then, Zappitella received a call from Invicta President and CEO Shannon Knapp. The show was back on, and “Half Pint” was set to finally get into the cage again. Her upcoming opponent is Lindsey VanZandt, whom Zappitella meets on July 2 at Memorial Hall in Kansas City, Kan. The contest serves as the night’s co-headliner, and it is a title contention bout.

“I’ve actually known about this fight for quite a while now,” Zappitella admitted. “We were waiting on the OK from the state and waiting for the date the show was actually going to be on, because it got pushed back from its original date. I’ve been in about a 10-week fight camp. Honestly, I would have to say, though, this whole COVID craziness has done me more good than it’s done me bad.”

On June 22, after her next bout was already set, Zappitella found out that then-Invicta atomweight champ Jinh Yu Frey was called up to face fellow Invicta alum Kay Hansen in the strawweight division at UFC on ESPN 12. This resulted in an opening at the top of Invicta’s lightest division. It was a bit bittersweet from a timing perspective, but still good for her overall.

“Well, this is definitely a contention fight — especially now that Jinh moved up to the UFC,” explained Zappitella. “Had she moved up to the UFC a little bit sooner, we probably could’ve pushed for this to be the actual title fight, but that’s OK.

“If she’s seen my fights, I capitalize on kicks. Obviously, my wrestling is much better. She can train as much as she wants, and she’s never going to catch up to my 20 years of wrestling. I think my jiu-jitsu is very underrated, and I don’t think she’s fought anybody who mixes jiu-jitsu and wrestling as much as I do. I think watching film is one thing, and I think getting in there and fighting against me is a completely different thing.”

Zappitella is still early in her career, but she is making big waves. On Thursday night, in a fight that airs live on UFC Fight Pass, she will have the chance to show why she deserves a title shot before her 26th birthday. Van Zandt is no pushover, but Zappitella is certainly ready to prove that she’s the future of the atomweight division.

“I actually took this time of COVID to go on a vision quest,” Zappitella said. “I’m trying to rewrite and define who I am and find my purpose in life. I want people to know that I took the last few months to evolve as a fighter and a person. When they see me step into that cage, they are going to see somebody they have never seen before. I’m the happiest I have ever been, and I love this sport. That, in turn, means I will be more brutal than I have ever been.”