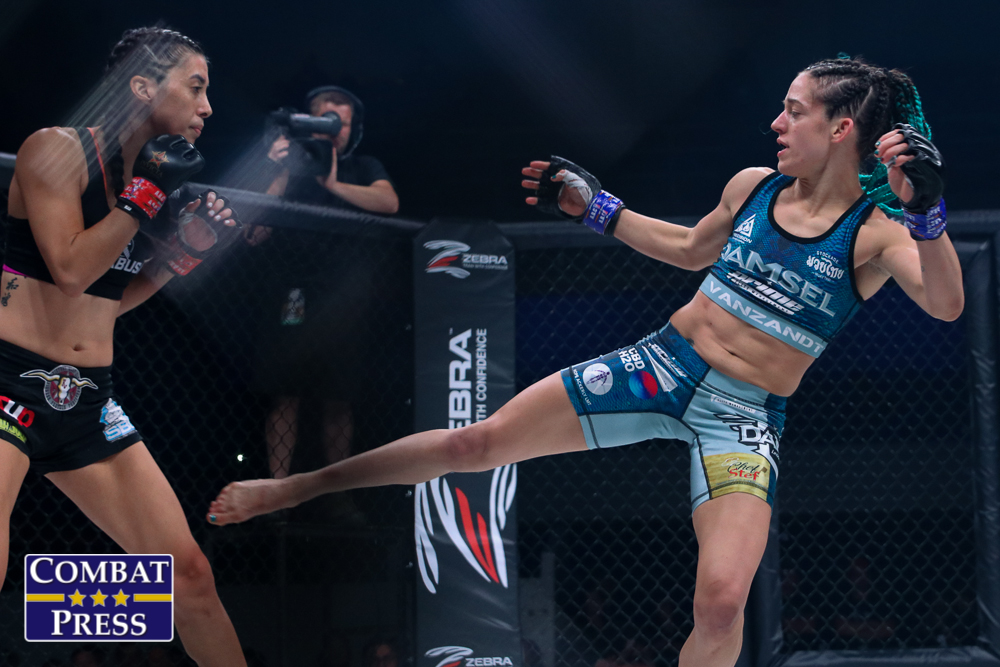 These names belong to the three previous Invicta Fighting Championships Phoenix Tournament winners. Two of the three now reside in the UFC. The other made a Dana White’s Contender Series appearance in her next fight after taking home the tourney title.

Now, Invicta embarks on yet another entry in its Phoenix Tournament. The winner is unlikely to reach the UFC unless she moves up in weight — the big show still unfortunately has no plans for a women’s atomweight division — but she could make a star turn for Invicta and earn a crack at the title belt that currently resides around the waist of Alesha Zappitella.

The field for this atomweight edition of the Phoenix Tournament features a wide array of experience and success among its eight members.

Thirteen-fight veteran Jéssica Delboni is the most experienced of the bunch. She holds a victory over former Invicta atomweight champ Herica Tiburcio in a strawweight contest. The Brazilian debuted in 2013 and has since won 10 fights, including two by knockout. However, she has fell short in encounters with the aforementioned Zappitella and Invicta contender Ashley Cummins.

Combat Press contributor Jillian DeCoursey is also among the eight hopefuls. “Lionheart” has seven pro fights under her belt, and she has been triumphant in four of those affairs. The 36-year-old debuted in 2017 and is 2-1 through her last three appearances.

One of DeCoursey’s last two victories came against fellow Phoenix Tournament participant Katie Perez. The 28-year-old rebounded from that Cage Fury loss, which came in her 2019 pro debut, and has stopped her subsequent two foes.

Lindsey VanZandt joins the Phoenix Tournament competition as an 11-fight veteran. The “Damsel” has recorded seven victories since making her pro debut in 2017. She has already clashed with three of the other members of this field.

Linda Mihalec is the eldest member of the bunch. The 38-year-old only made her pro debut in 2019. She won her first two fights against previously unbeaten upstarts, but she stumbled when she encountered the aforementioned DeCoursey.

Paulina Granados has been competing as a professional since 2013, but she has only managed a .500 mark up to this point in her career. The native Texan is now two years removed from her last MMA outing, but she seeks to make waves in her first show under the Invicta banner after previous appearances with Legacy Fighting Championship and Combate.

Tabatha Watkins is the next member of the field. At age 26, “Batgirl” is the youngest fighter here, but she’s had a rough time in her last three fights and carries a modest 3-3 record into the tournament. She debuted in 2017 and won her first three contests before falling upon hard times.

The last member of the group of eight is a late replacement. Marisa Messer-Belenchia joins the field on less than a week’s notice to replace Katie Saull, who was forced out of the competition due to travel restrictions. “Spider Monkey” carries a 3-1 mark to the Invicta cage, but her last outing was a decision loss to fellow tournament participant Mihalec.

Invicta FC Phoenix Tournament: Atomweights will be the second event for the promotion to air live on AXS TV. Fans can also find the fights on Invicta’s YouTube channel. This fourth Phoenix Tournament goes down on Friday, June 11, with an 8 p.m. ET start time. Combat Press writers Riley Kontek and Bryan Henderson preview the action as they go Toe-to-Toe.

The pairings for this one-night tournament will be made via a fan vote prior to the event. Obviously, this means we don’t have individual fights to discuss. So, let’s start by picking your favorite to win the whole thing. Who is it, and why will they win it all?

She’s ranked fifth in the world in the current Combat Press Women’s MMA Rankings, and she is coming off a very close loss in a title bid against Zappitella. She’s the most well-rounded fighter in the bracket and has the most quality cage time of the entire bunch.

Arguably, Delboni beat Zappitella, but the judges disagreed. The Brazilian showed good takedown defense and her signature solid striking. Though she took a disappointing “L,” she gets another chance to fight Zappitella if she can run through this tournament.

In a field that is a mix of experienced and up-and-coming atomweights, Delboni is the biggest threat to win it all.

Henderson: You’ll hear no argument here. Zappitella is the queen of the atomweight division, and Delboni came extremely close to edging her on the scorecards. That’s no easy feat against a fighter who has dominated other opponents with her top-notch wrestling.

In addition to her close fight with Zappitella, Delboni is also the most experienced fighter in this field. She already holds a win over fellow competitor VanZandt, and she has shared the cage with top-tier atomweight Ashley Cummins as well.

Delboni’s not a huge finisher, but she has the skills to push even the best 105-pounders to the limit. Her biggest challenge will likely come in a rematch with VanZandt, but the Brazilian should emerge with the tournament championship at the end of the night.

Who will they meet in the finals?

Outside of Delboni, she has seen the best results throughout her career. She checks in at eighth in the current Combat Press rankings, which makes her the only other ranked fighter in this field. That distinction comes partially as a result of close fights, even in defeat, against Delboni and the current Invicta champ Zappitella. These performances, as well as victories over Bi Nguyen and Rena Kubota, suggest that VanZandt is capable of succeeding against many in this group.

Kontek: Agreed. VanZandt is the next most experienced fighter behind Delboni, and she has the second-best quality of opposition. VanZandt has shown that she can hang with top fighters such as Zappitella, Delboni and Kubota. In addition, she’s well rounded and is taking on a group of fighters that rely heavily upon their grappling. If she can thwart those grapplers and use her superb striking skills, then she will be on the path to the finals.

Which fighter is the biggest longshot among this field?

Kontek: There are a few longshots in this field, but right now the biggest one has to be Watkins. The teammate of the champion Zappitella is coming off a long layoff and has not proven she can win even against lower-level talent.

Watkins has not fought since 2019. She is on a three-fight skid, with two of those losses coming by way of knockout, including one to the aforementioned VanZandt. Watkins was also knocked out by sub-.500 journeywoman Shannon Goughary.

Watkins has three pro wins, but her opponents held a combined record of 1-10 at the time they fought. There will not be any easy fights in this tournament, and Watkins has a lot to prove against a talented field of fighters.

Henderson: Watkins does indeed have a tough road ahead of her. She’s absolutely the biggest longshot, but for the sake of diversity, let’s also discuss Messer-Belenchia.

The “Spider Monkey” replaces Saull on short notice, and she’s already suffered a setback at the hands of Mihalec as a pro and DeCoursey as an amateur. Messer-Belenchia is a Brazilian Jiu-Jitsu black belt, but her skills might not be enough to get her past the grappling-heavy field in this tourney.

Messer-Belenchia has slightly better odds than Watkins, but she’s going to have her hands full if she runs into VanZandt or tangles with Delboni. She’s also already been outdone by two of the other members of the bracket. She will need a favorable first fight and subsequent luck in who she gets matched up with if she’s to advance very far in this tournament.

Outside of the finals clash, what is one other pairing you’d like to see come to fruition during this tournament?

Henderson: How about a rematch between DeCoursey and Perez? These two ladies fought in late 2019, and it was DeCoursey who walked away with the victory via a third-round finish.

That fight was Perez’s pro debut after a 4-1 amateur run. She has rebounded with a pair of stoppage victories and should be more comfortable inside the cage now. She could be more competitive this time around and perhaps even turn the tables on DeCoursey, which makes this one of the more interesting potential match-ups in the tournament.

Kontek: My colleague likes a rematch and I do too. It’s not the same one, though.

I would really like to see DeCoursey have another go-around with VanZandt. The two fought as amateurs in 2016, with DeCoursey securing a unanimous-decision victory. Since then, DeCoursey has taken fights with Invicta and Cage Fury FC and has faced some tough fighters. She even challenged for a Cage Fury title. Meanwhile, VanZandt has made appearances with Bellator and Rizin, in addition to her outings with Invicta.

Even though DeCoursey holds an amateur victory over VanZandt, the latter fighter is the one who is currently a top-10 ranked atomweight. Let’s see them run it back and find out if DeCoursey can take VanZandt’s spot in the rankings or if VanZandt can exact a small measure of revenge.

Kontek: UFC 263 and a six-pack of Atom Smasher. UFC 263 is going to be a great card, and it will be an excellent follow-up to this tournament. And Atom Smasher? It’s a brew from Two Brothers out of Illinois with a badass name that makes it great to drink while watching atomweight fights.

Henderson: A fight binge. Invicta’s tournament is one of four major MMA events set to go down within a three-day period. So, get that beer — Atom Smasher does sound like a good choice — strap in, and don’t make any other weekend plans. You’ll be too busy watching tons of men and women get punched in the face.