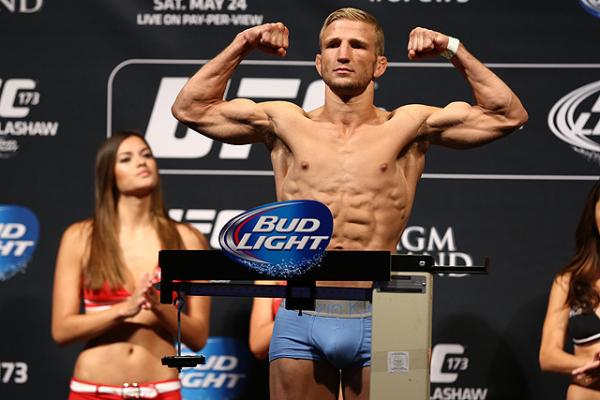 UFC on Fox 16: Dillashaw vs. Barao 2 Weigh-in Video and Results

On Friday, July 24, the UFC will host the weigh-ins for UFC on Fox 16: Dillashaw vs. Barao 2 which takes place Saturday, July 25, from the United Center in Chicago.

In the night’s main event, a long-awaited bantamweight championship rematch will finally take place as champion T.J. Dillashaw will look to prove his finish of former champion Renan Barao was no fluke. The 29-year-old Dillashaw stopped the Brazilian via fifth-round TKO at UFC 173 last spring. The pair were expected to headline UFC 177 last August, but Barao was forced out at the last minute. Dillashaw went on to defend his belt against Joe Soto, scoring another fifth-round finish.

The co-main event features a pivotal match-up in the women’s bantamweight division as former Strikeforce titleholder and UFC title challenger Miesha Tate faces off with fellow contender Jessica Eye. Tate has bounced back from a submission loss to champion Ronda Rousey with three straight decision victories. Eye, meanwhile, scored a second-round TKO of Leslie Smith at UFC 180 in November.