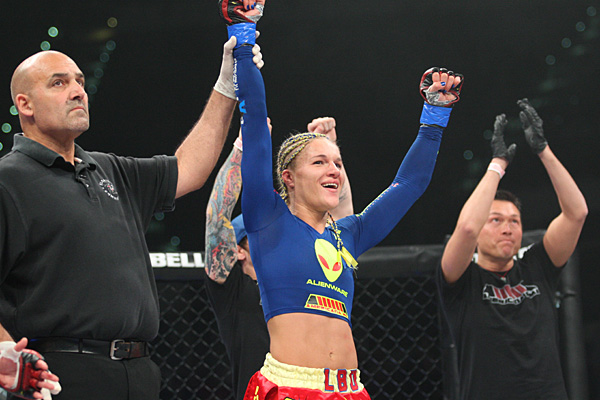 UFC’s Felice Herrig: Down, But Never Out

She’s not a stepping stone.

She’s not an easy fight for the up-and-comers.

And guess what? Simply put, Felice Herrig doesn’t care about your narratives.

As Herrig prepared herself for her most recent fight against rising star Alexa Grasso, the storylines and favoritism were heavy in favor of the young prospect, but in the end “Lil Bulldog” showed her resilience and toughness.

Coming into the fight, Herrig was very open about her battles to get both her mental and physical game back to the form she once had until she lost to Paige VanZant. After the loss, Herrig took a year off. She met with doctors to help her get through depression and physical issues that would eventually get worked out.

After her long layoff, Herrig came back with a vengeance. She secured a first-round submission victory over rising fighter Kailin Curran. The win came at UFC on Fox 20 in July 2016. Although she had already taken a year off, the additional downtime from July 2016 to January 2017 seemed to have paid off for the rebirth of Herring’s career.

As the previously undefeated Grasso came in with all eyes on her and the surrounding hype, Herrig took an opposite approach to what she’s known for in her jiu-jitsu game. Herrig, a BJJ purple belt, has secured four submissions in 12 career victories in her professional career, but it was her striking that got the job done against Grasso.

Following the impressive and somewhat surprising — at least to those outside of Herrig’s circle — win, she called for the ultimate redemption. In her post-fight interview with Fox Sports 1’s Brian Stann, Herrig was asked who she’d like next. Her answer? VanZant. However, she also called out Michelle Waterson, whom she was supposed to fight before she took the VanZant fight.

A confident and exuberant Herrig said that the version of herself that fought VanZant wasn’t the “Lil Bulldog” that UFC and MMA fans have come to know and love, and she’s out to prove it. While VanZant most recently took a loss to Waterson, Herrig’s call-out makes the most sense. Coming into the fight, Herrig was unranked. After derailing the hype of both Curran and Grasso, a big leap into the top 15 should be coming for Herrig.

Now that she’s returned with both her mental and physical games in top shape, Herrig has begun her redemption tour. It’s unknown who exactly is next for Herrig, but she’s made it clear that the “Lil Bulldog” is back and she’s creating her own story.

They say a loss can make or break fighters. While Herrig may have suffered a setback when she was defeated by VanZant, she’s definitely not broken. Herrig has picked up the pieces around her and her career. The rebirth is off to a great start.