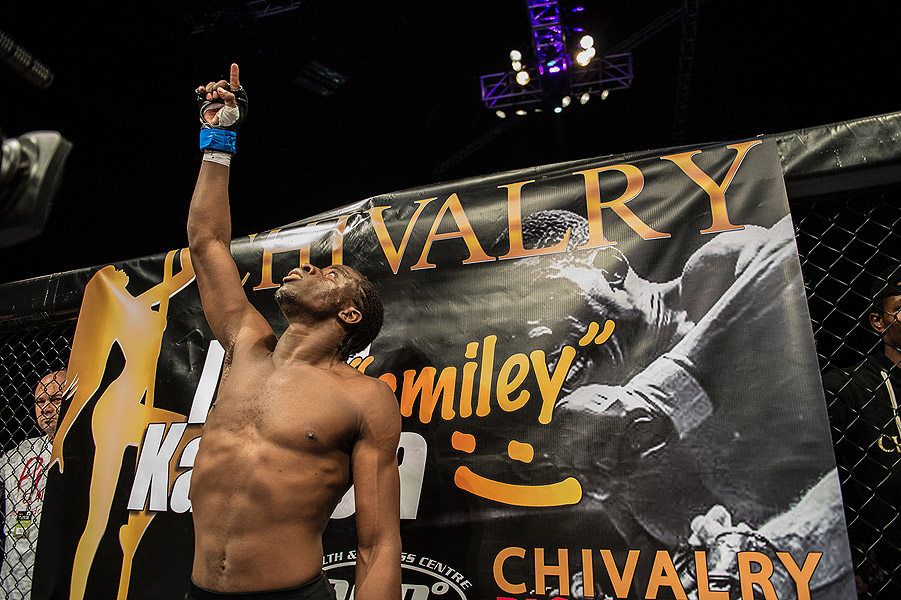 Wrestling and mixed martial arts go hand in hand. In the modern era of MMA, if you can’t wrestle, you can’t make it.

In a country like the United States, it’s not that big of a deal. Wrestling programs are readily available for most people. It’s a sport that, while not everyone undertakes, they are certainly familiar enough with it. The idea of donning headgear and forcing an adversary down to the mat isn’t as common in other corners of the globe, however, and that often shows when it comes to the dominance that the United States exerts in the realm of MMA.

Wrestling isn’t exactly the sport of choice for youngsters in Africa, it is still around, albeit nowhere even close to the way it is in the United States. Igeu Kabesa was a wrestler. He learned to survive through the sport. He learned about dedication. And he learned what it truly meant to be tested physically and mentally.

These days, Kabesa is a mixed martial artist fighting under the Extreme Fighting Championship banner. For his next test inside the EFC’s Hex, Kabesa is set to meet Irishman Peter Queally, whose record stands at 5-1. It’s a completely different feeling to that of when Kabesa first started wrestling. He knows exactly what is going to happen when he steps foot inside the Hex. But all those years ago when he first started competing as a wrestler? Well, back then, it was anybody’s guess.

“I didn’t know what to expect,” Kabesa admitted to Combat Press. “[I remember] my first big tournament and the first time I won nationals. But, it was all a game till I got older. My wrestling always helps me, and I’m also well rounded. Let’s see what he brings, ’cause I can’t wait to compete with him”

The last time that Kabesa fought, he came out with a first-round TKO victory over Saxon Delafield at EFC 38. The win gave him his first taste of MMA action for 2015, and it sends him into his EFC 40 clash with five wins and no defeats.

“It’s great to win. I didn’t expect to finish the fight so early, but I had fun,” Kabesa recalled. “It’s a great feeling. I expected something else.”

In Queally, Kabesa is fighting an opponent who has captured all five of his professional victories by way of decision. Kabesa, who has gone the distance just twice, isn’t accustomed to fighting a full 15 minutes. The undefeated 19-year-old takes a great deal of pride in finishing his fights. No matter what happens inside the cage, though, the end goal is to be the one whose hand is raised.

“We might go to decision too, but I don’t mind. I like going to distance,” Kabesa said. “At the same time, I wanna prove that I’m much better as an athlete, so [I’m] going to put up a high-pace fight.”

After making a successful EFC debut at EFC 35 in November 2014, Queally will make his second trip to the Hex on June 6. The Irishman trains out of SBG Ireland, alongside such stars as Cathal Pendred and the infamous Conor McGregor. Queally may train with some of the best that Irish MMA has to offer, but Kabesa boasts an impressive pedigree of his own. The former wrestler is eager to test his will against the hype of the fighting Irish.

“Well, it means nothing, hey,” Kabesa stated. “I also train with three of Africa’s titleholders, and I myself have been competing since I was eight. Trust me, I’m used to this — is he?”

It’s a very real possibility that Kabesa could add a sixth professional victory and remain undefeated, but he’ll have to dispatch of his most formidable opponent to date. Queally boasts a great deal of worldwide experience, but Kabesa will enter the Hex with his country behind him. The surging lightweight would like nothing more than to win in front of a hometown crowd.

“It will mean the world to me,” Kabesa said. “[Being undefeated] makes me work harder than I worked the last training camp, but my record shows my hard work. I know I’ll win. I’m fighting in my hometown and have family around. I have been waiting to fight in Carnival City.”