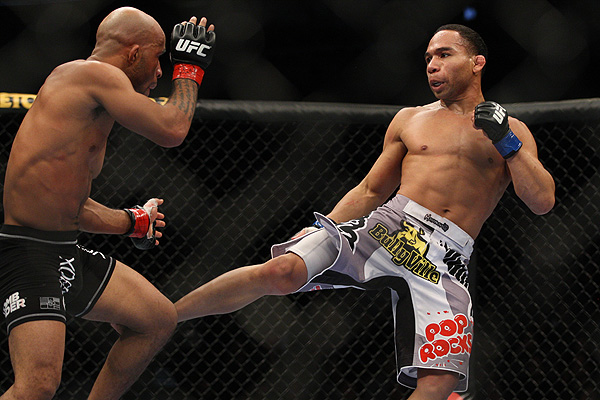 A trip up or down in weight usually benefits a fighter. The fighter either has an easier weight cut by going up, or goes down in weight to gain a better size advantage. In the case of John Dodson, two flyweight title fight losses have led to a move up to the bantamweight division.

Dodson has previously fought at 135 pounds while in the UFC. It was only during his time in The Ultimate Fighter competition, which included a victorious effort over future bantamweight champion T.J. Dillashaw in the show’s finals. The 31-year-old Dodson looked great against the other competition on the show with his quick movements and fast hands. His abundance of energy also gave opponents trouble.

Dodson then moved down to flyweight, his natural weight class, and has been one of the best fighters in the division since the move. His two aforementioned title defeats came against the king of the flyweight division, Demetrious “Mighty Mouse” Johnson. There is no shame in the losses, considering how far ahead Johnson is from the rest of the division. One can also consider how close Dodson fought Johnson in their first affair. It was an overall successful drop for the former TUF winner.

A move up does put Dodson at a distinct disadvantage. It’s no secret that his size will make him the smaller fighter in most potential match-ups. Dodson could have trouble with, say, former bantamweight champion Dominick Cruz. Cruz was able to handle a similarly small fighter in the aforementioned Johnson when the two fought in 2011. Now that doesn’t necessarily equate to the same thing happening to Dodson, but it is worrisome. Giving up so much size could be detrimental to a run against the top of the division. This is especially true if Cruz is able to beat Dillashaw in their upcoming title fight and reclaim the throne.

Dodson should have a great time at bantamweight, though, all things considered. His run on TUF laid out a good showing of the potential Dodson could have in a division where he even topped a future champion. Dodson didn’t really face anybody much bigger than him, and even when he did — in his fight against Johnny Bedford in the semifinals — he was able to shine and get the knockout victory. Naysayers can point out the size disadvantage, but Johnson was able to make a successful run in the division at a similar size. He wasn’t a champion, but he was successful.

Everybody defines success differently. Some might say being successful means being the champion. That isn’t necessarily how it should be viewed. Not everybody can be champion. Some never raise the trophy or get a belt strapped around them. Dillashaw has drastically improved since his TUF days and would probably beat Dodson in a second fight. Cruz is another fighter who would probably come out victorious over Dodson. However, the former flyweight title challenger will be a winner at the bantamweight level. Championship status might be out of the realm of possibility, but we can’t rule anything out. Everybody has a chance, and Dodson has shown before that he has a wealth of potential. It’s just all about reaching that mark.

Dodson’s quickness, cardio and hand speed is just too great for some fighters. That remains true even if he packs on an additional 10 pounds. He could easily be a top-five fighter if he fights anywhere near the level of his flyweight days. Plus, he can get around the dilemma of a third title shot by possibly facing a champion who he has defeated before.

At flyweight, Dodson is stuck in a title-picture quagmire. He can keep building to the top, but his two previous losses make the required amount of wins needed to get back to a title fight so much greater, and that is only if the line ahead of him is vacant.

At bantamweight, Dodson not only has the chance to quickly establish himself as a contender, but he has a storyline that adds intrigue to a potential title showdown with Dillashaw.