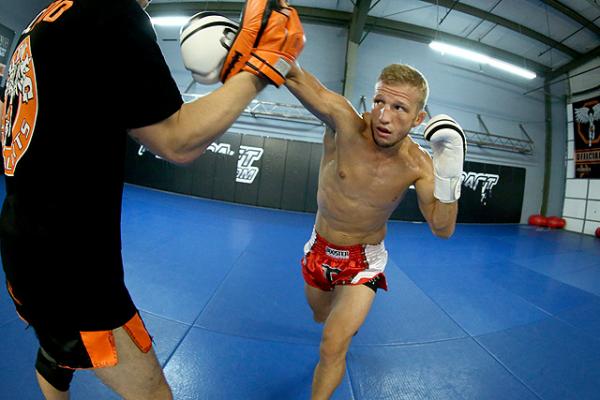 The injury bug has struck once again.

UFC bantamweight champion T.J. Dillashaw suffered a rib injury in training and his rematch with Brazilian Renan Barão has been pulled from UFC 186 on April 25 in Montreal.

The pair met last May at UFC 173, with Dillashaw scoring a fifth-round TKO win to capture the 135-pound title. The loss snapped Barão’s 33-fight undefeated streak that dated back to 2005. They were expected to rematch at UFC 177 in August, but Barão fell ill during weight cutting and was forced out of the bout. As a result, Dillashaw faced late-notice challenger Joe Soto and earned another fifth-round stoppage.

Barão bounced back from his title defeat in December, submitting Canadian Mitch Gagnon via third-round arm-triangle. The victory earned him a shot at revenge against Dillashaw once again, but now those plans have been put on hold.

As a result of the fight being pulled from the event, the scheduled flyweight title bout between champion Demetrious “Mighty Mouse” Johnson and challenger Kyoji Horoguchi has been elevated to the main event. The light heavyweight contest between former champion Quinton “Rampage” Jackson and Brazilian Fabio Maldonado will serve as the new co-main event. Finally, the lightweight match-up between Abel Trujillo and John Makdessi will move to the main card.

UFC 186 takes place Saturday, April 25 from the Bell Centre in Montreal, Quebec, Canada. The night’s main card will air live on pay-per-view with the preliminary card split between a stream on UFC Fight Pass and a broadcast on Fox Sports 1.