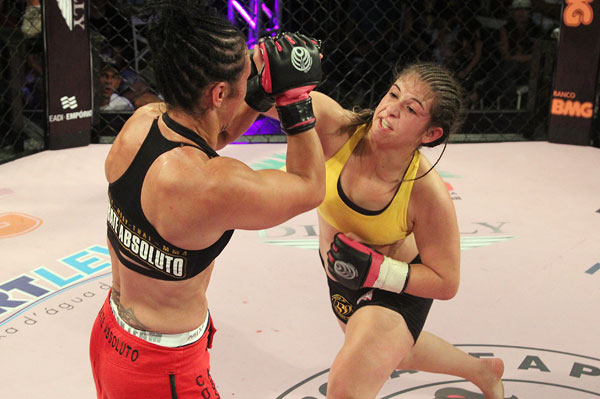 Twenty-nine years: the average age of the seven women who have worn Invicta gold around their waists at the time they captured the belt.

Twenty-two years: the age of Herica Tiburcio when she makes her promotional debut on Dec. 5 at Invicta FC 10 in Houston.

The Brazilian will challenge current atomweight champion Michelle Waterson for the 105-pound title in the night’s main event live on UFC Fight Pass.

“I believe there is no age to be a champion,” Tiburcio proclaimed. “Jon Jones was a very young champion in the UFC and I want to be the youngest Invicta FC champion.”

The native of Bragança Paulista, which lies roughly an hour’s drive north of São Paulo, was originally tabbed to face Ayaka Hamasaki at Invicta FC 9 in November. However, due to issues with the visa process in her native Brazil, she was forced out of the bout. Little did she know that the unfortunate circumstances would be a blessing in disguise.

“I was disappointed,” recalled Tiburcio of the cancellation. “But sometimes bad things comes for better things in the future. I believe in God and I put everything in his hands. Look at the outcome: a title fight.”

With the stakes raised for her debut, it would be easy to understand if Tiburcio was battling nerves in anticipation of her first bout in the United States. Yet, the Gato Team/Inside Gold Team/Barbosa B9 fighter remains largely unfazed by the change.

“I’m a bit nervous, yes, but my happiness is much bigger,” quipped the Brazilian. “Whatever Shannon [Knapp] and Julie [Kedzie] wants me to do, I will. I have never chosen a fight in my whole life. I’ll fight anyone, anywhere.

Although Tiburcio may be six years younger than champion Waterson, the Brazilian doesn’t lack experience. She’s already competed 10 times as a professional in her home country, winning eight times. And of those eight career victories, six have come by either armbar or guillotine choke. Similarly, Waterson has earned seven of her 12 career wins on the ground.

“I trust a lot in my BJJ, and her submission wins don’t affect me,” Tiburcio declared of her match-up with the champion.

Despite her confidence on the mat, Tiburcio isn’t underestimating the reigning queen of the 105-pound division. With both fighters possessing proven ground prowess, a battle on the mat would seem inevitable when the cage door shuts in Houston. However, Tiburcio is expecting Waterson to live up to her moniker of “The Karate Hottie.”

“She is the champion for one reason: she is very good,” admitted the challenger. “I guarantee there will be a lot of striking in this fight.”

Tiburcio may be a new face to Invicta FC, but it’s no surprise that she’s undeterred by her clash with the champion. After all, she’s spent a large portion of her career competing outside her natural weight class, even squaring off against former Invicta No. 1 contender Claudia Gadelha in her native Brazil.

“Most of my fights were at 115 [pounds], but I feel that 105 is a better weight class for me. I’m feeling very good, and I’ll be very strong on the day of the fight,” she predicted.

Just the opportunity to compete under the Invicta banner is something that Tiburcio is relishing. She’s determined to make the fans take notice of her presence with the promotion.

“[This is] the realization of my biggest dream. I always wanted to fight for Invicta and I plan to be here for a very long time,” said Tiburcio.

So what does the young fighter think of her chances at leaving the cage as the youngest champion in promotional history?

“If God wants it, I’ll be the new Invicta FC champion.”

Herica would like to thank God, her family, all of her training partners, her team: Gato Team, Inside Gold Team, Barbosa B9, her manager: Stefano Sartori and all of her fans. Follow her on Twitter: @Herica_tiburcio